If Fresh Off the Boat‘s tiger mom Jessica had any say about it, jolly old Saint Nick would have an MBA.

Along those lines, this Tuesday’s Christmas installment of the ABC comedy (airing at 8:30/7:30c) is “all about making sure Santa Klaus lives up to Jessica’s standards as a role model for young Evan,” star Constance Wu previews. And Kris Kringle’s current qualifications are definitely not up to par.

“He’s either a toymaker or a glorified delivery man,” Jessica argues in TVLine’s exclusive video. “Either way, he’s labor, not management.”

While mom is busy sprucing up Santa’s resume, “the older two kids have their own storyline, which is all about different strategies for how you 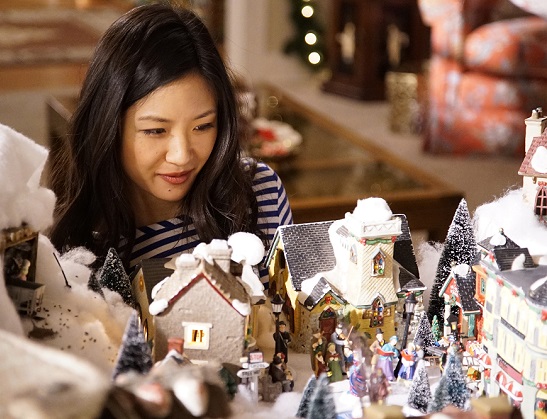 pick gifts for people,” Wu shares. Given how frugal the family’s matriarch has been in the past — how could one forget the Huangs’ cost-cutting, first family vacation? — Wu thinks “viewers will be delighted to see that when it comes to Christmas, Jessica is very much in the Christmas spirit, and she loves gifts and giving them and celebrating.” (She even has a beloved Christmas village-building tradition!)

So what would be the ideal present for the hard-to-please mother of three? “Oh, gosh, I don’t know!” Wu replies before pausing and offering up this perfect suggestion with a laugh: “A Harvard acceptance letter from one of her children?”

The holiday episode also features two treats for fans of the show: one of Wu’s favorite Jessica lines — “It has to do with the construction signs that say, ‘Men at Work,'” the actress hints — as well as a very funny scene “when the real Santa shows up at the very end.”

Press PLAY above to watch the sneak peek, then hit the comments with your thoughts on Fresh Off the Boat‘s first Christmas episode.