Fans of medical dramas, particularly ER, know exactly what that means: a harrowing situation in which a doctor must save a patient — often a child — out in the field by themselves, with very few resources. For Christa, you can add a debilitating injury to the doc’s list of challenges as she attempts to help a mother and her two kids after their car plummets over the side of the road.

TVLINE | This week is the big fall finale. What’s in store for the hospital staff?
The team is going out in the field, which is a very rare thing. There’s a huge, massive pile-up of car accidents on the freeway, and we all have to split up and search for people that we can treat or people that can’t make it. So it’s pretty intense.

TVLINE | For Christa, what’s the biggest challenge in this situation?
Christa actually gets separated from the group, and she gets injured on her own, trying to save a family. Their car’s gone over a ravine. She has to perform surgery with a dislocated shoulder, and they’re trying to wait and see if someone will find them. It’s pretty heavy.

TVLINE | What’s her biggest asset and her biggest weakness in a scenario like this?
Well, her weakness is that she dislocates her shoulder, and she only has a little travel medical-bag kit. So she doesn’t have all the tools she needs or the medicine she needs. That’s a huge weakness because she’s got to treat an injured mother and son. Her biggest asset is the little girl (played by Ben and Kate‘s Maggie Elizabeth Jones) who helps her do the surgery. She’s just this little genius that basically assists her the whole time, and they bond. She’s a little wunderkind.

TVLINE | Christa had a husband, but she’s single now. Is her heart open to love at this moment?
She’s becoming more open as time goes on. She was really devastated when we first met her — her son had just died and her husband left her. Being around these people [at the hospital], you certainly become vulnerable and sensitive, and you get really close. So I think she’s open. I hope so! [Laughs] 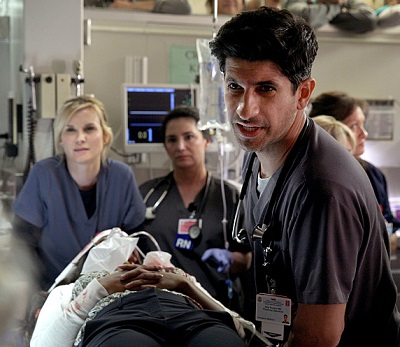 TVLINE | There appeared to be something percolating between her and Neal (played by Raza Jaffrey). How will that progress?
You’ll have to stay tuned to see, but they definitely have a connection, for sure. Who wouldn’t?! I mean, come on!

TVLINE | And what does she think of Mario right now? They got off on the wrong foot in the pilot.
They work together, and he’s obviously been changing and learning and becoming more open and sensitive as the weeks go on. Are they becoming friends? They work so closely together, I think she would support any of her coworkers no matter what.

TVLINE | I’ve seen you sing in person with Band on TV. Will you be doing that on the show one day?
Any opportunity for me to incorporate singing, I’m totally down with it! So if anyone wants to pitch that to the writers… Maybe Christa sings some time during surgery or goes karaoking with Neal or she sings to a patient. [Laughs] I don’t know if it’s something Christa would do, but I certainly would love it.

Watch a sneak peek of the episode below.