It’s not a Chicago Fire fall finale cliffhanger if someone’s life isn’t hanging in the balance.

Tuesday night’s episode is no exception, with one firefighter in a bloody situation at the close of the hour. However, the potential death doesn’t happen on the job, but rather at beloved hangout Molly’s!

After Cruz’ pal Freddie is ousted by Patterson from hanging around the firehouse, Otis and Herrmann take pity and offer him a job at the bar as a busboy. But Herrmann’s repeated ribbing about Freddie’s appearance does not sit well with the temperamental kid, who finally loses it after Herrmann jokes about him looking for short and fat glasses – just like he’s short and fat. Freddie wants his new boss to take it back, but Herrmann thinks he needs to lighten up. So Freddie stabs Herrmann with a steak knife and leaves him in a pool of his own blood as everyone in the bar remains unaware of the horrific scene in the stock room.

One person who’s also on his way out? Patterson. While Boden awaits the case against him, the controversial captain gets promoted to chief, much to everybody’s dismay. But maybe the tide is turning? After a heroic rescue, Patterson talks to a reporter – that guy really loves a camera, doesn’t he? – and unexpectedly showers the team and Boden with praise.

Then when the chief is exonerated, Patterson tells Riddle he’s requested a transfer because “this is Boden’s house.” He also makes it clear he’s not a fan of Riddle’s methods anymore.

“You’ve messed with the wrong guy,” Riddle exclaims. Patterson warns Boden that guys like Riddle tend to have nine lives, so keep an eye open.

* With Boden back in charge, Severide is reinstated. 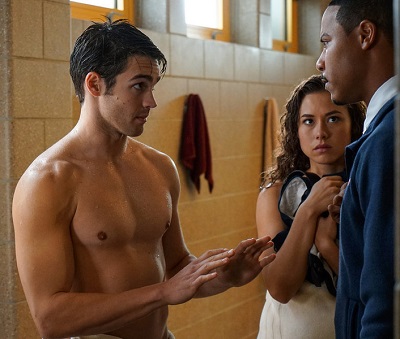 * Casey advises Jimmy to cool it with Chili to keep things smooth sailing in the firehouse. After Patterson catches the twosome in the shower and gives them a stern warning, Jimmy tries to cut things off with Chili. She is not a fan of that idea, to put it mildly.

* A string of suspicious incidents that would discredit Firehouse 51’s finest tie back to Rodger Maddox, and everything leads to Serena, the troublemaker currently wrecking Boden’s life. So Severide takes it upon himself to find her, with an assist from Chicago P.D.’s Atwater and Ruzek and, shockingly, a helpful tip from ex Jamie.

* Being sweet on Sylvie himself, Otis goes digging into Austin’s past to try to find something to discourage the paramedic from dating the smooth operator. He discovers that Austin was charged for breaking and entering —but it was just a case of pool hoping, Austin confesses to Sylvie on their date. (Sorry, Otis.)

* Dawson loses her cool during a rescue when some onlookers make sexist comments. Unfortunately for her, it gets captured on camera and is broadcast on the local news. And the guys who made the lewd remarks? They were hired by Maddox to harass Dawson.

Chicago Fire fans, what did you think of the episode? Grade it via the poll below, then weigh in on Herrmann’s fate in the comments!