TVLine asked Marvel’s Agents of S.H.I.E.L.D. fans if you were done, finished, finito with the treacherous Grant Ward, especially on the heels of him gunning down Rosalind Price and then overseeing the torture of Simmons and Fitz.

For those who voted “yes” to wishing Ward gone, Tuesday’s midseason finale ultimately satisfied you… and then ripped the rug out from under you.

On the other side of the portal, Ward and his HYDRA henchmen dragged Fitz around, while Coulson was roused back to consciousness by a vision of Rosalind. Soon enough, Fitz located the hatch to Will’s subterranean hovel and leaped inside. Ward & Co. followed, but spared the spaceman’s life because Fitz insisted he was the key to finding the mighty Inhuman they were tasked with bringing back to Earth.

Will and Fitz bonded as they trekked across the terrain, where Will led them into a sandstorm. In the frenzy, he took out several HYDRA soldiers. By the time Ward did realize what was afoot, he was taking fire from Coulson.

Will/Fitz and Coulson/Ward then continued their journey through the “No Fly Zone” to the portal location. Arriving at a ridge, they looked out over the remains of an ancient civilization. Will related how the planet was once home to nine cities, but the beings warred amongst themselves to extinction, never realizing their “beautiful” potential. Fitz rightly asks, “How do you know so much?”

“Because I was there.”

Concurrent with hearing that tidbit, Fitz takes a gander at Will’s wounded leg, which he discovers has a massive cavity revealing exposed bone. Realizing that Will is no longer just Will, Fitz tries to flee, but a scuffle ensues. Will gains the upper hand and goes to crush Fitz’s bean with a boulder, but Coulson intervenes with gunshots. Ward seizes that opportunity to make a run for it, and his and Coulson’s own skirmish gets underway.

Seeing “Will” making tracks for the portal, Fitz grabs Coulson’s gun and puts five bullets into the being, felling it. When it rises up again, Fitz fires a flare gun, turning his target into a ball of flame.

Coulson and his Mitt of Might meanwhile best Ward, and then pin him down. With his prosthetic pressed against wheezing Ward’s chest, Coulson is poised to snuff his foe but holds back … until a memory of Rosalind enters his brain. Reminded of that fresh wound, he bears down and finishes Ward off. But as Coulson and Fitz race for the closing portal, we see a slug-like something slither out of incinerated Will’s mouth….

During all of this interplanetary action, Mack carefully preps a team that includes Daisy (have they never called her Quake?), Lincoln and Joey to infiltrate the HYDRA-fortified English castle and seize control of the portal. Simmons meanwhile uses a Lincoln-induced power outage to escape confines. Stumbling upon and hearing out caged-up Andrew, she makes the decision to unleash Lash on Malick’s goons — which proves a little too effective, May later discovers, as the prickly beast also mauls to death his fellow Inhuman captives.

With the seconds ticking away, HYDRA at their doorstep and no one knowing what might break on through from the other side, interim S.H.I.E.L.D. director Mack makes the call to launch an airstrike on the castle, turning it into rubble… though not before an escape pod carrying him, Daisy, Fitz and Coulson flees the destruction. Back on the Bus, Daisy, Fitz and Coulson are embraced by Lincoln, Simmons and May, while Coulson and Fitz trade a look that speaks volumes about what happened on the planet. Speaking of….

In the post-credits coda, Malick is fleeing to the airport when what appears ahead of his car in the middle of the road but Grant Ward — or, let’s say, “Grant Ward,” who is in possession of the hand Coulson “killed” him with and is now the human host to whatever slithery thing creeped out of Will. Malick seems to recognize what has transpired, and smiles a pleased, sinister smile….

After screening the episode, 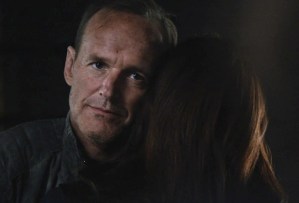 TVLine invited Clark Gregg to weigh in on Coulson’s deadly blow and the ticking bomb now set to one day blow up in S.H.I.E.L.D.’s face.

TVLINE | When you first opened the script for this episode, did you know which way it was going to go when Phil had Ward pinned down?
No. I didn’t know. I knew that I was going through the portal and that Ward was on the other side. I knew that it was going to be a pretty final showdown, and yet I was not prepared for reading that script. There are a few scripts over the course of the 55 or whatever we’ve done that generate a stunned text [message] thread amongst the cast, and this was one of the most active and shocked text threads. At the same time, I love what they came up with in terms of paying off the showdown in a completely final way, but at the same time leaving us the brilliant Brett Dalton still to play with.

TVLINE | Do you think the memory that Phil had of Rosalind was the last nudge he needed to go ahead and kill Ward?
I do. I do. It’s such an interesting moment they wrote, because he couldn’t leave Ward on the planet. It really gets down to the heart of leadership. I think [Coulson] is going to spend some time trying to figure out whether it was an act of vengeance or an act of protecting others, or both. But I don’t think it’s going to sit well.

TVLINE | You could see that in the look that you and Iain [De Caestecker] exchanged at the end. You can tell that a lot was weighing on Phil in the aftermath.
Yeah, I think it’s something that was really touched on in the episode. There are a lot of ways in which Ward and Coulson were on very parallel and linked journeys, and in some ways they both undergo very deep transformations in that episode, from which they will never wholly return.

TVLINE | As far as Phil knows, Ward’s dead back on the planet, so I can’t even imagine the team’s reactions if they ever lay their eyes on this thing that he has become.
Yeah. It’s not something we’ve arrived at yet [in filming], but it seems to be a pretty astonishing moment that probably lies in our future.

What did you think of the episode “Maveth,” Coulson’s choice and Ward’s “resurrection”?