Weird silhouetted people popping out of one singer’s backdrop like unwelcome whack-a-moles. Judges spending more time discussing another contestant’s pre-performance “confidence issues” than her actual vocal. A third artist being forced to perform in the midst of a baffling outdoor café set — complete with hedges and a monstrous video of a fountain — then being damned with faint praise for delivering “the most different thing I’ve heard on the show.”

Welcome to The Voice Season 9 semifinals — and the seeds of my runaway conspiracy theories blooming like the “Gurl, whaa?” braids and topknot springing forth from Gwen Stefani’s adverb-averse noggin.

It wasn’t just sabotage unfolding before us — but also Lady Justice’s scales being stacked with slabs of steel in favor of certain contestants and coaches.

Shock of shocks, Adam Levine’s team snagged the last two performance slots — long proven to be the ideal positions for garnering reality-show votes — with He Who’s Gotten the Pre-Ordained Winner’s Edit all season long landing the pimp slot yet again… only this time with a full gospel choir and a light show that I suspect cost more than what they’re paying poor Christina Grimmie to do those advertorials for Kohl’s.

At this point, the question is really about whether NBC bothers to let four vocalists duke it out on next Monday’s performance finale — if you haven’t heard, five artists are getting axed on Tuesday’s Top 9 Results Show — or just air a two-hour Jordan Smith concert special.

Sigh. Sorry for the vitriol, readers. I can’t try to pretend Jordan wasn’t absolutely stellar this week — even as someone who’s found some of his prior efforts a little overrated/overbaked/underwhelming. But the tidal wave of favoritism he’s been riding has essentially wiped out the joy of Season 9 – and left the remainder of the contestants treading water, waiting for the Bastard Executioner (AKA Carson Daly) to scream, “Off with their heads!”

While you ponder whether I’m onto something or merely miffed that only two out of four coaches were allowed to give feedback to Jeffery Austin, let’s cut to my letter grades and reviews for this week’s performances: 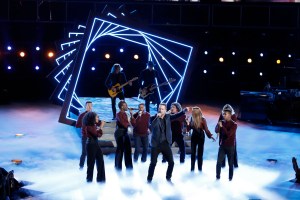 Team Blake: Barrett Baber, “Ghost” — Grade: C- | The sparse, echo-y guitar arrangement of Ella Henderson’s pop jam exposed Barrett’s wobbly, occasionally inaudible lower register and lack of breath control — both on the verse and in the chorus. Like a salmon swimming upstream just as a family of brown bears wades into the water, this was a particularly inopportune time for Barrett to make the wrong move — and I suspect he’ll be the first Team Blake casualty of Season 9. 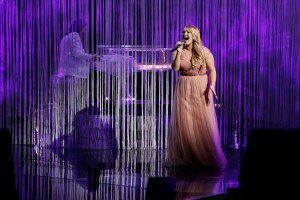 Team Adam: Shelby Brown, “Even God Must Get the Blues” — Grade: B | Given yet another questionable pre-performance edit and withering feedback from the coaches — “You did very well” is about the most unenthusiastic critique Pharrell has ever given, no? — Shelby needed to be great, not merely good this week. Unfortunately, the lack of real crescendo in her song choice — combined with some dubious enunciation and a few flat notes in the verse — once again prevented her from delivering the kind of performance at which her Blind Audition rendition of “Stars” hinted several months back. 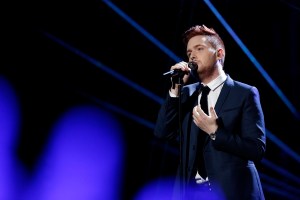 Team Gwen: Jeffery Austin, “Believe” — Grade: A- | You want to talk about the glowing doors opening and closing behind Jeffery and the random men and women standing there contemplating the existence of life after love? You go ahead and do it in the comments. I’ll just say that while Jeffery hit three or four iffy notes while deconstructing Cher’s dance classic into a contemplative piano ballad, he did it with grit and gorgeous tone and (as per usual) an innate ability to call attention to the lyrics. I’d have liked to see a little more over-the-top enthusiasm from his own coach, but I think Blake genuinely meant it when he said the under-the-radar redhead deserves to make next week’s finale. 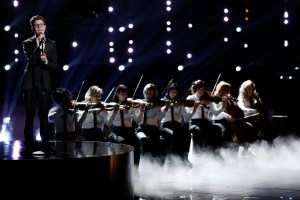 Team Gwen: Braiden Sunshine, “Amazing Grace” — Grade: C+ | I’ll start by saying something nice: Braiden definitely hit a higher percentage of his notes this week than at any point in the competition. But his approach to this classic hymn was neither meditative nor soaring. It was just… there. (Maybe because the high-schooler seemed to be approaching the lyric from the jumping-off point that he was “saved” by last week’s Twitter vote.) Oh, and it kinda felt like it went on for 17 minutes. Pharrell’s remark that Braiden is giving hope to children aged 10, 11, 12 was one of the more bizarre avoidances of actual critique in Voice history — but given the typically huge sales for religious tracks by Voice artists, this one might’ve been bulletproof anyhow. 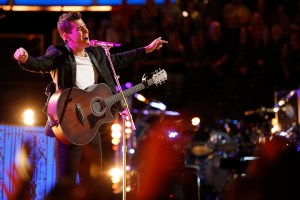 Team Blake: Zach Seabaugh, “The Climb” — Grade: B- | Zach admitted during last week’s results show that he was overdue to prove his vocal chops to America, and with a solid-albeit-unspectacular cover of Miley Cyrus’ pop-country ballad, he kinda sorta accomplished his mission. I mean, by standing still and (every once in a while) strumming the guitar around his neck, the Georgia teen kept a consistent grip on pitch — and the little grin on “these are the moments I’m gonna remember most” was a nice touch, too. Ultimately, though, the uppermost peaks of the melody exposed the tonal thinness of the “teen heartthrob” (Carson’s code word for “isn’t he good-looking?”). If you need an army of backup vocalists to scale Mt. Miley, should you really be covering the Arist Formerly Known as Hannah Montana in the first place? 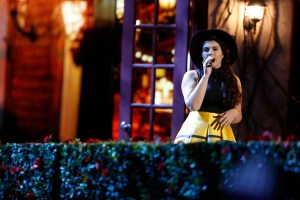 Team Pharrell: Madi Davis, “Big Girls Don’t Cry” — Grade: A- | Can I get a slow clap for Madi? While most contestants approach the semifinals with a laser-focused emphasis on big vocals and emotional moments, she went with a feather-light Frankie Valli jam, turned it into a small-stage accordion jam and fluttered around the melody like a zany hummingbird allowing the windstream to carry her wherever it saw fit — deliberate swoops and pauses and all. Oh boy — I may have overwritten that sentence in an effort to avoid discussing the awesomely awful café-from-hell backdrop (complete with vacant patrons!) Pharrell didn’t stop from happening. But while Madi lost a bit of focus when she set down her guitar and got up from her little sidewalk table, there was nevertheless something almost subversive in her failure to pander for votes, in her commitment to doing her own thing — even if it prevents her from a slot in the finale. And isn’t that what being an artist is all about anyhow? 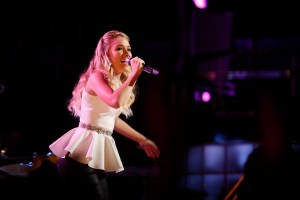 Team Blake: Emily Ann Roberts, “9 to 5” — Grade: B+ | I’m pretty convinced Emily Ann is a mortal lock for the finale — and I’m almost convinced she should be. The teenager’s homemade-honey sweet upper register and not-entirely-polished charm are hard to resist — but it’s her ability to lock onto a melody and stay in near-perfect pitch that’s probably her biggest weapon. My only complaint tonight was that Emily Ann’s reading of “9 to 5” was so faithful to Dolly Parton’s original, that it left me wondering, “Why not just listen to the original?” (Side note: Was Emily Ann’s repeat of the “tumble out of bed and stumble to the kitchen” verse a mistake — or did she just need to run down the clock and decide to repeat the five or six lines even the most fleeting country fan can deliver at karaoke?) 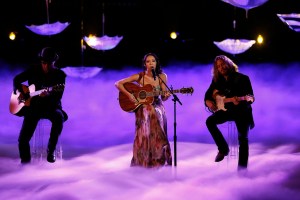 Team Adam: Amy Vachal, “To Make You Feel My Love” — Grade: B- | I appreciated the depth of emotion Amy brought to her stripped-down Dylan cover — there were a few moments when the jazzy chanteuse actually sounded choked-up — but unfortunately, those moments also tended to throw Amy off pitch. And that’s a tough thing to forgive in a singer who tends to reduce even her most complicated covers to a fairly limited range. Granted, Amy’s gauzy tone and undeniable beauty might make her the biggest potential star to emerge from Season 9, but from my couch, I’ve never seen enough vocal mastery or edgy attitude to carry her past her more technically impressive rivals. The second-to-last performance slot — and her choice of an achingly romantic number — might carry her to the finals anyhow, though. 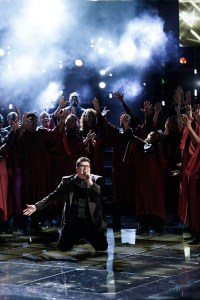 Team Adam: Jordan Smith, “Somebody to Love” — Grade: A+ | Take away the seizure-inducing lighting. Take away the full choir that backed him from Note One. Take away obnoxious Adam Levine’s mugging and whooping and literal mic-dropping. Strip all of the accouterments away, and what are you left with? This week, in Jordan’s case, a stunning and peacock-ian vocal — grandiose but utterly self-assured, dialed in to the desperation of the lyric, and yet also self-aware enough to betray the occasional “whoa, I am totally slaying this!” grin. My underdog-loving heart may never totally embrace him — and my heart-over-head inclinations may never prompt me to download him — but this week, I have to tip my hat to Jordan and recognize his shutting-s**t-down fabulosity. He sung what he brung, and even if Mark Burnett & Co. had it wrapped up in a bow beforehand, he stole the semifinals anyhow.

Will Be Bottom 3 (and Immediately Eliminated): Barrett, Shelby, Madi
Will Be Top 3 (and Immediately Advance): Jordan, Braiden (ugh… people are Tweeting he’s already Top 10 on iTunes before the show is over), Emily Ann
Will Be Fighting for the Twitter Save: Jeffery, Amy, Zach

What did you think of the Top 9? Who were your faves? Who’s in trouble? Take our poll below, then sound off in the comments! 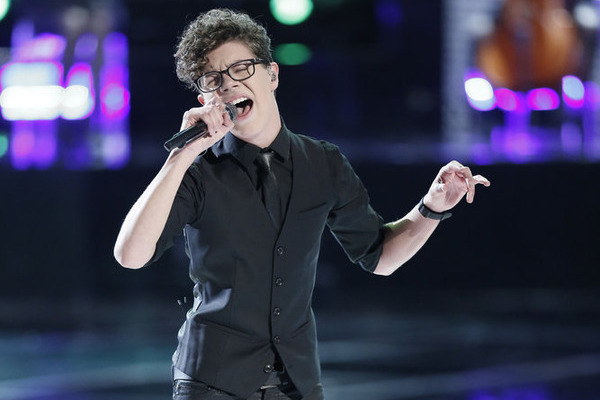