And yes, as future Lou would tell Lorne Malvo, you could climb to the second floor if you stacked the dead bodies.

The season’s penultimate episode opened on a much lighter note, with a bit of a jurisdictional squabble as the Sioux Falls troopers elbowed Minnesota colleague Lou Solverson out of the way, seizing control of the bananas Blumquist case. Finding the meek-turned-mighty marrieds in the remote shack with dead Dodd and a meet with Kansas City’s Mike Milligan on the menu, the Sioux Falls guys get the idea to wire Ed for his rendezvous with Milligan. It is when Lou strongly opposes that notion that he is shooed away.

On his way out, Lou stops at the filling station that played a pivotal role last week, where Ed would make his calls and where Hanzee got the 411 on the heavy-set red-haired man. Lou discovers the dead clerk that Hanzee dispatched with, but when he tries to loop in a local trooper, he is literally escorted to the state line — all the while unaware that the reason wife Betsy didn’t answer the phone when he called to check in is because she had collapsed in the kitchen :(

Meanwhile, Hanzee reports back to the Gerhardts that he “found” Dodd — in the custody of the Kansas City guys. Here, the narrator for the episode’s “True Crimes” framework shines a spotlight on Hanzee’s series of peculiar actions, starting with how he lied about Rye’s death. What is driving him, and how far will his duplicity go?

That in part is answered 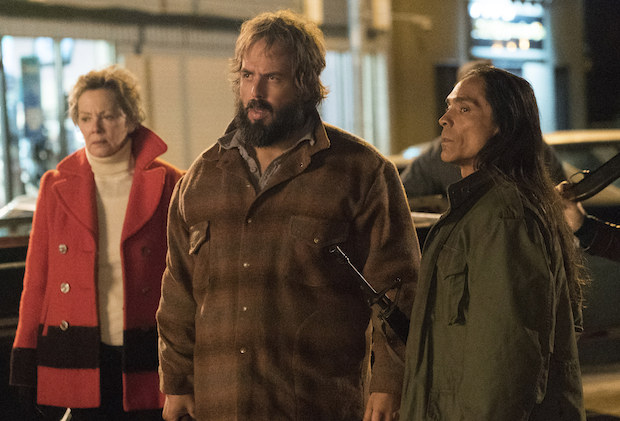 when he leads the small Gerhardt army to the Motor Motel to descend upon the rooms Kansas City is allegedly holed up in — when in truth, they’re mostly occupied by the Sioux Falls troopers, save for Sheriff Larsson in one room and Duluth PD’s Lt. Schmidt guarding Ed and Peggy in another.

No less than a massacre indeed ensues, with Bear and his men charging into room after room, gunning down anything that moves. Amazingly, Schmidt gets the drop on the guys entering his room, while Larsson winds up taking a bullet to the belly but at last count was alive and kicking.

During the fracas, just as onlooker Floyd realized that her men had been duped into murdering a bunch of cops, Hanzee turns to the family matriarch and gutted her with a blade. Bear catches sight of what has happened but just as he heads toward “The Indian,” Lou shows up to distract him with a bullet. Lou gets off a couple more shots, but Bear still comes charging at the trooper, pinning him down and poised to choke him to death… until they are all transfixed by the lights of a UFO hovering right above the motel. Peggy and Ed use the out-of-this-world distraction to slip away, unscathed, for the umpteenth time (and with Hanzee on their heels, for the umpteenth time), while Mike Milligan arrives to catch a glimpse of the bloodbath and do a prompt 180!

What did you think of “The Castle”? And what do you think — other than being used and abused by some Gerhardts — is specifically driving Hanzee?