The actress has been tapped for a recurring role on Supergirl as DC villainess Silver Banshee, CBS announced Friday. 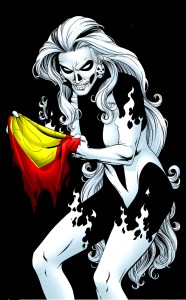 Ricci will make her debut in Episode 14 as Siobhan Smythe, Cat Grant’s latest hire at CatCo who quickly becomes a work nemesis for Kara — but that’s nothing compared to the havoc she’ll wreak as Silver Banshee. (Per DC lore, Silver Banshee can weaken and kill anyone within range of her incredibly destructive sonic screams.)

“We are so excited to be working with Italia,” executive producer Andrew Kreisberg said in a statement. “We’ve been a fan of her work for years and we cannot wait to see her take on this iconic comic book role.”

ETOnline was first to report the news of Ricci’s casting. Hit the comments with your reactions!