Stefan and Damon’s plot to kill Julian once and for all hit a snag or two on Thursday’s The Vampire Diaries, what with Lily’s beau charming her family of Heretics with chocolate chip pancakes and a party for Nora and Mary Louise’s anniversary. So, how to convince them that the vamp is a bastard? With the truth about the child he caused Valerie to miscarry, natch.

Getting Nora and Beau to adopt an anti-Julian mindset is easy, but Mary Louise – who always seemed to enjoy Julian’s brand of wicked fun more than Lily’s strict rule – isn’t as easily convinced by Valerie’s sad tale. It doesn’t help that just earlier that day, Julian offered her a gigantic diamond ring so she could propose to her 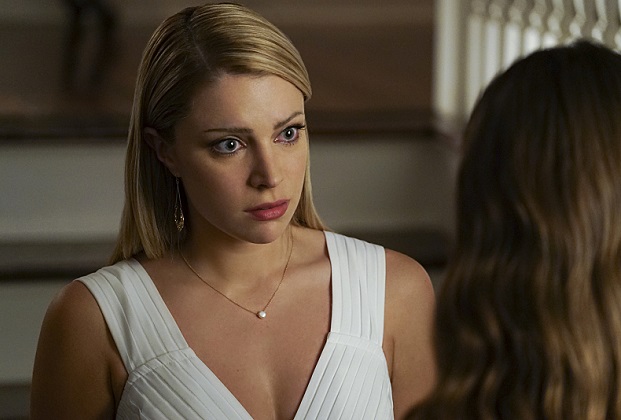 girlfriend. Nora, of course, accepted, but now that Mary Louise is slow to side with her family, Nora hands the ring back over. To her, it just represents how good Julian is at manipulating them.

After Mary Louise releases him from the Salvatores’ chains, Julian retaliates by tying up Damon and Valerie. “One lives, one dies,” he tells Lily. “You’re either a Salvatore, or you’re one of us. But you cannot be both.”

Actually, she can. Lily chooses to stake herself in the heart instead, not knowing that Julian has already unlinked the spell that binds them. Julian loses it, while Lily’s family takes turns saying goodbye as she lies on her deathbed. Damon, however, still doesn’t have it in him to forgive the first woman who ever broke his heart.

“You made your bed. Have a nice nap,” he snaps. (Nice to see him stand his ground, right?) So, with Lily in a state of decay, we have our first hint that it’s not really Mama Salvatore to whom a tied-up Damon apologizes in the flash forward. (Was it even a genuine, “I’m so sorry”?) And the mystery woman isn’t coming to his rescue either, delivering a kick instead.

Elsewhere in the episode, Caroline breaks the awkward news to Stefan that she’s magically pregnant with Alaric’s babies. Stefan’s reaction sums it up best: “I don’t think there are any words.” But after getting some advice from Lily, he manages to string a few together, reassuring Caroline that he’s “not going anywhere because I love you.” What a boyfriend!

Then there’s Matt, whose future I’m still very worried about. (Where is his flash forward?!) Enzo telling him, “You’ve brought a knife to a gun fight, and it’s going to be the death of you,” certainly didn’t ease my concerns. But at least Matty Blue Eyes is being proactive, making mysterious new friends who can help him protect Mystic Falls. In fact, said well-equipped pals take down Enzo with a dart. (Team Arrow, is that you?)

Vampire Diaries fans, what did you think of the episode? Are you sad to see Lily go? Got any theories on the mysterious huntress?