Once Upon a Time‘s newly minted Dark One is on a mission — and he’s enlisted a boatload of shady friends to help him.

Infused with the Darkness against his will, as the result of Emma’s desperate bid to save his life, Captain Hook is none too happy, save for relishing the savory prospect of using his new powers to avenge long-ago love Milah once and for all, by vanquishing Rumplestiltskin. To that end, after having lost Round 2 to the “Crocodile,” Hook tapped into a Storybrooke portal allowing access to the Underworld, whence came Nimue and alllll the Dark Ones in between.

With Season 5’s fall finale unfurling this Sunday (ABC, 8/7c), TVLine spoke with Colin O’Donoghue about Hook’s walk on this very dark side, his plan to destroy the world and the “good thing” about playing a polarizing pirate.

TVLINE | How far in advance of the Dark Hook reveal did you learn it was coming?
It was probably two or three weeks, if I recall, when [series creators] Eddy [Kitsis] and Adam [Horowitz] said, “This is what’s going to happen….” I was delighted to be able to explore that side of Hook again, as a dark, villainous character — only this time he’s amplified by a thousand, you know?

TVLINE | What went into developing the Dark Hook persona? Did you bounce any ideas off of Jen [Morrison], who’s been doing things a bit differently as Dark Emma?
I obviously spoke to Eddy and Adam about how they saw Dark Hook being. They were like, “We want him to be like the older Hook,” who had already embraced darkness — not the Darkness, but darkness — so I took that and ran with it and wanted him to basically be maniacal. He’s sort of an unstoppable force who has no empathy or feeling for anybody except himself. That was the starting point, and then playing off that you sort of have fun and enjoy it.

TVLINE | I was going to say, 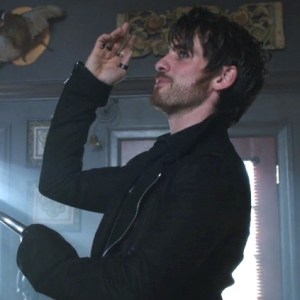 it definitely looks like you’re having a ball, especially in that scene with Bobby Carlyle — “Get your affairs in order, Dearie!”
I read that line and I thought that’s actually one of the first things Rumple as the Dark One says to Hook — “Get your affairs in order,” or something. But whatever way he delivered it, I thought it would be a fantastic way of jabbing a non-Dark One Rumplestiltskin, by pretending to be him. And it was fun, it was fun.

TVLINE | I know this was touched on on the show, but why in your mind is Dark Hook different from Dark Emma?
Dark Hook is different because he’d already tasted darkness, he’d already given in to a part of it, whereas Emma was coming from the place of being the Savior and essentially always saving the day. That’s why she as a Dark One — and I’m not wanting to speak for Jen — comes from a place of struggling against the Darkness, at the start.

TVLINE | Emma’s trying to keep her ish together whereas Hook is more susceptible.
Yes, yes. You saw that when she had Rumple in her head in Camelot — she really was trying to fight it, whereas Hook tried to fight it for all of two seconds until [Rumple’s apparition] says, “I can help you get your revenge on me.” And because Hook has already lived with that for hundreds of years, the Darkness had him. Hook says that just before Emma turns him into the Dark One: “Let me die. I don’t have the willpower to fight this and I don’t want to become the one thing that I hate.”

Watch a sneek peek from Once Upon a Time‘s midseason finale:

TVLINE | Is there any talking sense into him? Will Emma continue to try?
It’s difficult. Because he has embraced the Darkness — not intentionally but because that’s who he is now — he has one overriding mission and that is to kill Rumplestiltskin, and he is willing to let the Darkness use him as a pawn and bring back all the other Dark Ones to do that, if it means he can send Rumple to the Underworld — and whoever else he’s willing to sacrifice. Much in the way that the Rumple character, when he was the Dark One, was willing to sacrifice all the people he loved to get whatever he wanted for himself.

TVLINE | To be clear: Hook’s end game is to get revenge on Rumple one way or another, be it death or banishment to the Underworld. But the Dark Ones that just arrived on the boat, their end game is to “snuff out the light”?
That’s part of Hook’s end game too, because he is the Darkness, they all exist as one in whoever is the conduit. When we see Nimue talking to Merlin in the last episode, she appears to Merlin but she’s still a part of Hook. Now, bringing [the Dark Ones] back from the Underworld, they exist as separate entities but their overriding mission is to snuff out the light. Hook is willing to do that as well — and if he gets his revenge, that’s an added bonus!

TVLINE | So, we’re getting some flashbacks in Sunday’s midseason finale?
We are. You get to see a bit of Hook’s relationship with his father (played by EastEnders‘ Adam Croasdell), which I was really excited to explore. That time was a huge part of what made Killian Jones become who he was.

TVLINE | Those flashbacks are with a kid, though, right? Not you?
There is some with a kid (played by Salem‘s Oliver Bell), but you also get to see a little bit of older Killian Jones, played by me, interacting with “Papa Hook,” as the fans are calling him. 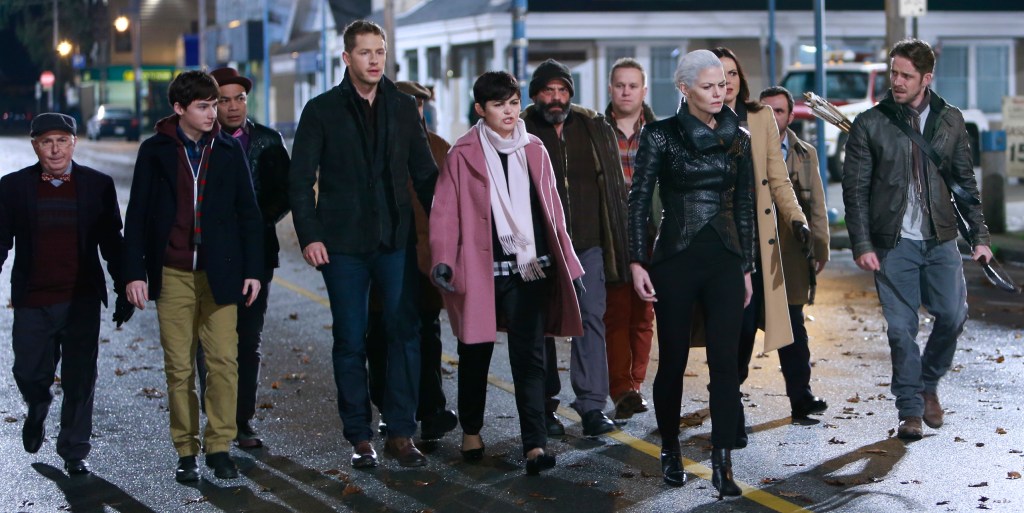 TVLINE | Besides Emma and Rumple, is Dark Hook going to get in anyone’s else’s face? Does he have words with Emma’s father David, perhaps..?
I mean, he kind of gets in everybody’s face a little bit! [Laughs] Eventually he’s trying to destroy the world, so….

TVLINE | Is it safe to say things will get worse for him and Emma before they get any better?
You’ll have to wait and see. You might get an answer to that on Sunday.

TVLINE | We just took stock of TV’s Most Polarizing Characters and Hook is on the list, stirring emotions as he does one way or the other — which I’m sure is not news to you. How does it feel to play someone people either love or… don’t really like much at all?
I understand that and you know what? It’s brilliant, it’s a great thing, because that means you’re doing your job well. Especially for this character, because Hook has done some really heinous things in his past. Even when I came on the show in Season 2, he was not that nice a guy, so I actually expected everybody to dislike Hook. But weirdly, a lot of people really like that in a person for some reason. [Laughs] It’s an interesting thing because I always knew he would be that person who would polarize people, and I guess that’s a good thing for me as an actor. But if I was speaking as Hook, I’d be a bit annoyed, like, “Why doesn’t everyone like me!”