Supernatural has crafted a universe where fairies attack and Dorothy of Oz exists, but this may be the show’s wackiest scenario yet: Sam’s childhood imaginary friend isn’t all that imaginary — and he needs the Winchesters’ help!

In tonight’s episode (The CW, 9/8c), the aforementioned pal, Sully (played by Mr. Sunshine‘s Nate Torrence), seeks out Sam and Dean when things get bloody in his world. Off screen, there was a returning friend involved in the action as well: the installment marks the TV directorial debut of actor Richard Speight, Jr., who recurs as the angel Gabriel/The Trickster on the hit series.

In what should be a treat for longtime fans, the hour promises to deliver some significant insights into Sammy’s upbringing, like “why Sully mattered to him [and] why Sam needed an imaginary friend” at the time, Speight, Jr. previews, adding that viewers will discover “what was going on in the family dynamic that was making a young boy lean away from existing family.”

In the episode’s flashbacks, Sam — portrayed for the first time by Dylan Kingwell (The Returned) — is “struggling to find his own identity as a little boy,” Speight, Jr. continues. “There’s something very sweet and telling about it. It speaks a lot to who Sam is now, the choices that he now makes and has made in the past.”

Although there’s a lot of “gravitas” to Sully’s return and “really grounded, legitimate heartfelt moments” between the old buds, the hour is also filled with plenty of levity befitting the unusual premise.

“It’s got a lot of the fun, quirky, untraditional comedic elements that Supernatural sometimes gets into,” Speight, Jr. says. “We definitely have some fun characters coming back and bringing a different kind of quirky energy to the show.” 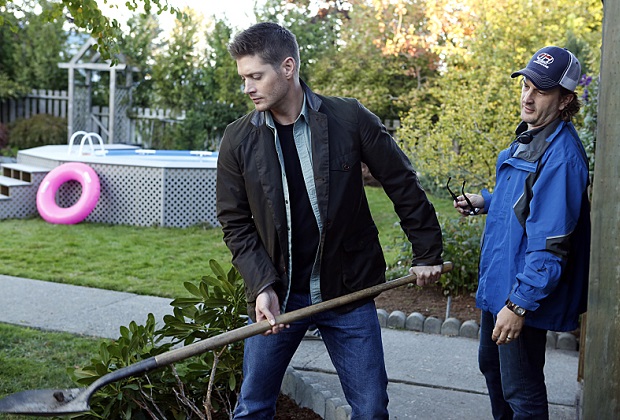 But the action behind the camera was all business. Believe it or not, stars and notorious jokesters Jensen Ackles and Jared Padalecki did not pull any pranks on Speight, Jr. (Someone got lucky, unlike co-star Misha Collins when he first directed!)

“There was a moment where Jared looked at me and said, ‘I really feel like I should be screwing with you because so many people have asked me to,'” Speight, Jr. shares. “And I recall saying something like, ‘Let’s disappoint them, shall we?'”

As for whether Speight, Jr. – who honed his craft by helming the short film America 101 as well as enrolling in the Warner Bros. Television Directors’ Workshop – will ever grace the CW drama again on screen, “That’s the question, isn’t it?” the actor replies. “The people who watch the show religiously know that Gabriel’s back. When he reappeared to Castiel [in Season 9’s ‘Meta Fiction’], he made that clear. So he’s somewhere, doing something, watching this whole Darkness thing play out. And I, like everybody else, look forward to seeing how and when he decides…what he’s going to do about it.”