Warning: The following contains spoilers for Wednesday’s episode of Arrow.

The paternity results are in on Arrow, and Oliver Queen, you are the father.

During the conclusion of the superhero series’ crossover with The Flash on Wednesday night, Oliver confronted his former fling after running a DNA test to confirm that her kid is, indeed, his child.

But the mother-son duo aren’t Sandra and Connor Hawke — as some fans have speculated since the baby mama’s first appearance in Season 2. Instead, the show’s producers chose to have them simply be Samantha and William Clayton, instead of iconic comic book figures.

Executive producer Andrew Kreisberg says the creative team didn’t want to be restricted by “a character like Connor not being able to be part of the show [because] we made him so young.” The eventual compromise, he adds, allows for “the leeway to still have Connor Hawke be part of the universe.” 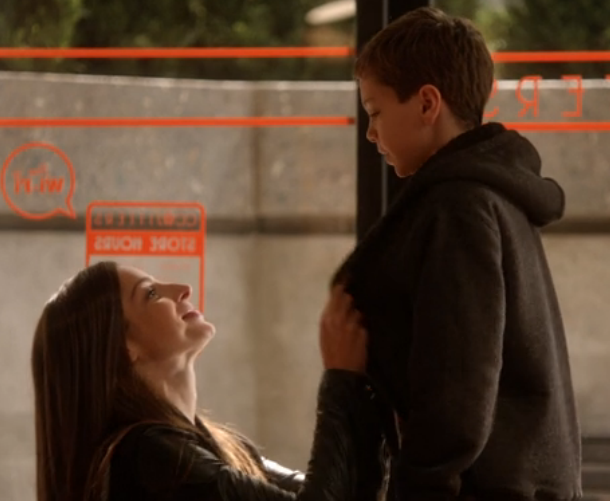 “That was the biggest reason we made that decision,” the EP continues. “It’s actually one of the things all of us are most proud of… that we were able to, basically, have one scene in one episode in Season 2, knowing that we were eventually going to get to this point, and that it is all set up and all tied in to Oliver’s mother. [Her portrayer] Susanna [Thompson] hasn’t been with the show for a while now, and yet her presence is still felt all throughout this story. There are some things that happen when you do a show for a long time that are just happy accidents, and then there are other things that you plan. This is one that we really planned.”

Adds EP Greg Berlanti: “It’s, obviously, a very emotional storyline. It was nice to pay off, especially watching Stephen [Amell] do a lot of the work that he did in the episode.”

Read on for scoop on the challenges ahead for Oliver and Felicity, the aftermath of Barry’s time trip and more.

OLICITY’S BUMPY ROAD | Oliver’s decision to keep the truth from Felicity about his son — that is, after Barry erased the timeline where she found out on her own, resulting in a huge fight with her boyfriend — is “definitely going to come to a head in the middle of the season,” Arrow co-showrunner Wendy Mericle previews. “True to what we’ve done on the show, if there’s a secret somewhere, it’s going to come out, and it’s going to have some serious consequences. We’re excited about how that’s going to change things.” After a run of mostly smooth sailing this season for the couple, the covert curveball is “really going to raise the stakes and throw some wrenches into the works of their relationship,” the EP continues. “We’re going to mine that. There’ll be some fallout for both of them.” 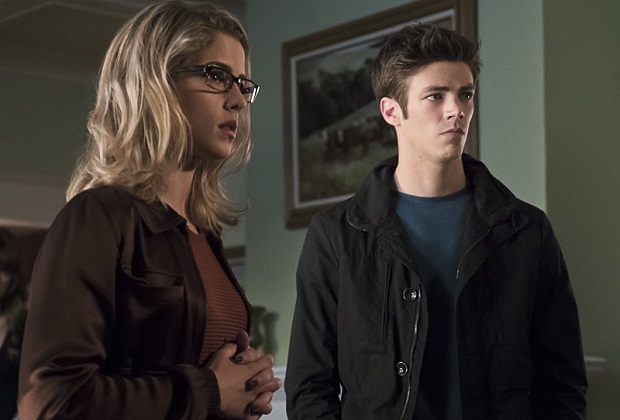 TINKERING WITH TIME | Barry’s trip back in time after Savage destroyed Central City, killing both Teams Arrow and Flash (!), will have consequences, per the EPs. “When Sara was brought back, when Thea was brought back, last year when Barry changed the timeline, this year when Barry changes the timeline, any of these things that feel like the right thing to do, there is always, always a price to be paid,” Kreisberg warns. And relying on magical or fantastical fix-its to undo death won’t necessarily be possible in the future. “We’ve certainly taken care of the Lazarus Pit at the end of Episode 3 of [Arrow] Season 4,” EP Marc Gugggenheim says, adding that spinoff DC’s Legends of Tomorrow will explain “why time travel can’t be used in a deus ex machina kind of way, not just with respect to death, but with respect to any plot contrivance.”

VANDAL’S RESURRECTION | As seen in the closing minutes — when Malcolm gathered Vandal Savage’s ashes — the villain’s story is far from over. But the details of how he’ll resurface to haunt Legends will be saved for the offshoot rather than upcoming episodes of Arrow or The Flash. However, Berlanti notes that the current seasons of those mothership shows are far from done, “so I don’t want to say we won’t come up with some kind of way to reference it.”

What did you think of Part 2 of the Flash/Arrow crossover? Grade it via the poll below, then hit the comments to back up your pick!