If you like to go into each episode of American Horror Story: Hotel as clueless as poor John, you’ll want to avert your eyes from this article faster than you would from the Addiction Demon.

But if you’d prefer to have a few clues dropped before settling in on the edge of your seat to watch “The Ten Commandments Killer” (tonight at 10/9c on FX), read on. We’ve seen the pivotal episode and can tell you that…

1. Yes, we do indeed learn the identity of the serial killer that John’s been chasing all season. And though many of you have already guessed whodunit, the big reveal is played with such intensity that it’s still pretty damned satisfying. (Emphasis, obviously, on the “damned.”)

2. Perhaps even more shocking than who the murderer is, is what the murderer does next: run to the authorities and confess!

3. A flashback reveals that The Countess’ abduction of Holden was motivated by more than merely her predilection for towheads.

4. Further flashbacks — there are a lot of ’em — show us not only the beginning of a wholly unhealthy love affair between two of our main characters, but also the start of one of the odder bromances on record. (And for this show, that’s saying something!) 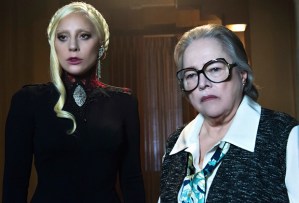 6. Given the way that “Flicker” ended, it probably won’t come as much of a surprise that the hour starts with a dead body.

7. And given that this is American Horror Story, not Modern Family, it probably also won’t come as much of a surprise that the hour concludes with yet another dead body. (Hint: The vic is a character who’s been with us all season.)

8. The Ten Commandments Killer isn’t done yet! We are left with a promise of two more murders. (“Yay” seems like the wrong response to this news. And yet… )

9. In a scene that seems too brief, considering the significance of its subject, March reminds Sally of the bargain they struck to save her from a fate worse than death. (Sadly, no mention is made of ever saving her from the crimping iron.)

10. Finally, in what may be the greatest suspension of disbelief that the series has ever asked of us, one of our regulars turns down what is thought to be a proposition from Donovan. Yes, Donovan, as in the Donovan played by the flawless Matt Bomer — that Donovan. Crazy, right?

So, who do you think the Ten Commandments Killer is? And who do you predict will be the stiff of the week? Hit the comments with your best guesses.