Although this week’s American Horror Story: Hotel at last revealed to John — and us — the identity of the Ten Commandments Killer, cracking the case hardly put the unhinged detective in the mood to celebrate. How come? Read on, and I’ll explain…

BE CAREFUL WHAT YOU WISH FOR | Understandably upset in the wake of Wren’s demise, John made a beeline for the Cortez and demanded that Liz take him to the TCK’s hiding place. “I’ll take him there,” Sally said, then led the detective to Room 64 — the very room in which March died. Behind the armoire, John discovered a 10-case display of souvenirs from murders old and recent. How could that be? “No serial killer has a 90-year lull,” he noted. All that time, Sally explained, March had been looking for a successor. And guess what: “It’s you, John. It’s always been you.”

TOTAL RECALL | Utterly wrecked by all of the gory details that he suddenly remembered, John confessed to Hahn, starting with five years ago — the first time that he actually set foot in the Cortez. He’d only been looking for a drink. Instead, Donovan had ushered him upstairs to meet March, who was so impressed by the cop’s “calm indifference” to death that he kept him there, swilling absinthe and discussing his moral outrage for two days. Finally, March had found a worthy successor… if only John lacked the hope that kept him from going over the edge. His solution? Have The Countess kidnap Holden. That oughta do it. (And, as we know, did do it.) 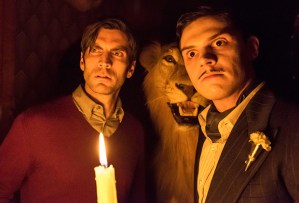 AS TEARS GO BY | Following Holden’s abduction, “five years went by like it was yesterday,” John said. And during those five years, the only place that he felt any peace was the Cortez. (Hey, misery does love company.) In time, March showed his protégé to his trophy room and suggested that John free himself of the laws of man and embrace justice. Taking the bait, John murdered pedophile Gamboa with the Oscar that the creep was selling. Afterward, John hanged himself and would have perished, had March not intervened. WTH was Sally doing, just sitting there? the hotelier wanted to know. Furious, he reminded her of their “little arrangement” through which she was protected from the Addiction Demon only so long as it was provided with a steady supply of others on which to feed.

HOW ‘LOWE’ CAN YOU GO? | Before long, John was engaged in a torrid affair with Sally (whom he couldn’t ever remember once he was outside the hotel); picking up March’s Bible-based hobby; and covering his tracks by making sure that he became the lead detective on the TCK case. However, his recklessness was an issue. For instance, upon learning that a worried Alex had had coffee with Hahn to discuss her husband’s erraticism, John wanted to off them immediately. And he probably would have done it, too, if Sally hadn’t suggested a pair of adulterers that he didn’t know as less obvious victims. (Behind every great homicidal maniac, there’s a… ghost junkie?)

ONE DOWN, TWO TO GO | As the hour drew to a close, John killed Hahn for coveting his wife, then returned to the Cortez — for the first time remembering Sally, Iris and its whole cast of crazies. Leave, Iris suggested. You can go, so go — walk away! Rather than follow that sensible advice, John added an eighth item — um, was that Hahn’s johnson? — to his and March’s collection of murder souvenirs. Pleased as punch, March told John that “death is your art” and asked, “What will you do with your talent?” Commit two more murders, John replied. Because really, what else could the answer have been?

So, did you predict that John was the TCK all along? Who do you think his next victims will be? Hit the comments!