This, in a nutshell, is what makes Lisa Edelstein one of my favorite interview subjects. Mere seconds into our discussion about Season 2 of her Bravo rom-com Girlfriends’ Guide to Divorce (premiering tonight at 10/9c on Bravo), the former House MVP hands me a beautifully gift-wrapped spoiler about Episode 4, airing Dec. 22.

The installment, written by co-star Paul Adelstein, is “a standalone hour about Abby and Jake,” she tells me. “They send the kids away, stay at home for the weekend and just explore what their relationship is. It’s so good. To me, it’s what this show is about — two people whose relationship ended but still love each other but can’t be together. It’s heartbreaking.”

Edelstein’s unprompted scoop set the tone for a spirited Q&A about not only Abby’s looming existential crisis, but also her then-controversial departure from House and her secret crush on Buffy the Vampire Slayer and its fearless leader Joss Whedon.

TVLINE | It’s clear Jake and Abby belong together, but if that happens it sort of nullifies the premise of the show. Is it tricky to keep that tension alive in a way that feels real?
Not really, because it’s that tension that makes the show interesting. When you divorce and you have children, your divorce is never over. You always have to find a way to move through life together, because you have to co-parent. And, eventually, people try to keep their boundaries really strong, but Abby and Jake have definitely not figured that out.

TVLINE | How much of this season is about that relationship?
Jake goes off to Latvia to shoot that independent film for a while this season, so it’s not all about Jake and Abby. And then what Abby is left with is herself. Without divorce to point at, she’s left with the real problem, which is, “Who is she and what the hell is she doing with her life?”

TVLINE | How is Abby going to react to the news that Becca is pregnant with Jake’s child?
It’s complicated. It’s not just that she’s pregnant, it’s that he hasn’t told her. They’re both keeping secrets from each other.

TVLINE | Speaking of which, does Abby love Will?
Abby loves Will, but she needs to fight for her family if she has the chance. One is a new love and one is an old love with children. And while the new love is exciting and sexy and intoxicating, this other love is historical and there’s a family structure. 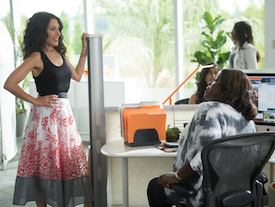 TVLINE | The new character played by [Parks and Recreation alum] Retta represents a grittier, arguably more realistic perspective of the modern-day divorcee. Was that the show’s way of saying, “Yes, we know Abby has ‘white people problems…'”
I think so. [Series creator] Marti [Noxon] recognized that some people were like, “Well, that’s not what my divorce looks like.” And she wanted people to know that she knew that. Divorce looks like a lot of different things. Sure this is an aspirational show, but we also wanted to make sure that another story was being told, about people who don’t have a wealthy divorce and are not having as good a time and really struggling. What’s nice about Retta’s character is it [forces] Abby to have to defend an idea that she really isn’t living. She is the pretty face of divorce, but her life is in shambles. And it only gets worse. Abby goes down the rabbit hole in Season 2.

TVLINE | Tell me more about this rabbit hole…
I’m exhausted. [Laughs] I never quite worked that hard. She’s dealing with a lot. Again, it’s about dishonesty. It’s about when the outsides and the insides don’t match. Abby is so good at faking it that she’s destroying herself.

TVLINE | You’re exhausted but I get the sense that you love this job…
It’s such a special experience. I’m so grateful to be old enough to know how special this experience is, because a lot of nice things can happen in your 20s, but you just don’t know that they’re incredible. You just think it’s what life looks like. It’s great to have had a long slow build in my career, and I think Paul feels the same way. 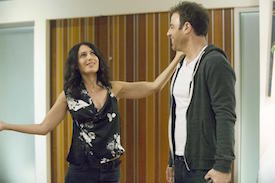 TVLINE | What is your working relationship like with Paul?
It’s so easy. From the minute we started we had such a nice, weirdly historical chemistry together, maybe because we’re both Jewish and we’re probably related 10 generations ago. [Laughs] Our ancestors are probably rolling in their graves every time we kiss. They’re like, “Noooo! Incest! Too many shared genes!”

TVLINE | Marti’s former Buffy boss Joss Whdeon makes a cameo in [tonight’s] premiere. Are you a Buffy fan?
Yes. I initially checked it out thinking, “Oh, this dumb show…” And then I was hooked. That episode where her mom dies remains one of my favorite TV episodes ever.

TVLINE | Was it hard not to geek out while shooting your scene with him?
I met him before, but I don’t know if he knows what a [big] fan I am of his. [Laughs]

TVLINE | Requisite House question: How do you look back on that whole experience?
It was a great experience. To be on a show that was such a big hit… it changed my life. It ended sadly, but the ending does not change the whole experience.

TVLINE | Is any part of you bummed that House and Cuddy didn’t ride off into the sunset together?
I don’t think that show was about happy endings. And the truth is, if someone drives a car through your living room you should do what I did and get the f–k out of town. [Laughs] I mean come on. It kind of all worked out. Let’s tell it like it is. He drove a f–king car through her living room. With the baby and family inside. That’s crazy. You file a police report and you leave — and you don’t come back for the f–king [series] finale. [Laughs]