Has Fox’s Gotham given a face to the historically elusive killer of Bruce Wayne’s parents?

Loosely based on a DC Comics character of the same name, Malone is described as “a weathered, philosophical hitman who may be the triggerman behind one of the most important crimes in Gotham’s history.”

The operative words there may be “may be.” In the Nov. 23 episode, Silver St. Cloud was tricked into revealing that “M. Malone” murdered Thomas and Martha Wayne (in the series pilot), a piece of information that her uncle Theo Galavan had dangled in front of young Bruce. Then again, “M. Malone” could turn out to be the onetime headwriter of One Life to Live.

In other Gotham casting 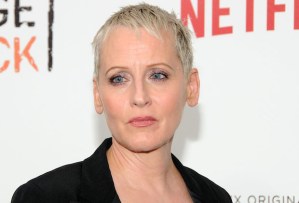 news, Variety reports that Tank Girl-turned-Orange Is the New Black inmate Lori Petty will guest-star in Episode 14 (the third one after hiatus) as a nightclub owner who offers Bruce clues to finding the mysterious “M. Malone.”