Hey, Voice fans, it’s time to put some words in our coaches’ mouths, Mad Libs-style: “I don’t want to sound [adjective] but [contestant name] that was honestly the [adjective] [noun] you’ve delivered all season. I really hope the people at home [verb] after what you just did.”

Do your worst! Make Adam declare that Braiden Sunshine delivered to us a mouth-watering PBJ. Have Gwen huff that Jordan Smith coughed up the gnarliest of hairballs. You can even prompt Pharrell to bash my runaway favorite Jeffery Austin’s next-level performance (that somehow got relegated to the voting wasteland of the week’s kickoff performance slot) (bearing in mind I’ll fly into a fit of #HulkSmash if he winds up in the Bottom 2). 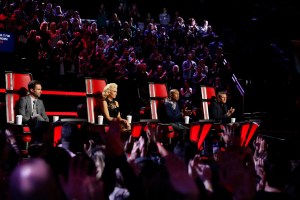 Whatever the result of this exercise, at least it’ll break up the utter monotony of hearing the Season 9 coaches tell bald-faced lie after bald-faced lie, falling into the sickening “everyone gets a gold star!” quagmire that ultimately punishes over-achievers by pretending they’re no better than those who are dragging down the overall GPA of the Season 9 class.

I know, I know… I’ve been begging for more forthright critique from every Voice coach (except maybe Xtina) since Season 1, but tonight Blake, Adam, Pharrell and Gwen took their “50 shades of bland praise” to maddening heights. Why not spend their camera time reading their grocery lists or weighing in on the accuracy of tabloid rumors or shamelessly promoting current iTunes releases from their former contestants? Hmph!

But enough kvetching from your humble recapper: Let’s cut to my letter grades for this week’s performances: 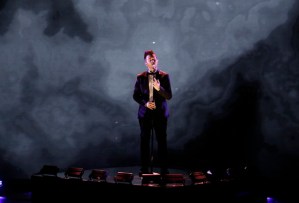 Team Gwen: Jeffery Austin, “Jealous” — Grade: A | For once, I’m not going to wax poetic about Jeffery’s pitch perfection, the rumblingly gorgeous huskiness in his lower register or the ache that infuses his glory notes. This week, I’ll just praise the way he inhabits a lyric, makes us believe beyond the shadow of a doubt that he yearns so deeply for a lost love that he truly does feel envious of the wind that rustles through his clothes. Blake’s side not that he hadn’t been as wrapped up in a performance all season as he was in Jeffery’s “Jealous” will hopefully be enough to counterbalance the dreaded kickoff position – because a Top 4 without the season’s best vocalist would be a kind of Kimberly Nichole-in-sixth-place injustice that simply can’t repeat itself. 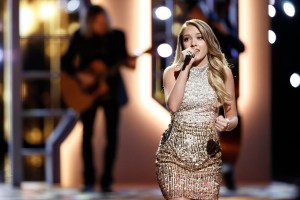 Team Blake: Emily Ann Roberts, “She’s Got You” — Grade: B | Emily struggled a little in the opening third of her performance, her nerves percolating through her “sunshine bearing down on a wheat field” tone and the overwrought string section occasionally threatening to overpower her. And while the Teenager Most Likely To Displace Cassidee Pope, RaeLynn and Danielle Bradbery on the Country Charts didn’t benefit from choosing the most repetitive jam in the Patsy Cline songbook, there were enough soaring moments in the final 45 seconds to guarantee her safe passage into the Top 9. 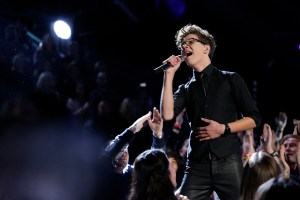 Team Gwen: Braiden Sunshine, “Radioactive” — Grade: D | Blerg. Urgh. Argh. Didn’t Gwen realize during Braiden’s “Renegade” two weeks ago that we’d rather watch him whip/nae nae than ever again bear witness to the gawky teenager attempting to play the role of rock star? Bad enough that the verse was flatter than a penny left for two weeks on an Amtrak rail, but Braiden’s “Golly, mom, I’m on TV!” demeanor flew in direct opposition to the post-apocalyptic vibe of the lyrics. Honestly, Blake covering “Uptown Funk” would’ve been less incongruous. 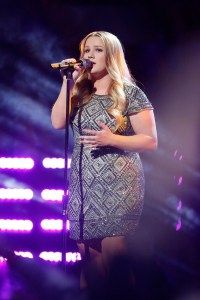 Team Adam: Shelby Brown, “Go Rest High on That Mountain” — Grade: C+ | I’ve been rooting for Shelby right from the first gorgeous glory note she hit during her Blind Audition performance of “Stars.” And while I’ll admit I’ve made more than a few excuses with her subsequent struggle to control her pitch during non-belty moments and to stay in time with the mighty Voice band, this was the week where I made peace with the fact that the Alabama teen is probably still two or three years away from being ready for the big show. I don’t know how it’s possible to be ahead of the band and still come across as lethargic, but that’s exactly how I’d describe Shelby’s first visit to the intersection of religious and country. There’s still a sense she’s skimming over her lyrics — like she’s back in an Alabama bowling alley on karaoke night — rather than digging deeper into the lyrics and elevating the music in the process. 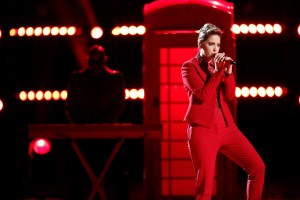 Team Gwen: Korin Bukowski, “Same Old Love” — Grade: B- | Slow clap for Korin – who, at least from a technical standpoint, gave a vastly improved vocal compared to her prior live performances. There were no cringe-inducing ad-libs or tentative lower-register hiccups, and yet it has to be asked: Why the heck was the fabulous alt-rock-nerd-chick doing tackling Selena Gomez’s collapsing soufflé of a current radio hit? Korin’s stiff body language telegraphed her inability to personalize a ditty with all the nuance of a Real Housewives reunion special. 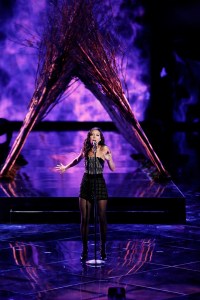 Team Adam: Amy Vachal, “Bye Bye Bye” — Grade: C+ | Adam was absolutely right when he said he and Amy have mastered “the ability to maximize creative capacity” in terms of tweaking cover-song arrangements to fit her gauzy tone. Trouble is, when you removed the intriguing changes in tempo and instrumentation to Amy’s N’Sync cover, you were left with an almost monotone verse — and a lyrical reading that tended more toward vacant than haunting or bitter or any of the other intentions discussed in Amy’s pre-performance package. Throw in a second verse peppered with wonky notes, and I’m wondering if the iTunes sensation might be flirting with naked emperor territory. 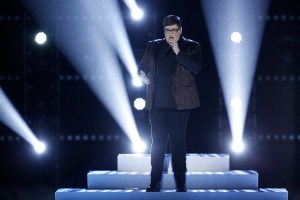 Team Adam: Jordan Smith, “Hallelujah” — Grade: B | As per usual, Jordan effortlessly nailed every note of his song — with an admirable commitment to restraint that’s not always utilized by reality-show competitors tackling Leonard Cohen’s done-to-death anthem. And yet despite all the A+ production values — the formation of spotlights, the rolling fog, the full Gospel chorus on backup, there wasn’t any real sense of romantic or sexual yearning in Jordan’s delivery. Granted, the lyrics of “Hallelujah” are certainly open to interpretation — aka inscrutable — but they’re not merely pretty or safe or void of any danger… all adjectives that describe Jordan’s peculiar approach to the tune. 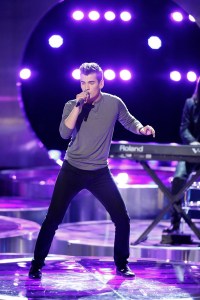 Team Blake: Zach Seabaugh, “Crazy Little Thing Called Love” — Grade: B+ | Zach is certainly not the best singer in Season 9 — in fact, he’s almost definitely in the bottom half of the remaining pack. But whether or not you’re purchasing his Queen cover on iTunes, there’s no denying he sold the maniacal lustiness associated with a guy getting hot and cold fever, then being left in a cool, cool sweat. Honestly, all the vocal horsepower in all the world doesn’t mean a damn thing if there’s not actual intent behind it. So while some of Zach’s notes got swallowed whole like piranhas gobbling up guppys, Blake probably got a point that the kid is a genuine threat to make the finale. 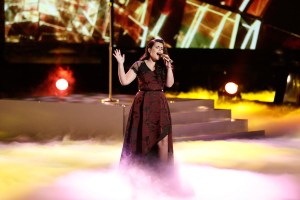 Team Pharrell: Madi Davis, “Girls Just Want to Have Fun” — Grade: B+ | I’d love to get an isolated feed of Madi’s mic — without the very fussy sax and drums and strings that I think may have affected my enjoyment of her borderline mournful “Girls Just Want to Have Fun.” Because while I’m not especially eager for a repeat listen, there’s no arguing against her elegant tone and phrasing, or the surprising lilts and belts she brings to a melody. If she can continue to showcase those assets — and assert her creativity in the rehearsal room — Madi might be proof positive for the besieged Team Pharrell that it only takes one contestant to get you to the finals. 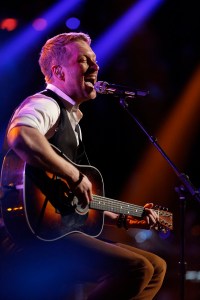 Team Blake: Barrett Baber, “I’d Just Love to Lay You Down” — Grade: A | Normally, Barrett comes on like melted cheese pouring down over an entree at Chili’s — wayyyyy too thick and goopy and overbearing. But the country crooner brought a grown sexiness to the stage this week that proved a refreshing changeup from the often chaste Voice proceedings. The goofy grin that crossed his face on “the little things that turn me on,” the crack of emotion that accompanied the final verse about how his attraction for his wife will live on after they’re old and gray, these are the types of professional-level moments that make ka-ching sounds go off in the minds of label execs. Bonus points for some bold, on-point riffs on the final chorus… ones that may have finally put him ahead of Zach in the pecking order for the seemingly unstoppable Team Blake.

What did you think of the Top 10? Who were your faves? Who’s in trouble? Take our poll below, then sound off in the comments! 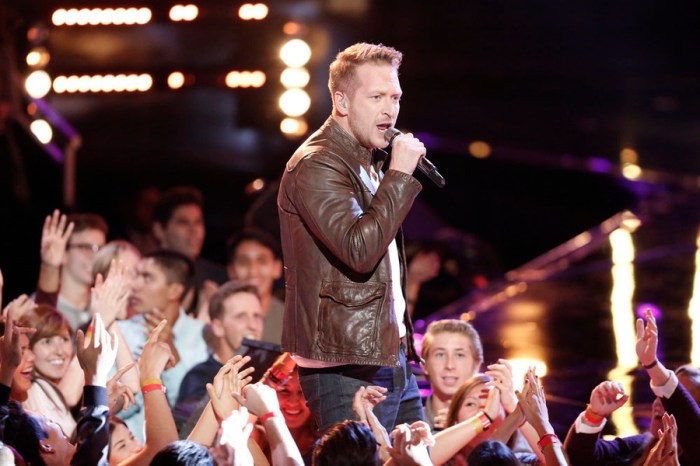