Sure, Kara Danvers might be able to cook meat with her eyes, punch through the roof of a car without blinking and freeze anything in her path just by breathing on it — but she’s still just your average feminist.

In Monday’s installment of Supergirl, Kara was forced to learn a tough lesson — that getting angry in public isn’t so easy when you’re a woman — while simultaneously facing down the newest threat to National City. Let’s recap the details of “Red-Faced.’

MAD KARA: FURY ROAD | As is now tradition on the CBS drama, Supergirl kicks off the episode facing scrutiny from the public — this time for breaking the wrist of a civilian and freaking out a bunch of grade-school kids with her temper. It seems at first that our heroine might just need some anger-management therapy, but her uncontrollable rage soon starts to put others in danger. When Kara is asked by General Sam Lane — yep, Lucy Lane’s father — to fight the Red Tornardo, an anti-insurgent combat device that the Army has been developing, Kara gives the robot a full-blown beat-down just by channeling her anger. She breaks off one of the Red Tornado’s arms and damages his technology, which seems swell at first… until the Red Tornardo, feeling threatened by Supergirl, goes into stealth mode so that no one in National City can track him or the havoc he’s about to wreak. Oops.

In the meantime, while Supergirl and the DEO wait for the Red Tornado to reappear, Kara struggles to keep her temper under control at work. She lashes out at Cat for talking down to her — “Why are you so mean?” she screams, pulling a page from Taylor Swift’s book — and Cat, to everyone’s surprise, takes Kara out for a drink instead of firing her on the spot. While knocking back many a martini, Cat explains to Kara that it’s impossible for women to get angry in the workplace (whereas men can do so without anyone batting an eye), so Kara must learn to channel her anger elsewhere. 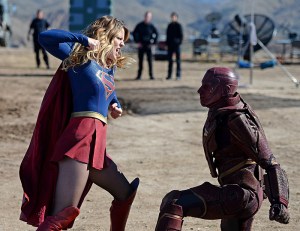 Later that day, Kara takes out her frustration by punching a car until its mechanical insides fall out, realizing as she does so that the real source of her anger is the fact that she’ll never lead the normal life she so desperately wants. And once she has this epiphany, she assures Hank and Alex that she’s not scared of her rage anymore; instead, she’ll use it to defeat the Red Tornado, who has since popped up on the streets of National City again. With a little help from Maxwell Lord (with whom a steamy hook-up is inevitable), Alex learns that the Red Tornado’s creator, Dr. Morrow, is controlling the robot’s actions, and the only way to take out the android is to destroy the guy who made it.

In the final act of the hour, Supergirl and Alex team up to defeat the Red Tornado: While Supergirl beats up the ‘droid, Alex puts a fatal bullet into Morrow, which should end the whole ordeal once and for all — except of course it doesn’t. The Red Tornado comes alive all on its own, and the only way for Supergirl to get the upper hand is to channel that pesky fury she’s been keeping inside. As she taps into how mad she is for being sent to Earth all those years ago, Supergirl kicks her laser vision into overdrive, sizzling the Red Tornado’s technology so intensely that she actually collapses once her enemy goes down for the count. And it seems Supergirl’s super-rage may have had one majorly negative effect: When Kara cuts herself on a piece of broken glass the next day, she strangely starts bleeding — meaning she might have become human?

While that worrying news sinks in, here are other highlights from the hour:

* Just as we were all coming around to Lucy Lane’s presence in National City, it’s revealed that she works for her father — and she doesn’t like Supergirl at all. “I wasn’t impressed,” Lucy tells James (and poor Kara!) after her first meeting with the caped heroine, adding, “It’s like when you meet a movie star and you think, ‘Is that it?'” Fortunately, Lucy comes around after Supergirl saves her from death by Red Tornado (and ultimately resigns from working under her dad) — but now we know Lucy can be cold. 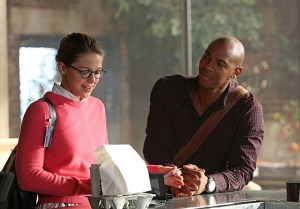 * Speaking of the Lane family, our first impression of General Lane is that he’s probably never smiled once in his whole life. Not only does the general have zero regard for Supergirl’s well-being — it’s later revealed that the Red Tornado’s real purpose was to destroy Kryptonians, not fight insurgents as the DEO was originally told — but he flat-out tells James that he isn’t good enough for Lucy, calling James “a glorified paparazzo.” Lucy stands up to her father in the end, assuring General Lane that she and James are on the same team, but he won’t have it. “I hope that one day, when you realize what a terrible mistake you’ve made, it won’t be too late,” General Lane tells his daughter, suddenly making Cat Grant look like the most nurturing woman in the world.

* And if General Lane wins the World’s Worst Father award, surely Cat’s mother takes home the companion trophy. After spending hours berating Cat at her own media empire, Katherine Grant cancels the mother-daughter dinner they had planned for that evening, choosing instead to go to a hoity-toity dinner party at author Toni Morrison’s house. Cat suggests tagging along, to which her mother responds, “What could you possibly have to talk about with two Nobel Laureates and Margaret Atwood?” Well, at least now we know where Cat got those terrific people skills.

* But perhaps the most disconcerting family-related storyline is Alex’s, after she asks Winn to do a little digging into the DEO and find out what really happened to her father all those years ago. Winn reluctantly obliges, and he discovers a troubling piece of intel: When Jeremiah Danvers traveled to South America with another DEO agent to apprehend a hostile alien, both Jeremiah and his colleague vanished… until one month later, when that same colleague reappeared without a scratch on him, claiming that he didn’t remember anything about the assignment or Jeremiah’s death. That DEO agent, as you may have guessed, was Hank — and he has since deleted all digital records of that trip to South America, as if we needed any more reason to think Hank is one shady dude.

With that, I hand it to you. Your thoughts on Monday’s Supergirl episode? Drop ’em in the comments section below.