The confetti shower (traditionally reserved for “winner’s anthem” moments on reality singing competitions) landed smack in the midst of The Voice Top 11 results night — and my conspiracy theorist mind is struggling to comprehend if it was just a fluke or if there was some subtle subtext intended by exec producer Mark Burnett & Co.

It came, of course, during Team Gwen’s rendition of the New Radicals’ “You Get What You Give,” and that got me wondering if perhaps, after a season’s worth of Battle Round montages and typically poor placement in the live performance lineup (save for last night’s pimp slot), the show figured, “Let’s celebrate the only judge on the current panel who doesn’t have a Voice trophy on her mantle!”

It certainly could’ve been a case of “Crikey! Gwen’s hapless Braiden Sunshine was the second contestant sent to safety this week — this calls for some kind of fanfare!”

Or maybe it was merely a “thank you” to Gwen and her trio of proteges for staying in tune during their group number — which is far more than can be said for coach Adam Levine, whose subsequent cover of the Beach Boys’ “Wouldn’t It Be Nice” sounded like a rabid hyena with its tail caught in the door of an SUV. (Don’t be angry with me, Voice fans — in the spirit of Thanksgiving, I’m going easy on People’s erstwhile Sexiest Man Alive.)

What does Adam care, anyhow? For the second straight week of the Season 9 finals, the elimination came down to a Team Gwen Vs. Team Pharrell showdown — with the entirety of Teams Blake and Adam sailing through to the Top 10 without any Twitter Save hootenanny.

Shall we get to said results right quick?

Bottom 2 and Their “Save Me” Songs
Evan McKeel, “Lets Stay Together” — Grade: C+
Korin Bukowski, “She Will Be Loved” — Grade: C-

I wasn’t especially inspired by either song choice or performance, but Evan’s intermittently flat vocal at least had some awkward hip-swaying and a couple of sweet glory notes. Korin seemed like she’d been saddled with an utterly random song choice, and her final big note was nuts-and-bolts-in-a-blender unpleasant. Which is why I rallied behind Evan when it came time for the Twitter Save:

Alas, it was all in vain! (Don’t you just love how NBC sucks any suspense out of the process by blaring the real-time results on the screen all the way through commercial breaks?)

OK, your turn. What did you think of Top 11 results? Did America get it right with the Bottom 2? (If “yes,” what is your explanation for Braiden’s safety?) Was the right artist saved? Sound off in the comments! 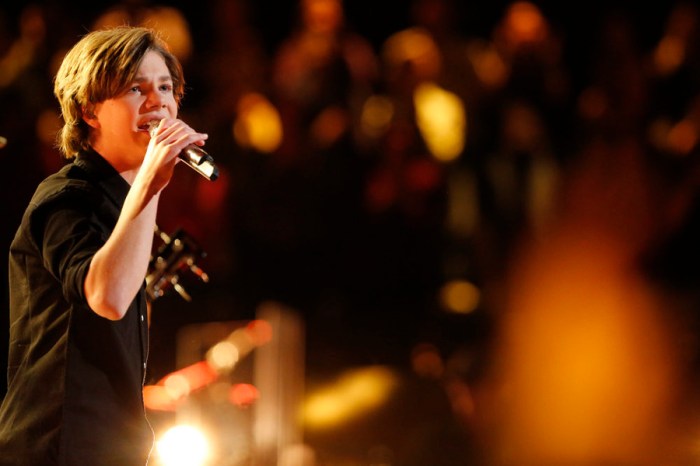