Is it just me, or did Scream Queens‘ “Thanksgiving” episode feel a hell of a lot more like another hour of Halloween?

Then again, I suppose a severed head showing up on the dinner table — R.I.P., Gigi! — could happen on any day in Kappa Kappa Tau, holiday or not. But let’s back up for a minute, because there was a lot (of nonsense) to digest this week.

In typical this-makes-no-sense-but-hey-why-not fashion, Wes deduced that Grace is the killer, at which point everyone else in the house — who, just moments earlier, had agreed that Dean Munsch was the other Red Devil — concurred with Wes’ accusation. Approximately two seconds later, following a ramble-y interjection from Pete, Grace was proven innocent, turning the Great Finger of Guilt towards her “hashtag” father.

But neither of those accusations could hold a candle — or even a severed head — to the next bombshell: Boone was Wes’ son! Sure, we also learned that Grace was in the house when the former sorority president accidentally melted off her own skin, but how were we supposed to focus on that after finding out the truth about Boone?! 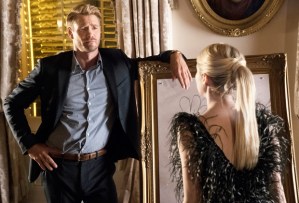 Yes, friends, Hester “Poo Belly” What’s-Her-Last-Name is still with us; in fact, because she was wearing her neck-brace at the time of her fall, it’s possible her scoliosis has been permanently fixed! Chad’s mother (the incomparable Julia Duffy) and father (Alan [Still] Thicke) did everything they could to get rid of the girls, from offering them money to subjecting them to a twisted game of Pictionary — though I have to admit, I laughed embarrassingly hard when the phrase turned out to be “neckbrace whore.” (The guest-casting in this episode was truly phenomenal, especially Lucas Scott.)

Ultimately, Chad’s scorned exes decided it was in their best interests to stick together — completely sweeping Chanel’s attempted murder of Hester under the rug because, hey, this is Scream Queens — and stormed off to… well, you already read about that part.

OK, let’s break this episode down: Do you think we’re any closer to figuring out the other killer? Were you surprised to see Gigi’s head on a platter? And why doesn’t Chad Michael Murray do more freakin’ comedy? Drop a comment with your thoughts on the episode below.