This Monday on the fall finale of ABC’s Castle, as Kate uncovered a new clue in the LokSat mystery, Rick’s investigation into his wife’s mysterious behavior delivered sobering results.

After enduring six episodes of estranged “Caskett,” viewers this week got at least some of what they’ve been asking for, when the Case of the Week dovetailed with the LokSat investigation, leading to a case of “dueling hacker banjos” between Vikram and Hayley.

To briefly recap (seeing as a quite candid Q&A with the showrunners is coming your way at 11 pm PT):

When a cruise ship showgirl is found in the river with a bullet to her bean and an 8-ball of H in her throat, Kate boards the vessel on which the woman had been working — where she promptly crosses paths with Rick. With the ship captain being a real D about the investigation and the clock ticking until Rick and Kate will be forced to abandon the at-sea ship, the marrieds agree to collaborate on the collecting of clues. Hanging and comically hoofing with some dancing girls, Rick learns that the deceased likely has her personal items stashed somewhere on the ship. Kate meanwhile discovers that the victim had been mysteriously spending time below deck, in engineering.

Rick and Kate soon enough find a camcorder that the victim had been using to document the cruise ship’s discarding of garbage at sea, until she happened upon a crew member helping smuggle heroin in the trash bins. Kate nabs the guy in question, but back at the 12th, his public defender — Caleb Brown (played by Life Unexpected‘s Kristofer Polaha) — is no pushover. Rather, the attorney (whom Kate and Vik later discover has ties to LokSat) pokes holes at the accused’s alleged role in drug trafficking.

Meanwhile, Rick tasks Hayley with hacking Kate’s phone and determining the source of the cryptic text he spied last week. When they learn that it came from Vikram, the pieces start to come together, seeing as he and the whole AG massacre arrived on the scene just before Beckett bailed on her marriage. Rick then has Hayley remotely hack Vik’s computer, but Vikram and Kate are alerted to the breach whilst working at their new crimesolving lair (inside an abandoned strip club). As Hayley and Vik try to out-hack each other, Rick and Kate trade coy phone calls, trying (but failing) to not let on that the other is up to no good at that very instant. In the end, Hayley must cry uncle, when Vik “nukes” Rick’s computer.

Later, Rick confronts Kate at the 12th, revealing all that he has uncovered, having found himself following his own wife as a P.I. What hurts the most, he says, is that she never thought to come to him to collaborate on a ruse, to track LokSat together. Instead, “You like being broken,” he observes. 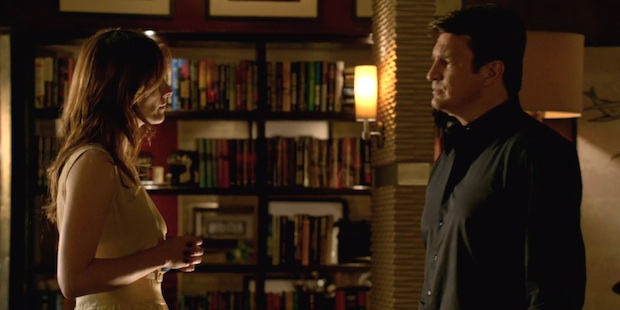 The episode ends with Kate visiting Rick’s loft, where she circles back on that uneasy conversation, now that each party’s cards were all on the table.

“Everything that you said, you were absolutely right,” she admits.

“Could you be more specific?”

“That our break-up could have just been a cover, so that we could bring down LokSat together.”

“Yeah,” Rick agrees. Reiterating his earlier point: “I wish you would have come to me.”

“Well, I’m here now. So let’s do it,” Kate says, assuming that bygones are bygones.

But they aren’t, as Rick indicates by noting, “It’s not that easy.”

“I thought that you would–“

“–just take you back, in spite of what you put me through…?” Rick is angry, frustrated, some combo of the two (but perhaps not as hot as he really should be, or should have been weeks earlier). “You did hurt me, Kate — and what’s worse, you lost faith in me,” he points out.

Kate, though, insists she does believe in him, in them. And she cops to making the wrong call all those weeks ago. “I didn’t realize how much I needed you until this happened,” she states. “Please, don’t make me do this without you.” (The irony of course being she is the one that first made herself do this without him.)

After a moment of thought, Rick agrees — “OK” — to maintain the illusion they are not together, even though they very much will be.” He then pulls her into a kiss, which she gleefully responds to, pulling him in for even more — followed by the promise of “very naked punishing” for her rogue antics.