Warning: The following Q&A contains spoilers for Blindspot‘s fall finale. If you have yet to watch the episode, turn back now.

You think your mind is reeling after those final moments of Blindspot‘s fall finale? Just imagine how Jane Doe feels.

What was shaping up to be one of Jane’s best days since she emerged from that body bag in Times Square quickly took a dark turn in the final act of Monday’s episode.

A quick recap: After successfully tracking down the woman who killed Patterson’s boyfriend (and throwing her over the side of a boat), Jane finally worked up the nerve to sneak out of her safe house, find Weller and kiss him — until they were interrupted by Weller’s young nephew, that is.

As is tradition on Blindspot, though, Jane’s moment of happiness was fleeting. On her way home, she was kidnapped by a few of Deputy Director Carter’s associates, driven to a middle-of-nowhere warehouse and tortured via waterboarding by Carter himself, in the hopes that Jane would remember something about her past. (And she did: a brief flashback to a time when she knew Carter and overheard him discussing something called Operation Orion.)

Of course, before Jane could get any information about the Orion mission, Carter was conveniently shot dead by the same man we’ve seen in flashbacks (and those bow-chicka-wow-wow dreams) as Jane’s ex-fiancee. And that’s when things really got interesting: Oscar presented our protagonist with a video of her past self, in which the long-haired Jane assured present-day Jane that “if you’re watching this, the mission is going as planned.”

What’s more, the video also revealed that the person who decided to wipe Jane’s memory, tattoo her with countless images and ink Weller’s name on her back… was Jane herself.

But how will this revelation affect Jane’s work with Weller and the FBI? Will a spark be rekindled between Jane and her old beau? And what does Blindspot‘s recent Season 2 renewal mean for the rest of Season 1?

TVLine caught up with series creator Martin Gero to get those questions, and many more, answered.

TVLINE | Let’s start with the episode-ending video from Past Jane to Present Jane. Walk me through how you wrote that scene, and why you chose to end the fall finale that way.
That was the plan from the second I pitched it, before the pilot was even written. That was one of the twists where I said, “This is our fall finale.” It seemed like the right time to do it. It wasn’t something I wanted to hold until the end of the first season, and you’ll see why in the back half of the season. It invigorates the show in a really great way. It doesn’t reinvent the wheel necessarily, but it augments in a way that the show feels like it’s growing and not stalling out. For me, my general frustration with shows like this is that they hold onto stuff for way too long. To have some sort of ending for this fall finale was important.

TVLINE | How will the information in that video impact Jane, both emotionally and in her work with the FBI? I imagine she’ll be a little skeptical of all future cases.
It’s going to impact her in a huge way, and that’s part of the reason we wanted to do it so early. We love Jane, and she’s a great character that we’re super invested in and that we care about. But it’s hard to write a character like that on a show like this that doesn’t have any secrets outside of what we [know]. She’s all id. There’s no hidden stuff in her, really. This [new information] allows her to play stuff, and it adds a whole layer to the show that is super exciting. It allows us to clarify some of the mystery while adding new parts to it, and it complicates her relationship with the team and with Weller, but in a really fun and beautiful way. 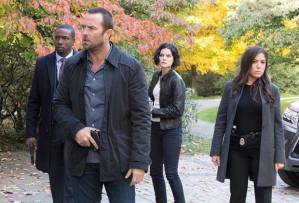 TVLINE | You guys got a Season 2 renewal fairly early. Will that affect the pace of Season 1 at all, in terms of how much you’ll reveal about Jane’s past?
It doesn’t affect it at all. This show was always designed to move really fast. We have an enormous amount of story we want to get through. One of the reasons we got the early pick-up was, in the conversations we were having just about the end of this season, you can’t help but talk about where you want the season to go. I hope [NBC] got excited creatively, and we went from there. We have not changed the pacing of the show a lick, depending on whether we got the 22[-episode order] or the 13 or the Season 2. For us, we always knew what this first season was going to be. My favorite types of shows are ones that feel like novels — each season feels like a novel in a series. This season has its own internal engine and a beginning, middle and end. It tees up what will be a slightly different, but hopefully very exciting, second season.

TVLINE | Jane’s other big moment in this episode was kissing Weller. Why was this the right time for that?
They’ve been circling around each other since the pilot. They almost kissed in Episode 5. For me, what’s so heartbreaking about this episode is she finally feels safe. By the end of Episode 9, they’re having a pizza party together. It’s the first time we’re seeing them all laugh and just have fun together. As awful as the David thing is, Patterson goes to Jane at the end and says, “I couldn’t have done this without you guys.” [Jane is] really cementing her role in the team, and finally kissing Weller and feeling good about it. Maybe for the first time since she came out of that bag, she felt like she was on stable ground. The second Oscar shows up, the floor falls out from under her feet. Those things make it emotionally interesting.

TVLINE | Is there a love triangle on the horizon between Jane, Weller and Oscar?
It will complicate things, certainly.

TVLINE | There were a few other loose ends left hanging at the end of this episode, the first being Carter’s death. How will that affect the Operation Daylight arc, as well as the new Orion storyline?
When people die on a show like this, it’s very possible we see them again in flashbacks. There’s no immediate plans for that. I love Michael Gaston, I think he’s so great. Nothing has given me more pause so far on this show than killing him. We knew we had to do it. It was in the cards before we even cast him, but he was so fun and brought such a great sense of danger and excitement to the show. He made a good case for why he should stay. And usually when an actor does that, you’re like, “Shut up, Michael.” [Laughs] But right up until we shot it, we were like, “Are we really doing this? This is crazy! He’s so good!” Unfortunately, Carter’s expressed intent was that Jane should die, basically since Episode 3. You can only reasonably keep someone like that around for a certain length of time before you’re like, “Why hasn’t he killed Jane?” He had to go. It had to be one or the other, and I didn’t want to kill Jane.

TVLINE | Carter is the third character that I thought would be around for much longer than he was, in addition to David and the bearded man following Jane around in the pilot. I feel like no one is safe.
That’s good. In a show like this, which has mortal jeopardy every week — if there’s not a sense that people can actually die on this show, then the excitement of the show goes away. I don’t think we’re going to have a Game of Thrones moment where we’ll [do a] clean chop, but who knows?

TVLINE | It seemed sort of inevitable that Patterson would break down at the end of this week’s episode. How will she cope moving forward?
She’s going to remain on the team. She’s a workaholic, so she’s going to try to work her way through suppressing it. It’s something we definitely deal with over the next part of the season. It’s tough for us, because that character is so fun, but she’s going through a rough time. I wrote Episode 11, and I had a bunch of great Patterson jokes, and upon second draft, I was like, “Too soon. Too soon.” [Laughs] She’s not there yet. She’ll get there again, but it’s a road back to wellness for Patterson. It’s a really interesting one.

TVLINE | And finally, can you speak to the decision to have Tasha resign? In what capacity will we see her when the show picks back up?
She didn’t want to be the mole. She didn’t want to be Carter’s pawn inside the FBI. She made a mistake taking his money and did the right thing. Hopefully, she will hear of Carter’s demise before she hands that letter in, but who knows?

Blindspot fans, what did you think of Monday’s fall finale? Grade the episode in our poll below, then hit the comments with your reactions!