Diane Lockhart’s “Where did she get that and how much did it set her back?” wardrobe tells the story of a woman who very rarely loses a case.

But while The Good Wife‘s steely, erudite law partner may be a superhero to those of us who think the ability to rock a chunky necklace is as impressive as leaping a tall building in a single bound, she does have her own particular brand of kryptonite.

This week’s episode finds the Lady Lockhart following her brilliant legal mind much to the chagrin of her bleeding liberal heart — and the hearts of her decidedly left-wing clients.

Just a few days after Scandal gave us its very pro-Planned Parenthood installment, it’s interesting to see The Good Wife paint a portrait of a proud member of the Liberal Elite working on behalf of an anti-choice client. She does it at least in part for the money (let’s not kid ourselves — Oliver Platt’s seldom-seen Reese Dipple has deep pockets that are vital to Lockhart-Agos-Lee’s survival; though it must be added that his Peter Gallagher-portrayed surrogate has failed to make any impression on me), but also because she believes that free speech laws are of equal importance, and that for better or for worse, the pro-choice movement must be strong enough to stand up to the most scathing attack.

It’s just a pity for Diane that she takes her “I’m doin’ me” stance at the exact moment Grace Florrick starts cold-calling potential clients — faux office noise enhancing her credibility in the background — without anybody realizing she’s not old enough to legally join Alicia during her regularly scheduled tequila breaks. Is this twist entirely realistic? Probably not — seeing how Grace’s school schedule ought to preclude her from having the time to bring in $7.16 million in new business for Florrick-Quinn. But let’s go with it for the time being — especially if somehow it all winds up with Diane and Alicia swilling gin martinis and laughing and kibitzing as Mariah Carey’s “We Belong Together” plays in the bar behind them. 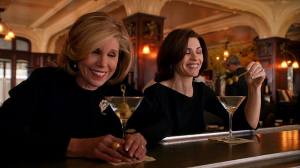 Before we run down what happens in “Restraint,” allow me to photographically take you back — not so far back, in fact — to a simpler place and time. [Siiiiighhhh] OK — recap time!

CASE OF THE WEEK | Diane agrees — with a little prodding from Reece’s team — to privately cross-examine a woman who wants to sue a women’s health clinic for selling fetal tissue from her abortion for medical research purposes. Diane quickly discredits the woman, but the video of the doctor who did the procedure, casually spouting off lines like “we can keep track of what you need — a heart or a liver” and quoting a going rate of “$100 per specimen” is pretty ugly. Diane, unflappable as ever, notes the average American also couldn’t handle knowing “how the hamburger ended up on their plate” — but when the anti-choice group Citizens for Ethical Medicine are slapped with an injunction stopping them from posting said video, Diane cannot abide by the “prior restraint” philosophy being used against them. If the video proves harmful, the doctor and clinic in question can sue for damages after the fact. But first-amendment rights dictate the video shouldn’t be shut down before it’s seen the light of day — and it’s a compelling enough case that La Lockhart agrees to argue it (all while wanting to strangle the Christian conservative who shot the footage).

There are plenty of intriguing legal twists, but the most shocking of all is when the judge in the case calls Diane into his chambers for a private session and tells her “this is not your case” — adding that they can both agree they need to do what’s necessary to make sure the video doesn’t see light of day. Except Diane’s obligation to her client, to the facts at hand, trump her own pro-choice beliefs. She asks for a new judge — seething to the presiding jurist that “it’s not fair you, who are biased, to get to rule on your bias!” When he shoots back that he won’t step down, and that he’ll give Diane’s objection “all the consideration it deserves,” her raised eyebrows prove such a thing of vicious beauty that I don’t know whether to applaud or hide behind the couch. Diane tells Dipple’s guy that he’d be better off getting a different lawyer to finish out the trial, and Cary applauds this as “a way out without backing down.” But in the end, Diane’s hard line costs her the business of clients including the National Council on Women’s Rights and The Justice Center — and by the end of the hour, we learn that’s not just mere pocket change to Lockhart-Agos-Lee.

AMAZING GRACE | Grace overhears Alicia and Lucca’s conversation about their struggle to stay afloat as a fledgling firm — and Alicia (not taking it all too seriously) tells her daughter she’ll give her half a percentage point of any cold-call business she brings in. Alicia and Lucca agree to an “eat what we kill” arrangement – meaning either one keeps two-thirds of any business she brings in — and I wonder if that’ll raise its ugly head in future weeks. But for now, the women seem to be on the same page. We learn Louis Canning is courting Lucca — and she seems to be semi-open to his courtship. But when he finally breaks it down and tells her the three big clients he’ll want her to handle — she immediately brings the names back to Alicia, and they try to poach them for Florrick-Quinn. Alas, their pre-meeting prep (Alicia refers to the firm as “Florrick-Agos” at one point) means they walk away empty handed.

Just when things seem hopeless, Grace strolls in and reveals she’s brought in four new clients — oh, and she’ll be collecting her $35,800 in commissions, mmmkay? Beats making roast-beef sandwiches down at the local Hardee’s, eh? Maybe ALicia should encourage Grace to postpone college and help them build their practice for the next 24-36 months. By then, the kid won’t need a single student loan to pay for her education!

THE GOLD-EN AGE OF ROMANCE | Eli gets more intimately involved with Peter’s new big-money donor, Courtney Paige, in more ways than one. Sure, he’s concerned that her new plan to provide a $75,000 salary floor for all of her employees will look super socialist, and taint public opinions of Peter’s presidential campaign. But he also seems a little googly-eyed every time they’re together. While Alicia’s counsel does little to sway Courtney’s new plan, it doesn’t stop Eli from lingering in Courtney’s office, wondering if she’d consider offering unlimited vacation to her charges. That’s just “cynicism disguised as benevolence,” she smiles, noting that companies who offer unlimited vacation often wind up with employees who take less than two weeks off, so paranoid they are about proving their worth. So why is Eli still there? What’s his real motive? “My office is the size of your bathroom — and I don’t have the money you have,” he says, his usual swagger oddly absent. “Come here,” purrs Courtney. And he leans in to kiss her — maybe rediscovering a little of the humanity lost when Peter fired him, when his whole existence devolved into political backstabbing and plotting. Will love save Eli in the end? Or is Courtney just another avenue toward political power? Time – or the remainder of Season 7 — may tell.

With that said, I turn it over to you. What did you think of this week’s Good Wife? Which twosome are you most invested in: Alicia-Lucca, Alicia-Jason or Eli-Courtney? Sound off in the comments!