Just as the Scandal audience was caught off guard by the fall finale’s abortion scene, so too was the ABC series’ cast as it sat down for the conversation-stirring episode’s table read on Oct. 6.

“Look, it was the midseason finale, and Shonda [Rhimes] is known for sort of shaking things up,” Scott Foley tells TVLine. “And while David giving the bracelet to Elizabeth and then giving it to Susan was really cute, we were waiting for something big to happen. And for us, there were two big moments, obviously.”

The first sequence that gave the cast pause was the gradual reveal that Olivia was in a doctor’s waiting room, about to end a pregnancy that the audience did not even know existed. “The room went silent,” Foley says of the table read, “when they read the part about Olivia going into the room and getting the abortion.”

The scene itself was similarly wordless, save for Joe Morton’s overlapping Shondalogue from a neighboring intense moment, as Huck held Rowan captive. In the produced edit, there was also “Silent Night” playing over the montage. When I asked Foley if the stage direction for Olivia’s scene specified the procedure in progress, he retrieved his script to confirm the answer. As he read to me:

Olivia, the only patient in this room, watches Noah Baker on TV. In the corner of the room, her two Secret Service agents hang back….

INTERIOR: CLINIC EXAM ROOM, where Olivia lies back on the exam table, One foot slides into a stirrup, then the other one. She adjusts the sheet covering her lower half. As the female doctor’s needle disappears under the sheet, Olivia winces. The female doctor places the needle on her surgical tray, she picks up a cannula, her hand disappears under the sheet again. As the female doctor switches on the machine, Olivia clutches the side of the table and stares up into the sky. Because this time there’s no hand to squeeze, no face to find comfort in. This time, it’s just Olivia — and the hum. There’s always the hum. On an emotionless Olivia, we END ACT V.

“There was no direct mention of abortion,” Foley realizes.

As the cast at the table read processed for the very first time — save for Kerry Washington, who Foley believes knew ahead of time — the surprising moment, “There were no gasps. It was just quiet. There were a lot of looks around,” Jake’s portrayer recalls. “I think I was sitting next to Katie Lowes, and I might have put my hand on her back or shoulder or something. Because I don’t know if everybody got it. But for me, it was glaringly apparent” what had just happened on the page.

The fall finale’s other 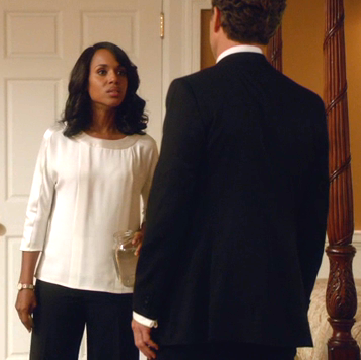 jaw-dropper was “what looks like the end of Olivia and Fitz,” Foley says, referring to the eight-minute-long break-up discussion-slash-fight, in which harsh words and accusations eventually gave way to a sad acceptance that they don’t work when Fitz is “available.”

At the conclusion of a Scandal table read, there is “always, always” applause from the seated cast, Foley says. “And there was applause for this as well, but not from a place of ‘Yea!’ but ‘Wow, that was a really powerful episode all around.’ We were really proud of it.”

And to think, viewers ultimately only laid witness to about 66 percent of what was scripted.

“They were 22 minutes long on this episode,” Foley reveals, “so the amount of material that was cut from this would blow your mind.”

Coming up on TVLine: Scott Foley weighs in on Jake’s deadly decision, his strange “bond” with Rowan and whether there’s new hope for Jake/Olivia.