ABC’s Scandal on Thursday night dove neck-deep into some hot-button topics, and as such really, really got people talking — on both sides of the aisle.

For much of often timely drama’s fall finale, Senator Mellie Grant delivered a filibuster on the senate floor, in opposition of a bill that would decrease the government’s discretionary funding for Planned Parenthood. In the course of her historic spiel, Mellie cited examples from the bill — all of them actual and remarkable government expenses (see: talking urinal cakes) — to make her case for Planned Parenthood having a more secure financial future.

As if that wasn’t enough to stir the pot, the series’ central character, “white hat” Olivia Pope, was seen getting an abortion, of a pregnancy we didn’t to that point even know she had.

In a statement issued late Thursday, 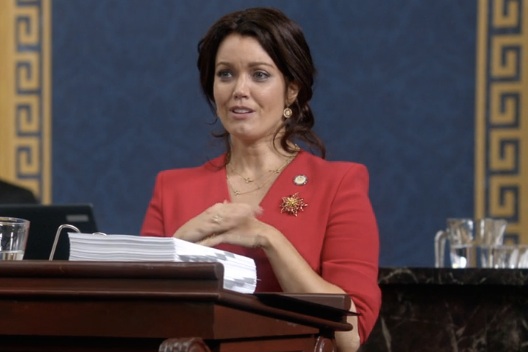 the Planned Parenthood Action Fund’s Cecile Richards said, “We applaud Shonda Rhimes” for illustrating “that our rights to reproductive health care are under attack,” that without the organization’s services, “millions of people would suffer.”

“[This] wasn’t the first time one of Rhimes’ characters had an abortion, yet tonight we saw one of our favorite characters make the deeply personal decision that one in three women have made in their lifetime,” the statement continued. “We just hope those in Congress — and throughout the nation — who are steadfast on rolling the clock back on reproductive health care access are taking note.”

Offering up an opposing viewpoint on Scandal‘s soapboxing, the Media Research Center — which describes itself as a media watchdog with a “commitment to neutralizing left-wing bias in the news media and popular culture” — issued a detailed takedown of what it called a “ridiculously over-the-top” “hour-long commercial for Planned Parenthood.”

The MRC posits that Planned Parenthood has always been part of government’s discretionary budget (and thus wouldn’t have suddenly been “moved there”) — since a Title X program would never receive “guaranteed” money. They note that even in Mellie’s worst-case scenario, “the abortion behemoth will survive without government funding.” The watchdog also takes issue with many of the stats stated by Mellie, including the claim that abortions account for “only 3 percent” of Planned Parenthood’s services.

As for the in-episode abortion, the MRC concludes its piece by plainly observing: “Olivia Pope was randomly… out getting an abortion set to the tune of ‘Silent Night.’ Seriously.”

Do you think Scandal fairly explored the Planned Parenthood issue? Did the show go too far in having Olivia secretly terminate a pregnancy?