Ask How to Get Away With Murder creator and executive producer Pete Nowalk if he loves or hates his job, and his answer will depend on the show’s most recent episode. “I’m really proud of [the fall finale], but yeah, it could all come crashing down,” he admits.

Such are the perils of juggling at least a dozen intense mysteries — involving multiple dead bodies, childhood traumas, coverups, hookups and a recently fired gun that seems to contain the fingerprints of every major character.

Then again, “if we’re gonna go off the air,” Nowalk says, with a laugh, “I’d rather go out with a bang than to go down because it was boring.”

TVLine caught up with Nowalk late Thursday night – just after Episode 9 aired on the East Coast — to dish the “Christophe,” mystery, Asher’s dark decision, Annalise’s gunshot wound and the multiple “dangling chads” that’ll be dealt with when the show returns Feb. 11 (10/9c on ABC). 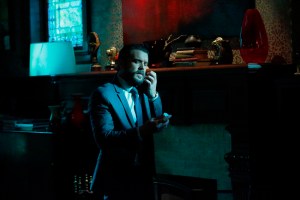 Every series regular character could or should be behind bars at this point. Does that make you anxious? Does it upset you? Is your series finale eventually going to take place in hell?
[Laughs] Oh my God, aren’t we already in Hell? Yes, it makes me anxious for the characters. It doesn’t make me anxious for the show. The car is just driving into a skid here, and what Bonnie said in the middle of the episode is true: “We say we’re just protecting ourselves, but there’s a point when we’re the ones people need to be protected from.” That point has happened. They are all immersed in this crazy, criminal behavior. They’re dangerous. And they have a lot to deal with in terms of their guilt and their conscience when we come back [in February].

Asher is now an actual murderer. It’s pretty horrifying when you realize he left Sinclair under his car for 30 minutes before Bonnie arrived. Did you go into Season 2 thinking he needed blood on his hands in order to be able to remain part of this core group?
We definitely did not set out with that in mind. It actually hurt me to make him part of the murders, because his levity is one of my favorite parts of the show. It just felt the most real and honest outcome for the character. And we set it in motion with Emily roping him into this mystery and using him as a mole. From that point on, he was on a path to Hell. 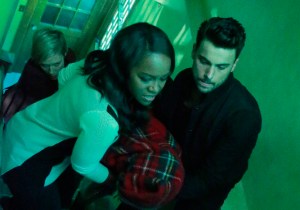 Did you ever think of zagging, or having someone else kill Sinclair on his behalf?
We always think of that kind of thing. But honestly when things scare me — when there’s the urge to keep Asher the same — that’s when you [have to commit]. I’m really excited to show this new side of him — where he goes and how he copes. It’s going to look so different on him than the rest of the group.

Is there any way the Asher “victory dance” can happen again, in this new reality?
I sure hope so. People compartmentalize, so part of his coping mechanism might be to dance it out a little bit.

As Sinclair taunted Asher about his father’s suicide, she mentioned what his father did to Tiffany. Was she talking about the cover up of her gang rape — or was he somehow more involved in that crime?
Ooh, that’s a good question. No, she’s referring to the cover up, as far as she knows. Emily rightly believes what his dad did — taking away this girl’s voice — was a heinous thing to do. She meant every word she said — and I agree with her on that point.

I always felt like Sinclair was the worst — but in actuality, she’s not.  A lot of her motivations were morally sound.
That’s how people felt about Hannah last season as well. She was actually just looking for her brother — that’s a really relatable, good instinct. That’s the fun of this TV show, that you can hate the wrong people.

This fall finale — I felt like it had twice as many twists as Season 1. But seeing Annalise and Eve in flashback, watching a young Wes get questioned about his mother’s death, and Eve asking, “What have we done?” — that was chilling. It feels like our options are that Wes killed his mom, and Annalise and Eve covered it up. Or Annalise and Eve killed Wes’ mom, and then made it look like a suicide. Are there other possibilities than that? And what can you tease us with to tide us over til February? That’s a long wait for answers — an almost cruel wait!
Would you rather we leave you with no cliffhanger? [Laughs] Of course not! Those are all the right questions to be asking, and those are all possible, but there are other possibilities, too — things I can’t say. I’m in the same state of mind as you. We’re not that far ahead of you guys [in the writing process]. We’re asking the same questions, but we have a theory right now and I think it’s pretty cool.

Law school is not forever. The Keating Five have been through a lot. You’re obviously going to see a Season 3 and probably beyond. Do you grapple with whether Wes, Connor, Michaela, Laurel and Asher will remain a core part of the show? Do you debate the idea of a new freshman class coming in as the show evolves?
We don’t debate it — because we’re so busy trying to write the next scene, honestly. We’re so behind schedule I can’t tell you.  [Laughs] But yes, while that’s a really big question for me, I don’t ever want the show to have rules to it. Annalise is a law professor right now. Does that mean she always has to be? Does she always have to keep these kids around? I think they’re bonded in a way that’s for life — or ’til the end of their lives. What’s happening in TV now is that you don’t have to stick to a formula — and you can’t. There’s too much else on the air. The minute people figure out the joke, they’re going to move on. Still, yes, it’s something I worry about.

It’s a good problem to have. Knowing Season 3 is inevitable — not having to think, we’d better have a way to wrap this up in case we’re cancelled!
Well, I still do think that. [Laughs] You’re only as good as your last episode. 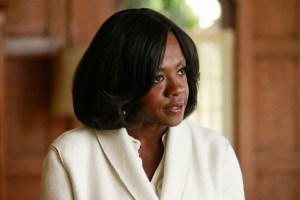 There was a Murder on the Orient Express-in-reverse quality to Annalise’s shooting — somebody, anybody shoot me! Where did that idea spring from? And was it fun having her taunt so many characters, trying to get them to pull the trigger, leave her bleeding?
Early on, we had the pitch that Annalise would want herself to be shot in order to cover up the crime scene. When we were writing the script, we kept changing it, making it messier. But we never knew Annalise was going to tell Wes that Rebecca was dead, until we were writing it. It could’ve been any of the people in our cast. It could’ve been Philip, and, in fact, every time I watch the scene, I wonder, “Should it have been Philip?” [Laughs] What’s fun is to write that scene, but what’s even more fun is to watch it for the first time and see what they all bring to it. It goes to defcon levels of acting and excitement — and it’s different than I picture it in the best way. Viola is so vulnerable — I feel like she looks like a little girl when she’s begging Wes to shoot her. All of them are just so crazy good.

Speaking of “crazy good,” talk to me about the two scenes where the camera whirls around a horrified, then resolved Annalise. The first time we have no idea what she’s dealing with, the second time we do. Did you write it to look like that?
We did write it. But Bill D’Elia is our producing director and he’s been nominated for tons of Emmys — he’s a genius, and he made a little adjustment in the way he had Viola turn toward the camera, almost counterclockwise. The other genius is Viola. You see her go from devastation to master planner in the blink of an eye. I could watch that moment over and over where she picks up the phone and says, “Tell me you’re still at the house.” How did she just change everything, how did she just do that?!

There are some big complications left unresolved. We don’t see where Philip ends up, for starters. How quickly will Philip’s ultimate whereabouts rear its ugly head?
Yeah, and will it rear its ugly head? He might’ve driven off. He also might’ve been standing on the stairs. Who the hell knows. That Philip is tricky. They have a crazy chaos plan — to have the crime scene make no sense. And we’re going to come back two weeks later and find out where that plan stands: If it worked at all, it they’re all totally screwed, if they’re all already on death row. And Philip is a big hanging chad in our show. So is Levi. So is Catherine — what the hell is she going to say? What is Nate going to say? What is Caleb going to say? Who’s going to believe this story, if anyone?

You showed us a couple weeks back that Asher goes to the police to make a statement. But it’s not something that got addressed in the fall finale.
We left a few of the flash forwards as question marks for the first episode when we get back. We’ll obviously find out what happens with all of those in our first hour back. The Asher thing could go many ways. He could be confessing — he was in shock from the moment he hit Emily Sinclair right through buying that carwash ticket. Now that he’s coming out of it, does he just act like a normal person? Is him going to the police part of the plan? Or is it unrelated — does he want to make a statement that his cat is missing? [Laughs]

We also didn’t find out who killed the Hapstalls!
We didn’t! There are a lot of dead body mysteries! But that’s something we’ll have to answer as well.

Do you want to wrap that Hapstall mystery in Season 2?
Without having written past Episode 11, yes I hope we do. It’s not my goal to leave a case like that lingering too long. 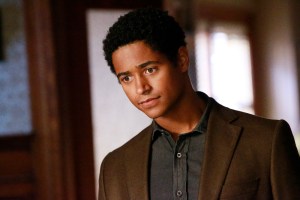 How can Wes go back to class, go back to the firm, be a part of the central story, now that he knows Annalise has some connection to his childhood as “Christophe”? How do you write yourself out of the corner?
We are in that [quandary] right now. Wes’ whole life and everything he knew has changed with Annalise whispering “Christophe” to him. He now has to question everything. She’s obviously going to be in the hospital. Does he want to talk to her? Will she want to see him? There’s a huge mountain the two of them have to climb if they’re ever going to recover from this.

Plus, Wes did not aim for the leg! And he knows Rebecca is dead — or at least that Annalise is now saying Rebecca is dead. And then there’s the question of how Annalise knows his name is Christophe. Which of those dilemmas will you tackle first in the February return?
We’re shooting that right now. It’s a big messy soup — and we can’t answer all the questions at once. We will parse them out in a way you’re not overwhelmed. But even for the characters, it’s all too much. I’d want to be shot, too! 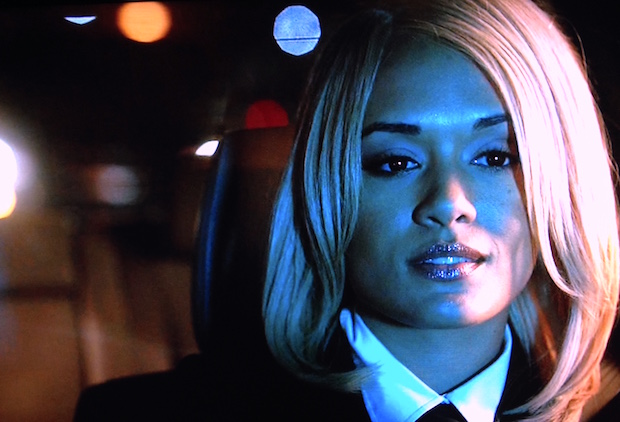