And you thought Pizza Rat was gross.

The Dec. 4 Grimm (NBC, 9/8c) finds the Scoobies – plus guest star Carlson Young (Scream) — running afoul of the mythical Rat King, and we’ve got your exclusive first look at the episode.

(If you don’t know what a rat king is, Google it. But don’t do so while eating, or before bed, or if you’re having a particularly good day…)

Per the hour’s official synopsis, a couple of Wesen who go sneaking around a dump wind up dead — courtesy of the Rat King — and Nick and Hank become involved when the Portland P.D. is called to the scene.

Elsewhere, a battered Trubel is taken to the hospital, and Nick and Meisner finally meet.

Take a good look at the photo below (click to enlarge), then hit the comments with your Grimmest of thoughts. 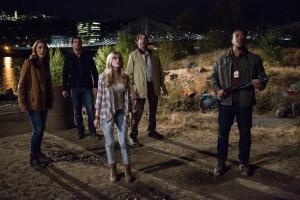