You can’t help but see a little irony in The Blacklist’s fall finale.

After months of living on the run, hopscotching from underground bunker to empty apartment and back again, it wasn’t The Cabal that finally got the best of Liz and Red. It wasn’t some demented blacklister that Red had his eye on for years, and it wasn’t even the FBI task force. (Well, it sort of was, but more on that later.)

Rather, the people who got the upper hand over Red and Liz were a ragtag bunch called Kings of the Highway, a bunch of trailer-park dwellers who make a living kidnapping and robbing people during their travels. In any other Blacklist episode, this unintelligent group would be a cakewalk for Red and Liz. But in the fall finale, they were the very folks who, at long last, got Liz arrested.

Briefly, here’s how it went down: At the start of the hour, Liz and Red are making their way through rural West Virginia, where Red tells Liz their fugitive life “will be over soon” — a sure sign that things are about to go very, very wrong. As predicted, their plan to exonerate Liz goes south at an unassuming rest stop, where Liz comes out of the bathroom to find that Red and his car are both gone.

We soon find that Mr. Reddington has been abducted and taken to a trailer in the middle of the woods, where the creepy (and unwashed) Kings of the Highway quickly carry out their plan to rob Red blind. (I know there’s always a method to Red’s madness, but why does he keep $25,000 in his pocket? For extra-extra guac at Chipotle?)

While Red tries to get out of this pickle, Liz tracks down Jasper, the tow truck driver who brought Red’s car to a nearby salvage yard after he was kidnapped. She finds him at a local bar and quickly turns the charm on — as well as a new name, “Kenya,” which is the least fitting moniker she could have possibly chosen — all of which leads back to Jasper’s apartment, where they plan to get freaky. But their tryst is interrupted by a phone call from one of the Kings: They’ve discovered that Reddington actually is Reddington (until now, he’d been calling himself “Kenneth,” a much better fake name), and they could make a fortune if they bring Red and “that Russian girl” to the authorities. Naturally, this information totally kills the mood between Jasper and Liz, and they duke it out in the truck driver’s kitchen. (Any Sons of Anarchy fans have a major Tara-death flashback when Liz was dunked in the sink? Still not over that.) 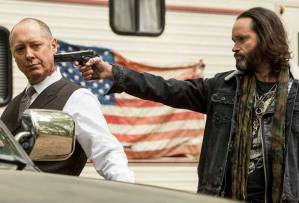 Liz ultimately gets the upper hand over Jasper, and she calls up the Kings to strike a deal: She’ll return Jasper to them if they return Red unharmed. But the leader of the Kings, Cash, says he couldn’t care less if Jasper lives or dies — no deal. And what a mistake that was. After realizing that Reddington is worth way too much money to kill, another member of the Kings, Pablo, turns on his co-conspirator and puts a bullet in Cash’s chest. Pablo ultimately agrees to the terms of Liz’s deal — but in addition to bringing Jasper, she and Dembe must hand over a mysterious care package that Red had been hoping to procure. We never learn what the contents of the package are, but they apparently hold the key to exonerating Liz — which makes it all the more disheartening to watch the parcel get handed over to Pablo and his skeezy partners in crime.

The good news? Red gets returned to Liz relatively unscathed. (And Liz manages to avoid sleeping with Super Creepy Jasper.) The very, very bad news? Ressler and his team had been tracking Liz all day, and shortly after Red is set free, the cops arrive. Red gets away, Dembe gets captured and Liz is left to hoof it through the woods… but she isn’t fast enough. Ressler catches up to her, gets her on the ground and — because he’s been waiting months to do so — puts Liz in handcuffs. (You had a good run, Liz/Masha/Kenya.)

* After realizing that Samar had done a search on Ressler’s laptop way early that morning, Aram is heartbroken to realize his crush slept with another agent. Samar offers Aram an apology, but his puppy-dog eyes remain in place for the rest of the episode. Sob!

* Oh, speaking of Samar? She gets fired. Indeed, after Samar confesses that it was she who undermined Ressler’s hunt for Liz and Red – not Cooper, who was initially blamed — Ressler sends Samar (who he slept with 12 hours ago) packing.

* Karakurt, Tom, Cooper and Charlene go on the run after three assassins break into Cooper’s house, hoping to kill the Russian. Thanks to a tracking chip in Karakurt’s chest, the group is quickly followed by Solomon and two of his associates — but Tom removes the chip quickly (and painfully) enough to get The Cabal members off their tail. From there, the foursome heads to a cabin on Lake Yvonne where they’ll hide out for a while — and in case you’re wondering how Charlene has access to this cabin, which is owned by her next-door neighbor, it’s because she was cheating on Cooper before he got sick with fake-cancer. Cheating! For shame, Charlene.

* Last, but certainly not least, Reven Wright pays a visit to Chairman Hitchen (returning guest star Christine Lahti), looking for information on a CIA operation that Solomon led back in the day. But before Wright can ask too many questions, Hitchen pulls out a gun and shoots the woman right in her chest. “I’m so sorry, honey,” she says as Wright bleeds out on her living room floor. “I’m going to miss you. I really am.” (Moral of the story: Everybody on this show has got some problems.)

With that, I turn it over to you. What did you make of Thursday’s Blacklist fall finale? Grade the episode in our poll below, then hit the comments with all of your thoughts!