When the ABC series premiered three-and-a-half years ago, the most the illicit lovers could hope for was a stolen kiss pressed up against the Oval Office curtains. Now, heading into the fall finale (airing tonight at 9/8c), Olivia and her epic wardrobe have been moved into the White House.

For better, or for worse.

In the wake of this monumental step, TVLine invited Tony Goldwyn to survey the state of Fitz and Olivia’s union and the obstacles in their immediate path — including but not limited to one “ticking bomb.”

TVLINE | If I had told you, back when we first spoke in Season 1, that one day Fitz would actually divorce Mellie, and Oliva would actually move in the White House, what would you have said?
I would’ve thought it would’ve happened a lot sooner than it has!

TVLINE | Really?
Yeah. I’m amazed at how long Shonda [Rhimes] has been able to kind of tease this out. It’s very skillfully done.

TVLINE | Because one could also argue that it’s almost the stuff of a series finale, you know?
Well, that’s true, that’s true. That’s maybe the other way that I thought about it — “If Fitz and Olivia ever get together, the show’s over,” but certainly there’s plenty of obstacles, as we can see, once Fitz and Olivia try and actually make this work.

TVLINE | I was going to say, the way 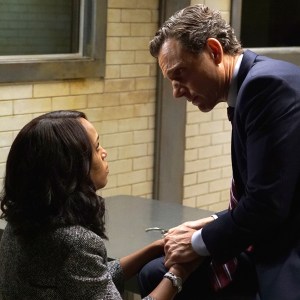 it’s played out in recent weeks, it’s almost for Fitz a case of “Be careful what you wish for.”
Exactly. That’s the thing that I’m really enjoying about this season, because I really wasn’t sure how long could you keep us apart and not start kind of repeating the same patterns. But I think it’s such an interesting situation, dramatically, where the President of the United States and the woman he loves kind of just come clean, which is what Fitz has wanted to do for years now. He’s tried many times and been thwarted by Olivia and Mellie, and now it’s actually happening, and I think he’s very happy about it, potentially, but it causes a lot of problems for Olivia. And obviously Mellie’s sort of a ticking bomb, we’re never quite sure what she’s going to do.

TVLINE | Speaking of Olivia’s reaction: How are we to read that final scene last week, where Fitz makes it very clear, “Yes, you and your clothes are moving into the White House”? He was pretty intense.
[Laughs] All I can speak to is Fitz’s perspective on it, which is not objective. I mean, he’s to some degree acting from a place of extreme stress. The way Fitz would explain it, and how he feels, is that he believes deeply that if he and Olivia just can get a chance to be normal, and to be together, then everything will be fine. He still believes that, even after this colossal betrayal of Olivia releasing her father [from prison]. The man who murdered Fitz’s son has now been saved by the woman he loves, and I wasn’t sure, when Fitz finds that out, if he could get over it, but the way Fitz has chosen to do it is see Olivia — and this is paternalistic of him — as a victim of her father, which I think to a degree is true. He sees Rowan as this grand manipulator, and he once again manipulated Oliva into doing his bidding, so Fitz decides, “I can do one of two things. I can renounce her, and reject her, and cut her off, or I can embrace her, and take care of her, and protect her, and enforce my will versus Rowan’s will, which is I’m going to create an environment where we can incubate this relationship, and we can be together. I’m done with this equivocating of back and forth, and I’m going to fix it. I’m going to handle it. I’m going to make it right.” It’s extreme and I think ill-advised of Fitz, because putting Olivia in a box is not generally the wisest course. [Laughs]

TVLINE | It’s like trying to get a cat into a travel carrier, you know?
It is, a bit, but he’s desperate. He’s desperate after that, and hopefully he can bring her around, hoping that she will understand where he’s coming from and he can protect her. That’s really what he’s trying to do.

TVLINE | Sometimes I feel like he almost wants to shout, “I’m all in — now push your own chips into the middle of the table.” She keeps saying, “I chose you,” but Fitz took a hit on this. This wasn’t easy for him, either.
That’s exactly right. And that’s what he can’t comprehend with Olivia. He doesn’t get it. And maybe he’s sick, but I think he’s just in love and obsessed with her. He doesn’t understand how he can be so “all in,” and she can say she’s “all in” but then she pulls back. Like Abby said to him earlier this season, “How many times does she have to tell you she doesn’t want this before you’re going to start listening?” And he just can’t hear it.

TVLINE | Do you feel that 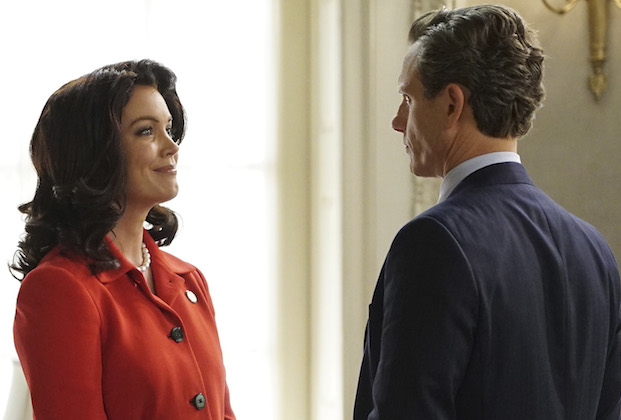 in the Fitz-Mellie breakup, enough moments of pathos were played?
In what sense do you mean?

TVLINE | Well, the sadness of the final dissolution of their marriage. I know it was touched on in some scenes — they would talk the way that people whose marriage was ending would talk — but then it would get offset by someone’s outburst or something.
Well, right now, no. Right now, it’s very toxic. I think that we had a couple of moments of that, like you said — like where Fitz reached out to Mellie on the balcony when they were discussing whether they’re going to do the Noah Baker interview or not, and he said, “Look, you are going to be the President of the United States, and I believed in you,” and he’s trying to speak to the partnership they’ve had that is enduring and all that, but then Cyrus gets in her ear and she balks at that. And then later on, when Teddy was playing behind the curtains and she says, “I don’t want to do that,” and he says, “Well, OK,” and they seem to be coming to terms…. But as often happens in broken relationships, particularly with a scorned partner, those wounds just don’t stop bleeding, and Mellie… she’s not having it. There’s that’s a huge scene when we were trying to sign the divorce papers that devolved into this ugly fight, and Mellie voting for the impeachment…. There’s just too much right now, there’s so much poison between them.

TVLINE | Well, that’s how it is in real life for people who live in houses that aren’t white. I’ve been there myself.
Yeah, I think it is. I think it’s pretty realistic, honestly, as outrageous and operatic as it is. And that’s what Shonda does so well, finding the emotional reality even in these super-extreme, heightened circumstances.

TVLINE | They’ve given you some 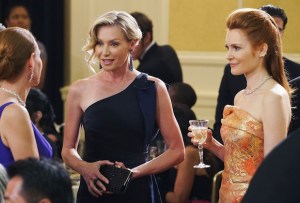 new people to bounce off of the past season-and-a-half — Darby [Stanchfield] and Portia [de Rossi], and even Artemis [Pebdani]. What do you enjoy about those distinct relationships?
It’s wonderful. Bringing Abby into the White House just gave a whole new texture to that world. It was always frustrating for me as an actor that I never got to work with the people in Olivia’s orbit, except when I was directing, and it’s fun to see how Abby’s character has evolved and changed. She and Fitz have a really interesting relationship. Similarly, with Portia. And then bringing in Artemis…. These wonderful actors come in and their characters bring new blood into this White House, which could be very insular. I mean, Artemis is just hilarious and yet Susan Ross also brings a kind of moral clarity to this weird dysfunctional world. In fact, she and Abby, I would say, are the only two characters in the entire show who have moral clarity. They’re the only ones in the whole series whose hands aren’t dirty. Everyone else, all the rest of us, are dirty in different ways. It’s amazing Abby’s never gone off the rails ethically.

TVLINE | What sort of drama can you tease for this week’s fall finale?
I really can’t tease anything, because I don’t want to spoil it for anybody, but you will have a deeper understanding of what the consequences of Fitz’s choice are, good or bad. Things really escalate. And a lot of the threads that have been followed these past nine episodes are all going to come to a screaming head.

TVLINE | Is there any cliffhanger to speak of taking us into the winter?
Well, it is Shonda Rhimes, so there’s a good chance of that!