It’d be simplistic though not inaccurate to say that whereas TV’s DC Comics-based series are very much about heroes doing super things, Netflix’s ever-unspooling slate of Marvel dramas — including Jessica Jones, which releases its 13-episode Season 1 on Friday — tend to focus on what these extraordinary individuals are up to between the saving of lives and fighting of crime. 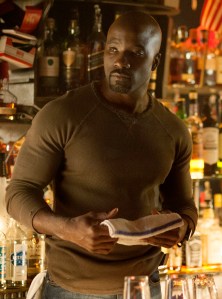 There’s also a drastic difference in pacing for the Netflix fare, as Daredevil and now Jessica Jones repeatedly demonstrate. For example, can you imagine Arrow spending a long minute on Oliver sitting quietly in the back of a taxi cab, his mind full of colliding thoughts? And yet we see Jessica do just that, as she struggles to come to terms with an improbable, ghastly truth. Consider it a perk of commercial-free streaming and how those “missed” minutes add up.

Krysten Ritter (Don’t Trust the B—-, Breaking Bad) winningly fills the title role, delivering caustic cutdowns in a way that’s almost as debilitating as the character’s intermittent feats of superhuman strength. Jessica mans a one-woman private eye operation, an occupation that mines her keen skills of observation and where her muscle merely proves handy, such as when ripping off padlocks like masking tape. Ritter’s lithe, unassuming build 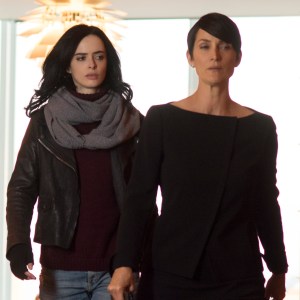 only makes Jessica’s effortless hurling of burly he-men across a bar a more provocative visual.

Said bar belongs to Luke Cage, cast as perfectly as the Marvel character could possibly be with The Good Wife‘s Mike Colter. (It’s no great spoiler to say that he and Jessica have a hook-up; it may arouse your interest to know, though, that the encounter makes the most of Netflix’s freer reigns, involving as it does two, ahem, extraordinarily resilient people.) Rounding out Jessica’s world are Rachael Taylor (666 Park Avenue) as Trish “Don’t Call Me Patty” Walker, a local news personality who’s inclined to overprotect her P.I. pal (and who may have secrets of her own), and Carrie-Ann Moss (The Matrix) as Jeryn Hogarth, an elite attorney whose firm occasionally recruits Jess despite her “methods” (when she herself is not juggling torrid personal drama; cue Devious Maids‘ Susie Abromeit as Jer’s comely assistant).

Soliciting and servicing clients for her Alias Investigations is almost incidental to Jessica as the series unfolds, seeing as a new case dredges up dark, dark memories of Kilgrave, a malevolent man who in a different time preyed on Jessica using his powers of mind control. 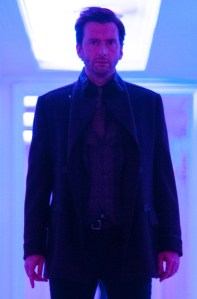 As played by Doctor Who‘s David Tennant, you quickly get the sense that this villain has no redeeming qualities, which makes Jessica’s sense of dread all the more palpable.

I recently tweeted, as I watched Supergirl, that I’ve perhaps hit “peak superhero lairs,” seeing as no less than, what, four different series now feature glossy, hi-tech hubs of well-staffed superhero activity? Jessica Jones, especially as a Daredevil chaser, is a palate cleanser for that, following as it does a lone wolf stationed in drab Hell’s Kitchen who’s lucky to have an office door on its hinges. With its aforementioned languid, jazz-scored looks at the calms between Jessica’s storms — and make no mistake, the fight sequences when they come around are a visceral thrill — its 13-episode run promises an in-depth study of one super-intense woman.

THE TVLINE BOTTOM LINE: Hmm, I think you feel a cold coming on. Better play it safe and call in sick Friday. Yeah.