You couldn’t really blame Ellen DeGeneres if her enthusiasm flagged a tiny bit after 13 years of hosting her eponymous talk show.

And yet Wednesday’s episode, which found Ellen giddily poking the grumpy bear known as One Direction’s Harry Styles (aka the one with The Hair), showed no such dip in energy.

Bully for her! Seeing how DeGeneres devoted the first half of the episode (along with an additional end-of-the-hour performance from the Warner Bros. lot) to the quartet and its new CD Made in the A.M., it was a nice counterbalance that the host allowed herself a few eye rolls (the better to connect with the large segment of her audience without 1D posters on their bedroom walls).

“They are very excited for your loneliness!” DeGeneres said, when the concert audience went gaga over all four band members raising their hands to indicate they were single.

Later, back in the studio, Styles came across as a less-than-enthusiastic interview subject, looking out into the audience and howling with mock laughter when cohort Liam Payne said he’d spoken a few times to former bandmate Zayn Malik since his abrupt exit from One Direction earlier this year.

“Are you lying?” DeGeneres asked Payne.

“Then why are you laughing?” she asked Styles, plainly.

Again, during a goofy game of “Never Have I Ever,” Styles seemed reluctant to play along. “I’m not having any fun,” he informed her. At which point, DeGeneres grinned like the friendliest boss in the land, and chirped, “When you change the way you look at things, the things you look at change!” 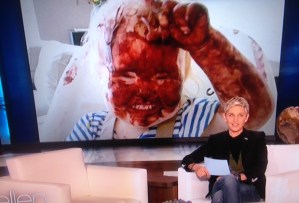 Appropriately enough, DeGeneres followed up One Direction’s Q&A with a new segment called “Why I Don’t Have Kids” — in which viewers share their photographic evidence of the evil that young’uns do. Best of the bunch? A little girl who began playing peekaboo with her sister while they finger-painted. (See photo.) “You’re gonna need a really good paint remover — and an exorcist!” said DeGeneres, in the episode’s funniest moment.

The episode ended with pint-sized sword-slinging martial artist Jesse-Jane McParland, who showed no shortage of excitement.

Regardless of whether her guests are A-listers or momentary viral-video sensations, though, DeGeneres’ sly humor remains the star of the show — a fact of which she’s not unaware. As she reminded Styles while zinging him for his mid-performance antics, “It was really bold of you. They seemed to enjoy it, but you just decided to spray water on the front row. They were like, ‘Ohmigod, he did it, so it’s OK!’ If anybody else, if a stranger all the sudden just opened water and poured it on them, they’d be, ‘Hey, you idiot!'”