Fight coordinator-turned-first-time Arrow director James Bamford was being humble, obviously, when dismissing the notion that this week’s episode was anything special in the action and stunts arena.

Because between the extended scuffle amid the cargo containers, Laurel’s badass infiltration of the looney bin and the Thea-vs.-Andy sequence that tumbled in and out of an elevator, to name but a few moments, this episode delivered a flurry of fierce fights as well as some weighty character moments.

Setting things in motion, of course, was Diggle’s discovery that one of the “ghosts” they went up against in the course of stealing a MacGuffin from a biotech company is his “dead” brother Andy. But where you might expect John to be thrilled by this news, he cannot shake the fact that, per the file from Darhk, Andy had been involved in some super-shady stuff before his “death.” Oliver, and later Laurel, do their best to cue Diggle to see the positives here, but he is headstrong in refusing to give Andy the benefit of the doubt.

In the meantime, Oliver chooses 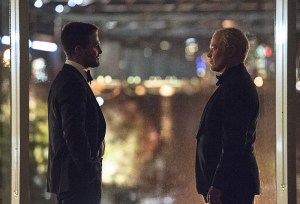 the restoration of Starling Bay as a linchpin for his mayoral campaign, as much as adviser Alex dismisses the ideas a “hippie-crunchy.” But Oliver seems to have hit a nerve with Damien Darhk, who shows up at a PBA benefit to A) offer the candidate his support in any way possible, but ultimately B) strongly warn the wannabe mayor to steer clear of the bay — lest he suddenly find himself “opposed.”

Felicity turns to Ray — who’s stalling his return to “life” — for help in examine the ghost’s tooth they have, and he eventually traces it to an old psychiatric hospital, which thus must be some “base” for H.I.V.E. With Diggle wholly disinterred in retrieving his brother, Oliver, Thea and Laurel proceed to infiltrate the building. Thea is the one who finds herself fighting Andy, and she ultimately KOs him with a tranq arrow, only to then come face to face with Darhk himself. Yet when the mystical man goes to use the Darhk Death Grip on her, it… backfires?!

Meanwhile at the outside skirmish, Oliver gets an assist from The Atom as well as, in a life-saving moment, Diggle. Back at the lair, Oliver comes around to John’s idea to take on Darhk in broad daylight versus in the shadows/from the “inside.” Diggle then goes to talk to his locked-up brother, who is still standoff-ish (perhaps still drugged by the yellow capsules Darhk gives his ghosts?), and who also confirms that every dirty detail in his file is “true.” #CueDiggleTear

At episode’s end, Oliver meets the press to flaunt his bay restoration plan in Darhk’s face, vowing to “fight for Star City in the light of day, and never stop fighting” — a speech that frankly was a bit on the nose and all but drew a map from Green Arrow’s true identity to the mayoral candidate who’s the same height and build and has same calculated facial hair. 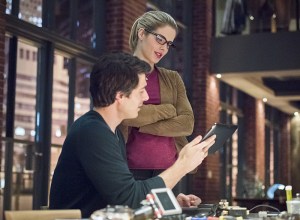 * Ray will not be returning to his old life, having figuratively watched his own funeral and seen that no one really cared, save for the renamed (dying) city. So he, like Sara, will take some time to find his new calling. I’m just spitballing here, but maybe they’ll head down the same path…?

* In the course of fending off a letch at a bar, Thea nearly killed the galoot — right in front of Alex. (Meanwhile, should we worry about the urgent call Alex had to take, or was that just to leave Thea unattended?) Later, Thea tells Malcolm that rather than “feed” on rando pedophiles and such, she wants to find a way to turn Damien Darhk’s touch, which instantly quells her bloodlust, into a permanent cure.

* In Lian Yu flashbacks, Oliver was invited to whip Conklin for duping him into killing Vlad — who, by the way, is Taiana’s brother. (Also by the way: the woman’s name is Taiana. She and Vlad had been workers on a chartered yacht.) Oliver invites Taiana to help him get the map he needs to uncover whatever Baron Reiter is after on the island. Or something.

What did you think of “Brotherhood”?