This Wednesday’s Arrow (The CW, 8/7c) is poised to pack a special punch, directed as it was by the series’ stunt coordinator-turned-fight coordinator, James Bamford.

TVLine spoke with “Bam-Bam” (pictured below) — a veteran of multiple Stargate series as well as Flash Gordon and the post-apocalyptic Jeremiah — about finally directing a full episode of television, straight drama scenes and all.

TVLINE | How did the opportunity to direct Arrow come about? Had you inquired about the possibility, did the producers offer it to you…?
I had mentioned to previous producers — on Stargate and such —  that I’d like to direct, but by the time we got around to it, the series would be cancelled. In this particular case, I mentioned to [showrunners] Marc Guggenheim and Andrew Kreisberg very early on that Arrow is the type of show where I’d love to take the experience that I’ve accrued over the years and apply it to directing a full episode. I’ve directed second units and action units before, and that has beome second nature to me, but I wanted to tackle the dramatic scenes as well. 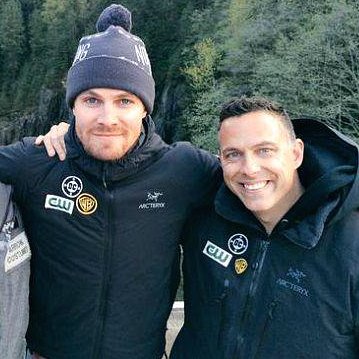 So at the end of Season 2, I flew down to Los Angeles and met with [executive producer] Greg Berlanti and simply stated the fact that this is what I’d like to do, and immediately he said, “That’s fantastic! This is how we go about it…” He was very specific about the methodology, he suggested that I shadow a couple of our current directors, and he said that in late Season 3 or early Season 4, I would end up directing an episode. And lo and behold…

TVLINE | What is this week’s episode about? What did you get to work with your first time around?
This episode is particularly Diggle-centric. It dives deeper into his backstory, answering a lot of questions that have been asked since the beginning of Season 1.

TVLINE | He did just find out from Damien Darhk that his brother was “dirty,” but I can’t imagine he wants to believe that.
Of course he doesn’t, but he really wants to put this to bed. He wants to have some resolution for all the feelings he’s had about his brother throughout the years — as anybody would. He doesn’t want to walk around carrying this baggage for the rest of his life. He just wants to live his life. This episode has a lot to do with family — not only Diggle’s but the family unit that is Team Arrow itself, and the interactions within. It’s titled “Brotherhood” for a good reason, as that applies to not only Diggle but also his relationships, 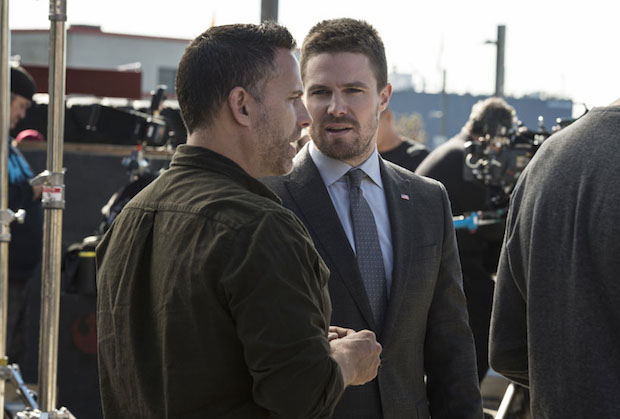 with Oliver in particular. You’ll see the strength of those relationships, and the weaknesses as well.

TVLINE | Did this script they gave you turn out to be particularly action-heavy, or was it standard for Arrow?
That’s funny — a lot of people say that, “Does this have a lot of action in it?” and I respond, “Which episode doesn’t?” [Laughs] Because at this point Arrow is well-known for being an action-packed series. I think in quantity it’s not particularly over-the-top. What I tried to strive for here, and what the writers — who are wonderful — allowed for is that although it wasn’t the largest budget, we tried to concentrate on quality in shooting.

TVLINE | The word is there’s a sequence you had been wanting to do for a while.
There is a particular action sequence which is one shot, from beginning almost to the end, that I’ve wanted to do for about 20 years now. So I’m very proud of that.

TVLINE | Do you have any idea how long that one-shot wound up being, in the final edit?
It was originally about 57 seconds of uninterrupted, fast-paced action involving actors, stunt people…. The list goes on and on. It’s wonderful. In the latest edit I’ve seen, I believe it got cut into near the end of the 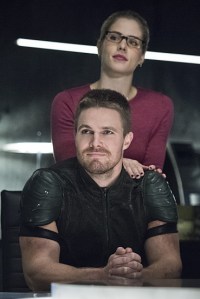 piece, so it’s probably about 52 seconds long. But the brunt of it, my favorite parts of it, are still intact, fully.

TVLINE | I hear that you didn’t, however, get to meet the unique challenge of directing a love scene.
[Laughs] Only because some skeptics doubted my ability to handle dramatic scenes, because of my background, obviously. But I’ve been involved in theater and television for over 25 years — I started out as an actor myself — and it’s all about character development for me. Even my fights, every time I design a sequence, it’s character-motivated, it’s character-driven, so I was really looking forward to doing something different for me, in the director’s chair. But I had such a fantastic time with the actors. Any note I gave they embraced, and because we are so close, I pushed some of the performances probably farther than you’ve seen with some of the characters in previous episodes. So I’m really looking forward to the fans’ reaction to some of their favorite characters getting these little moments. Particularly Diggle — the fans are going to learn a lot of things about him that you wouldn’t have known prior to this. Things about his psyche, how he feels about certain subjects, as opposed to being this “Yoda-esque” figure. He’s always the voice of reason for Oliver, but in “Brotherhood” you see, quite frankly, the roles reversed a bit. 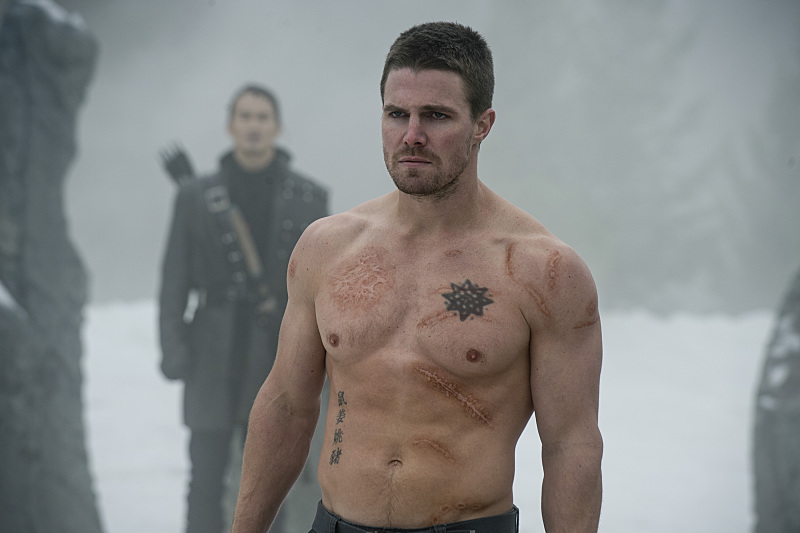 day-to-day job on Arrow, your series lead is one of the “brushes” with which you get to paint. Talk about Stephen Amell’s evolution as a physical actor, since the first day you met him. He’s obviously been “all in” from the start.
My partner J.J. Makaro, who is the supervising stunt coordinator on Legends [of Tomorrow], Arrow and Flash, called me when they were putting together the pilot and said he wanted me to be involved in Arrow, which he described as “James Bond meets Jason Bourne meets the best of parkour and MMA….” So immediately my interest was piqued, since I’ve been a martial artist since I was eight, and I’ve been a martial arts film fan since before that. But to begin with, I wasn’t a full-time fight choreographer — I came on as a stunt man — and I was saddled with also training Stephen and choreographing the fights. Stephen hadn’t had any prior martial arts training, boxing training, any sort of hand-to-hand combat whatsoever. But what he did have was a natural athletic ability. He is capable of and willing to do anything.

So I started Stephen off with some basics, mainly from Filipino martial arts — Eskrima, Kali. I wanted to get his timing up, because one of the things I don’t like about a lot of the combat on television out there is they use full-beat, old-school John Wayne timing — which is like, “Beat, beat, beat.” What I love to introduce is half-beat timing, which is “ba-bop, bop, bop, ba-bop, bop, bop.” That’s my style and Filipino martial arts delivers that, so I immersed Stephen immediately in Eskrima hand work, stick work, hand-versus-knife, knife-versus-knife and so forth. I avoided kicking, because it takes years and years and a lot of stretching and conditioning to be able to teach anyone how to kick, let alone an actor within a two-week period. And he just embraced the training, he embraced me as his sensei, and he did anything I told him, basically. Right of the bat, one of the first things he said to me was, “I never punched anybody in my life.”

TVLINE | Hey, neither have I!
Right?! So, you can imagine diving right into a role where you’re punching, like, a hundred people a day! It was quite a thing for him. He’s a very sweet person, a kind individual and a real human being, so he doesn’t want to hurt anybody, and that’s a hurdle that we had to get over right away. You have to tap into his natural ability to be aggressive, or to defend yourself. Stephen had a football background, among other sports, so what I did was I related a lot of our drills and what not to football.

TVLINE | Outside of the Arrowverse, 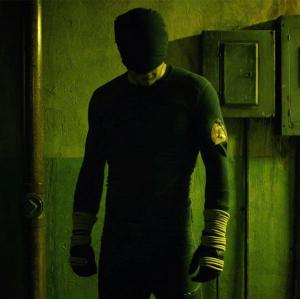 has there been a TV stunt or fight sequence that recently wowed you?
One just came on this Sunday night — [AMC’s] Into the Badlands. It’s nothing new to me, because I’m a big fan of Hong Kong cinema and have been for years, but they’re taking the quality that they’ve been putting into their film for fifty-odd years and throwing it into the American market. I was really happy to see that come to the United States finally. Its taken a long time for the American public to embrace something like this. There’s also [Netflix’s] Daredevil, which is shot on New York. Phil Silvera, who’s a good friend of mine, is the fight and stunt coordinator there. Of course there was a oner [an uncut, or seemingly, sequence] on Daredevil last year, in the hallway — I’m sure you’ve seen it. Oh, and there was the fight on [Cinemax’s] Banshee, which went in and out, through and around a car.

TVLINE |  That was effing insane.
Yeah, dude! That’s done by a friend of mine, Marcus Young. So those three [sequences] are definitely at the top of my list, by very talented stunt coordinators and very talented cinematographers. That’s when it works, when the stunt coordinator works very closely with the director of photography and the director, in order to advise on how to shoot the action. You have to shoot and edit it properly or you can have the best fight choreography in the world looking like two five-year-olds playing in the sand!