As you and your family gather ’round the Thanksgiving table next week, and Grandma launches into an uncomfortable political rant after Glass of Wine No. 4, just remind yourself of one thing: You’re having a way better Turkey Day than Kara Danvers.

Not only did Monday’s Thanksgiving episode deliver an energetic new villain to Supergirl‘s doorstep, but Kara spent the holiday mediating a fight between her sister and her foster mom, Eliza (played by former Supergirl Helen Slater) — and not even Winn’s puppy-dog eyes could distract Kara from the fact that James was on a romantic Thanksgiving getaway with Lucy. (Because, oh yeah, they’re back together now.)

ELECTRIC SLIDE | As you may have guessed from the episode’s title, Kara’s Adversary of the Week is Livewire, the evil alter ego of shock jock/CatCo employee Leslie Willis. After getting major flak from Cat re: her on-air bashing of Supergirl (seriously, how much thought did she put into the mechanics of Supergirl’s sex life?), Leslie is reassigned to the radio station’s nightly traffic report. But her first ride in the traffic chopper — I’m sorry, the “CatCopter” — occurs during a major thunderstorm, and when a bolt of lightning strikes the helicopter, it’s up to Supergirl to save Leslie from the crash. She does, of course… but not before another lightning bolt hits Kara and Leslie, putting the latter woman in a coma.

When Leslie comes to, she’s completely transformed into Livewire, complete with some awesome silver-blue hair — and the ability to manipulate electricity, which does not bode well for Cat’s Wi-Fi-dependent media empire. Livewire has got a serious bone to pick with Ms. Grant (considering Cat put her in that ill-fated helicopter and constantly censored her radio broadcasts), so she heads to the CatCo offices and destroys every single electrical outlet, desktop computer and obscure fancy statue in her path. (Supergirl shows up just in time to get Cat to safety and temporarily drive Livewire away, but because we haven’t reached the last 12 minutes of the episode yet, we know she’ll be back.) 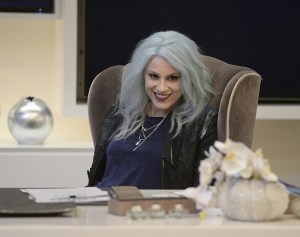 In the meantime, Cat and Kara do a little bonding in the workplace. Kara explains that she grew up with foster parents (because her real parents died “in a fire” — wink wink — when she was 13), and Cat’s icy heart melts a bit at this information. In exchange, Cat reveals she’s got some mommy issues of her own, and she takes the blame for turning Leslie Willis into the National City threat that she is now. (I wasn’t prepared for this much Cat Grant altruism so early in the season!) She decides to team up with Supergirl to take Livewire down once and for all — and all it takes to defeat the foe is a blast of icy water to the face. (Seriously. It’s all very Wizard of Oz, the way Livewire gets bested.)

THANKS FOR THE MEMORIES | But for Kara, taking down yet another villain is practically child’s play in comparison to her family’s disastrous Thanksgiving dinner. In the days leading up the holiday, Alex is worried sick that her mom will scold her for allowing Kara to come out publicly as Supergirl — and, although Eliza tries to play it cool at first, Alex’s hunch is ultimately right. After Kara’s first battle with Livewire, Eliza reveals that she’s furious with Alex for not protecting her little sister better. In fact, Alex gets reprimanded so much at Thanksgiving dinner that she finally decides to tell her mom — before the turkey is even carved! — that she works for the DEO, where her entire job is to keep Kara safe. Eliza takes it poorly, Alex storms out… and poor Winn doesn’t even get a slice of chocolate pecan pie. (But in true superhero fashion, Kara saves him some leftovers.)

Later, when Alex returns home, she finally confronts Eliza with the million-dollar question (and Chyler Leigh is heartbreaking as she does): “Why wasn’t I ever enough?” Eliza finally admits that she was always easier on Kara as a child, because she’d been through so much adversity at just 12 years old. Alex got all the tough love because Eliza knew she could handle it — and if you tell me you didn’t burst into tears as Eliza said, “You’ll always be my Supergirl,” I won’t believe you.

But that’s not all! (Is it ever?) After Alex and Eliza’s heart-to-heart, Dr. Danvers has an announcement to make to her two girls: Alex’s dad, Jeremiah (hey, Dean Cain!), didn’t die in a plane crash after all. Rather, he had been recruited to work for the DEO years ago — he volunteered to do so when the organization came looking for 12-year-old Kara — and he actually died working for… Hank Henshaw?! (Combine this information with Hank’s Freaky Red Eyes, and you just know this won’t end well.)

Oh, and let’s not forget about the events that occurred in The Friend Zone this week: After being invited to Kara’s Thanksgiving celebration — but forced to leave due to some major family drama — Winn returns to work on Monday ready to tell Kara what he’s most thankful for: her! (He even kisses her on the cheek, which totally makes her uncomfortable!) But Winn’s romantic moment is cut short by the return of James, who somehow looks even more muscular after a trip to Ojai than he did before leaving. Poor Winn. Hang in there, buddy.

OK, your turn. What did you think of “Livewire”? Drop all of your thoughts on the episode in a comment below.