How to Get Away With Murder‘s Conrad Ricamora has loved every minute of his time on ABC’s Thursday-night thriller, but he already has designs on his next project.

“I want to do a dramatic reading of Twitter and Facebook posts” from HTGAWM fans, says Ricamora, focusing in on the panic over last week’s cliffhanger, which found his character Oliver coming face-to-face with an uninvited stranger in his kitchen (aka the possibly homicidal Philip).

“There was a real outpouring of love and concern for Oliver, and a fear that he might killed off — but a lot of it was done in a very over-the-top way,” the actor says, laughing. “One person threatened to fight [showrunner] Pete [Nowalk]. Someone else said they were going to throw their TV out the window if my character died. There were a lot of memes, too — even ones with Beyoncé.”

Of course, as we learned in this week’s episode, “Hi, I’m Philip,” Oliver is alive and well — at least for now. In fact, Ricamora’s character would up going for a meal with Philip — then bringing him (and a surreptitious sample of his DNA) back to the law offices of Annalise Keating.

For those who felt anxious about Oliver’s fate, Ricamora can relate: After reading the final scene of Episode 7 — with his character’s life seemingly hanging in the balance — there were no reassurances from producers to the actor that he’d survive Episode 8. “On a show like this, there’s always a question of whether you’ll be killed off — and I think the producers like to keep their options open,” Ricamora says. “So I got to ride that wave of fear — and it actually helps as an actor, to not know what the future holds. That energizes everything I do on the show. When I read the scene [where Philip sneaks in to Oliver’s kitchen], I was excited about the storyline: This is gonna be nuts!”

Ricamora’s first thought was that Oliver would get kidnapped and tortured. “That moment had a very Silence of the Lambs feel when I read it,” he recalls. “But they wind up at the Soup Palace — and that name is pretty much the hardest thing to say with a straight face.” 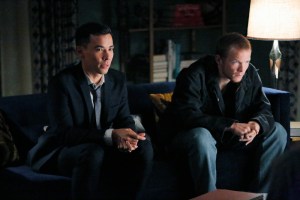 All laughing aside, though, Ricamora says that Oliver’s ability to sneak Philip’s straw for a DNA sample “in the midst of this terrifying encounter” is a signal that the mild-mannered I.T. guy is “really getting hooked into the world of solving crimes. He’s changed. Taking the straw was a quiet act, but also a huge revelation about how he’s exerting his own will and where he’s at in his headspace.” He suspects, however, this shift will be a source of tension in his character’s romance, seeing how Connor wants Oliver to keep his distance from Annalise’s business. “We know Frank has Oliver’s phone number — and I’d bet Michaela and Laurel do now, too,” Ricamora points out.

One other obstacle to the couple’s long-term future is the fact that Oliver has yet to learn the truth about Connor’s role in Sam’s death in Season 1. “Oliver knows Connor did something bad — something for which he could be arrested. But involvement in a murder is a whole different level of deception,” Ricamora says, adding that his feeling is Oliver’s response may depend on whether he discovers the truth independently or if Connor shares the intel himself.

While Ricamora says he’s under strict orders not to spill any spoilers about next week’s Winter Finale, he’s happy to discuss Connor and Oliver’s racy sex this week — in which the couple wound up giving each other simultaneous oral sex in Prof. Keating’s classroom. “The show is very sex-positive — and it’s the last one to air in the TGIT family,” he notes. “The script suggested 69-ing — and then there’s detailed choreography involved before we shoot it. I don’t worry about network censors or what’s too racy, though. I just focus on the story and what my action is supposed to be.”

And what to make of Oliver hearing a clanging noise in the hallway — was that just a university janitor or something more ominous? “I have no idea,” Ricamora admits. “It could’ve just been a noise, but the writers pay attention to everything. Maybe they’re leaving a door open. Considering Oliver and Connor were being watched through a Webcam, there’s an anxiety about being watched in general.”

Whatever the case, Ricamora says he’s glad Oliver’s diagnosis as HIV-positive hasn’t defined the character — but merely added another layer to who he is. “This show is tremendously groundbreaking,” he argues. “His being HIV-positive is not a driving point of the plot — Oliver just happens to represent a population that exists.”

Are you happy Oliver survived the “spilled milk” cliffhanger? Could he still be in danger? And are he and Connor destined to stay together? Sound off in the comments! 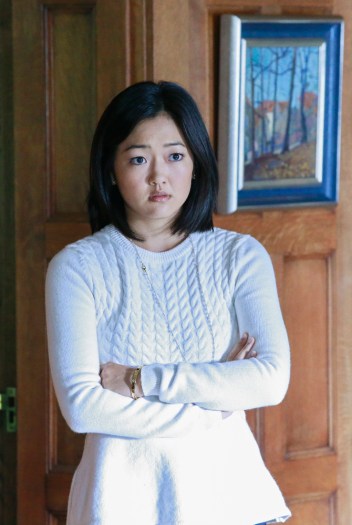