A lesbian and homophobe walk into a nightclub on this week’s Empire — but not to worry, they’ve got common interests: Namely April, a sparkly, sexually fluid and verrrry sexually available young woman who’d like to teach the world to sing. (And by sing, I mean, “check out the pistol-shaped tattoo on her inner thigh… and then explore other nearby landmarks.”)

So how come Mimi Whiteman ends the night weeping into her iPhone while Lucious Lyon digs up his most painful childhood memories and books middle-of-the-night studio time? Because, as Wilson Phillips reminds us in “Hold On” — allow me to paraphrase here — we know there’s pain… and soap opera characters in particular tend to lock themselves up in their chains of prior tragedies, bad acts and uncertain futures.

In the meantime, Cookie spends three whole days in bed – don’t call the doctor Porsha, she don’t need him, she don’t want him; Jamal gets rewarded for going behind his father’s back; Hakeem gets his mogul swagger back; and Boo Boo Kitty goes MIA. (Fret not: When you’re Cookie’s arch nemesis, sometimes you have to hole up in an all-inclusive spa in Santa Fe or Tucson or some such spot and work on your bitchy retorts.)

While you cook up other possible scenarios explaining Anika’s absence — and Becky’s, too! – allow me to recap the action from “True Love Never”: 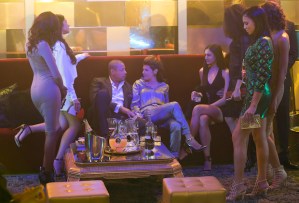 MIMI WANTS A MERGER | Mimi, unhappy with Empire’s stock performances, ignores Andre’s caveats and pushes for a merger with an up-and-coming streaming service. She sets up a cray-cray meeting between Lucious and the SwiftStream CEO — in a boxing ring — but it’s a blessing in disguise when Lucious knocks the guy out cold for dissing his lyrics. With Mimi toying with the guy’s morphine drip, Lucious is able to manipulate him into a deal that wouldn’t hold up in a court of law — but definitely sails over the low bar of soap opera plausibility.

COOKIE HEARTS RADIO | Cookie spends three whole days in bed with Laz — running Lyon Dynasty with a laptop and some food deliveries from a mortified Porsha. She concocts the idea for a new music festival called Cookie’s Cookout — centered on Lyon Dynasty artists — but the park she wants requires a deal with the gang that kidnapped Hakeem (and of which Laz is secretly a part). (Hrmmm… anyone starting to suspect he might turn out to be an undercover cop in the end? And would that be better or worse in Cookie’s eyes?) Hakeem crashes Cookie’s meeting with the thugs — and negotiates a better deal for Lyon Dynasty — but he also floats the idea that Cookie may be as sexmatized by Laz as she thinks Hakeem is with Laura. And for once, the kid may be right! 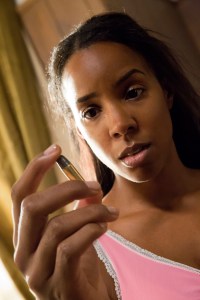 LUCIOUS NEEDS A LITTLE RESPECT | Lucious decides he needs to court musical kingmaker Huey Jarvis — whose living-room sessions somehow always lead to Grammy wins. When he plays him his duet with Freda Gatz, though, Huey tells him he needs to dig deeper lyrically. Lucious knows the guy is right, and it sends him spinning into a series of flashbacks where he’s stealing his mother’s bullets and burying them in the backyard. When she finds one he missed, we understand the childhood Lucious’ panic: Like his now adult son Andre, Lucious’ mother had a penchant for playing Russian Roulette — and that trip to the intersection of Memory Lane and Nightmare Boulevard gives “Boom Boom Boom Boom” a whole new meaning. After Mimi and Lucious kiss (GAAAAAHHHH! WHAT IS HAPPENING!?) he flees the scene of their three-way with April for a 4am studio session with Freda. It’s fiyah, as the kids say, even if Terrence Howard’s flow reminds me a little of Busta Rhymes. (The spinning cylinder and trigger clicks of his mother’s gun add percussive sizzle to the experience.) Mimi, meanwhile, also exits the menage a trois to take a phone call that sends her into ugly-cry mode — and makes Lucious surprisingly protective of her? Is she just playing him, though? She seems way too self-aware to be getting so messy in front of her partner in capitalistic hedonism, no?

JAMAL GETS HIS ‘HEAVY’ ON | Jamal is struggling with a new ballad called “Heavy,” and reaches out via text to Cookie — who puts aside their “we’re on separate labels” beef and gives him the kind of advice he needs to take the track to the next level. They wind up popping chamos and sharing headphones over dinner — and it’s the most joyous moment of the episode, if not the whole season — leading to an all-night studio session where Jamal has to sneak out to avoid detection by an early-to-work Hakeem. The end product is stunning — the “my whole damn kingdom sittin on top of me” hook is the best in an A+ episode for music — and scores him an invite to Jarvis’ living room. Lucious is clearly proud of his son — WHOA! An actual hug? — but his face also betrays a hint of jealousy from a man whose own needs always come just ahead of his family’s. 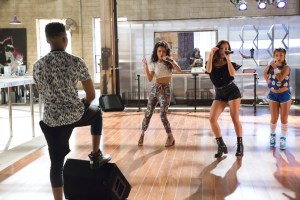 HAKEEM IS ALL ‘BESAME MUCHO’ | As Mirage a Trois rehearse their new single “Bottomless Mimosa” — hi, fellow gays! we have a new anthem for fall! — supporting player Carmen tries to physically bump Laura from her lead-singer slot, a move that Cookie cosigns. Hakeem’s not ready to give up on the girl whose nightclub performance captivated him down to his toes — so he has her meet with Tiana for a lesson in body movement and star quality — then takes her to a major thoroughfare and has her perform “I Will Survive” in Spanish to see if she can command a very tough audience. Of course she succeeds — that chick’s vocals are next-level — but Hakeem looks legit shocked when Laura plants a kiss on him when she’s done.

ANDRE CHOOSES THE LESSER OF TWO EVILS | Andre reaches his own moral crossroads when Lucious basically asks him to pimp himself out to the Deputy Mayor with whom he used to canoodle — this time to get Freda’s gang charges dropped. Unfortunately for the eldest Lyon son, his paster has a barely concealed agenda, too, telling his mentee that “God has chosen you to be his warrior” and pushing him to do “repugnant” things if it serves their larger goal. (I half expected the dude to hand Andre a CD of his original tracks and ask for help scoring a deal!) Andre decides against sleeping with Alvarez – blackmailing her instead with iPhone footage of their prior twists. For the most morally conflicted fella on the show, it’s a win… I guess? On the plus side, his ability to resist Alvarez’s charms sends him gleefully back home for some afternoon delight with Rhonda, who’s been praying for some of that good Lyon lovin’! See? Even murderer’s prayers come true sometimes!