Damien Darhk is aiming big – or in this case teeny-tiny – by taking a miniaturized Ray Palmer captive in tonight’s Arrow (The CW, 8/7c).

“I think Damien has it out for everyone, to be honest,” Emily Bett Rickards says of the kidnapping. “He’s like, ‘Well, this is going to be my town, and I’m just going to kill anyone in my way.'”

As for Ray’s ex, Felicity finds herself thrown for a loop after getting the huge news that her former boyfriend and colleague is not so dead after all.

Especially in the wake of recent events (see: Lance, Sara), “There’s this idea that life isn’t exactly going to be everything that you thought you were given, and death isn’t exactly permanent anymore,” Rickards observes. “That is really hard to struggle with, but also just being forced to accept it is really hard. Felicity comes into that knowledge, the possibility of Ray being alive, and just runs with that because she doesn’t have any other choice.” 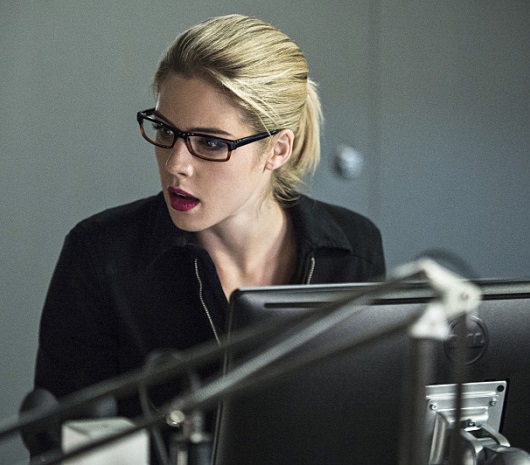 Viewers in turn will see a “neurotic” side of the tech wiz as the need to figure out Ray’s specific situation overtakes her. “She’s still Felicity in a sense that she’s still kind of bubbly,” her portrayer shares, “but there’s this energy that I don’t think we’ve seen in her before that’s just super-focused and very wired.”

When Team Arrow does come to Ray’s rescue, they will be “shocked [and] intrigued” to “see him tiny,” Brandon Routh previews. But by then, “There’s not a lot of time to even discuss or give hugs. It’s just kind of like, ‘Oh hey, you’re alive. Let’s go! Now we need help.’ So I think everyone’s happy to have Ray back. I think.“

Returning himself to full-size is hardly the end of Ray’s worries, however. He still has to deal with “what he comes back to, the state of his company, the state of his life, the city,” Routh says. “‘Did he have impact or did he not?’ is his journey. Processing all of that is all part of the shift of his being gone and coming back” — and perhaps moving on, since Tomorrow is another day.