If you tuned into the Fox Business Network during the first half-hour of Tuesday’s Republican Presidential Debate, no one would blame you for thinking you had the wrong channel.

Considering how quickly the three previous GOP debates have devolved into insult slingfests among the candidates, it was refreshing (if not totally puzzling) to watch the first 30 minutes of Tuesday’s panel unfold with civility and productive discussion.

OK, maybe I’m being a little too generous. The debate’s opening half-hour wasn’t without its eyeroll-inducing moments, particularly when, nine minutes into the event, Florida Sen. Marco Rubio spoke up in support of vocational education, insisting that “welders make more money than philosophers. We need more welders and less philosophers!”

And let’s not forget when, a few moments later, former Florida Gov. Jeb Bush — who had thus far not been asked a question — took great offense to being interrupted by Ohio Gov. John Kasich. “I had about four minutes in the last debate. I’m going to get my question in!” Bush asserted, making us all wonder, “Jim Webb, is that you?“

But it wasn’t until the second quarter of the debate when things really got heated, confusing and totally chaotic — in other words, par for the course. Although the two-hour event didn’t have quite the same amount of fireworks as past GOP face-offs — we all collectively zoned out during Texas Sen. Ted Cruz’s monologue on big banks, right? — it wasn’t without its highlights, which we’ve detailed below:

SASSIEST FOLLOW-UP FROM A MODERATOR | After Kasich spent his allotted 90 seconds only vaguely outlining his plan to balance the federal budget, co-moderator Maria Bartiromo immediately retorted, “Do you want to name any specific steps, sir?” #MicDrop 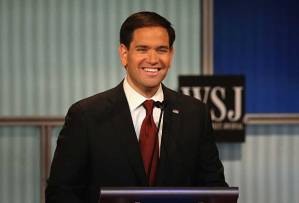 MOST REPETITIVE RESPONSE | In case you had any doubts, Donald Trump still really wants to build that wall to keep illegal immigrants out of America. “We will have a wall. The wall will be built. The wall will be successful,” Trump asserted when the issue of immigration reform was raised. “And if you think walls don’t work, all you have to do is ask Israel. The wall works. Believe me.”

MOST POLARIZING ANSWER | Though most candidates earned cheers from the Milwaukee crowd on the topic of immigration, Cruz seemed to leave some audience members scratching their heads as he addressed the economic importance of immigration reform: “Immigration is a very personal economic issue. The politics of it would be very different if a bunch of lawyers or bankers were crossing the Rio Grande, or if a bunch of people with journalism degrees were coming over and driving down wages in the press.” (We at TVLine resent that!)

MOST AWKWARD MOMENT | Even though China is not currently involved in President Obama’s Trans-Pacific Partnership free-trade deal, you could have crafted an entire drinking game around the number of times China was mentioned in TPP discussion — something that was not lost on Kentucky Sen. Rand Paul. “Hey, Gerard,” Paul called to co-moderator Gerard Baker, “We might want to point out that China’s not part of this deal.” Paul’s statement took Baker by such surprise that, instead of tossing to a commercial break, the Wall Street Journal editor-in-chief spoke right through the outro music to clarify his point — rather clumsily, might we add.

BEST “SICK AND TIRED OF HEARING ABOUT YOUR DAMN E-MAILS!” MOMENT | Though neurosurgeon Ben Carson didn’t exactly take a deep dive into his disdain for the media, he did take a winning approach to the question of how recent negative media exposure is affecting his campaign. “Thank you for not asking me what I said in the 10th grade,” he said to co-moderator Neil Cavuto. “I appreciate that.”

SILLIEST SPAR | Just as Kasich and Trump began their tradition of talking over one another to make a point, Trump fired back, “You should let Jeb speak.” (Bush’s response? “Thank you, Donald, for allowing me to speak at the debate. What a generous man you are.”)

MOST OBVIOUS INDICATION THAT THE AUDIENCE WAS REPUBLICAN | “If Hillary Clinton is the Democratic nominee,” Bartiromo told the hopefuls on stage, “you will be facing a candidate with an impressive resume.” Cue laughter and boos from the crowd — and a hearty chuckle from Rubio, who began his response to the what-makes-you-better-than-Hillary query with, “That’s a great question, and let me begin by answering it.” (Yes. That would be good.)

CANDIDATE MOST DESPERATE TO HAVE THE LAST WORD | Never mind that Cruz wasn’t actually asked the Clinton question. He tossed in his two cents anyway: “And Maria, I will note, [Hillary]’s got a lot of experience, but her policies have proven disastrous… Hillary Clinton is the embodiment of cronyism in the government.”

BEST WINK-AND-NOD | On the heels of multiple candidates plugging their personal campaign websites, Rubio took advantage of a tongue-in-cheek moment to do the same in his closing arguments. “Tonight, I ask for your vote, and I ask you to join us at my website, MarcoRubio.com,” he said, earning cheers and applause from the crowd — and a smile from Cavuto!

Did you tune in to the fourth GOP debate? What moments stood out? Hit the comments with all of your thoughts!