“Dawsey” ‘shippers, there’s a rainbow behind that dark cloud that’s been hanging over the Chicago Fire lovebirds as of late.

While Dawson and Casey lost their baby, Tuesday’s episode made it clear that the couple is committed — even if it’s not in the family way. So rest assured, there will be no breaking up any time soon!

“It’s a bit of a reset for their relationship,” executive producer Matt Olmstead says. “They’re still a couple, and we have storylines coming up that are going to further galvanize them as a couple. But this isn’t the beginning of the end for them because of what happened. It brings them together more closely.”

Below, Olmstead and the cast preview the emotional road ahead for “Dawsey” and discuss the other big highlights – surprise smooches! firehouse conflicts! – from Tuesday’s episode.

LIVING WITH LOSS | Dawson and Casey will be dealing with the loss of their baby in different ways, Olmstead says. “One of her coping mechanisms is, ‘Thankfully, I have a job that I can put myself into,’ like a lot of people do,” he shares. “So [Casey is] hovering a little bit, letting her do her thing. He lets her go through her process and is there for her at the end.” Star Monica Raymund hopes that “Dawson might become a little more internal the way that Casey is,” the actress says. “I’m very curious to explore that side of her. Right now, she’s a very strong woman, very outspoken, very expressive. It might be interesting post-baby, [if she was] a little bit more subdued and a little bit of a darkness comes over her.” Adds leading man Jesse Spencer: With all that the couple have gone through recently, “we’re still leaning on each other. We haven’t got to the lighter stuff yet. Me, personally, I’m looking forward to it.”

A HOUSE ON FIRE | With Riddle having it out for Chief Boden and his crew, troubles will continue to plague 51’s finest in the weeks to come. “We still have a couple of episodes ahead of that conflict because Severide still hasn’t gotten his lieutenantship back,” Olmstead reveals. Meanwhile, the new captain Patterson “looks like he’s playing both sides of it a little bit. So we take it to its crescendo in a couple episodes. Hopefully, everything works out for those involved.” Until then, Severide is faced with a choice: “‘Do I play dirty to keep my job and potentially ascend? Or do I stay true to myself and potentially get knocked back?'” the EP describes. And Gabby won’t be taking Riddle’s attacks sitting down. “She’s going to go ahead and start investigating,” Raymund previews. “You know Gabby – she puts her nose where it’s not her business. She’s going to start trying to do what she thinks is best for the chief and the house because we are one, we are one Chicago, we are one family. So when one of us is down, that means all of us are down. She’s going to fight to the end to protect her family.” 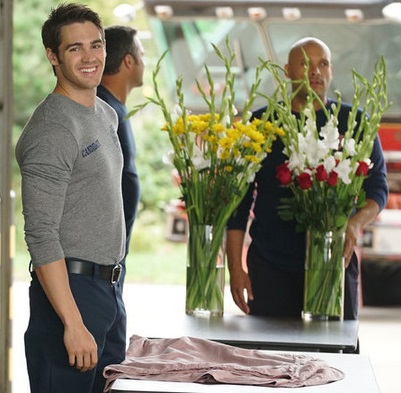 A NEW ROMANCE | After much flirtation, Chili and newbie candidate Jimmy locked lips – and will continue to do so. “I’m going to kiss him a lot,” Dora Madison says with a smile. “We’re like a couple of puppies. We’re always like [cuddling].” But given their different views on marriage – he’s for it, she’s not – are these two even the right fit for one another? “The fans won’t be disappointed,” Steven R. McQueen maintains. “What do they say – opposites attract.” However, “we’ll see how the job takes a toll” on the young lovers, co-star Kara Killmer shares. Adds Madison: “[We explore] what their differences are. I think Jimmy is a little more [square] than Chili is. Maybe she’ll make him more fun.”