THE PERFORMANCE | On a TV landscape littered with Black Canaries, Mockingbirds and other badass women, it’s 61-year-old Floyd Gerhardt who has us shaking in our shoes, courtesy of three-time Emmy winner Smart.

In the opening weeks of the FX series’ second season, we saw hints of Floyd’s formidability as the Gerhardt crime family matriarch, newly thrust as she was into a position of leadership after husband Otto’s stroke. But it was when she sat down to present a “respectable” counteroffer to Kansas City, the syndicate fronted by Joe Bulo (played by Brad Garrett), that Smart took revelatory dialogue and crafted a compelling picture of one tough mother.

“I dunno, maybe when you look at me you see an old woman,” Floyd started. Smart then leaned forward and shot a steely look across the table, as the mob mom detailed the hardships (three miscarriages, a son killed in Korea) she has endured. “The point is: Don’t assume that my back is weak and my stomach not strong…. Make no mistake, we’ll fight to keep what’s ours.”

Just as impressively, Smart showed Floyd’s softer side at episode’s end, first cradling her fearless son Dodd’s head on the drive home as she let signs of her own fear of fallout cross her face, wetting her eyes. And again, when comforting ailing Otto — before reclaiming her resolve and declaring to her clan their next move: “It’s war.” 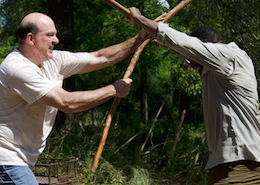 HONORABLE MENTION | When The Walking Dead’s Morgan refused to kill the Wolves who were slaughtering the residents of Alexandria, we were beyond certain that nothing could possibly justify his rigid (and potentially fatal!) stance. Then came “Here’s Not Here” and John Carroll Lynch’s crucial one-off appearance as Eastman, the droll and earthy post-apocalyptic shrink who brought Morgan back from (over) the edge of madness with aikido and its challenging “live and let live” credo. So heartbreaking was the widower’s cautionary tale of unfulfilling revenge — and so earnest was his portrayer, American Horror Story: Freak Show’s erstwhile Twisty the Clown — that we were left with no choice but to understand why Morgan couldn’t bring himself to do unto the Wolves as they so happily would have done unto him. In the end, Eastman turned out to be too good a man to last. But the impression that he made — and Lynch right along with him — sure will. 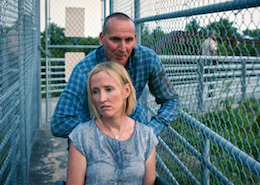 HONORABLE MENTION | With his unresponsive, wheelchair-bound wife and his religious zealotry, The Leftovers’ Matt has never exactly had an easy time of it. But even his unshakable faith was tested by the calamities that befell him in “No Room at the Inn.” As the reverend careened from jubilation (over Mary’s surprise pregnancy) to indignation (at the implication that she hadn’t “returned” to consent to intercourse) and finally desperation (as he found himself unable to get the missus and their unborn child back into Miracle), Christopher Eccleston opened a window to Matt’s feelings through which we almost didn’t want to look, they were so painful and exhausting. As the episode ended, though Matt didn’t seem to think that he’d earned a break — he’d replaced a man who’d been shackled in the tourist trap just outside of Miracle — we were convinced that his portrayer had at the very least earned an Honorable Mention. 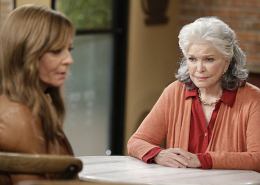 HONORABLE MENTION | Even if Ellen Burstyn hadn’t had a single line of dialogue in this week’s Mom, her eyes could’ve told you everything you needed to know about her character Shirley’s journey to reconnect with the daughter she’d abandoned to foster care. Coming face-to-face with Allison Janney’s Bonnie after some five decades apart, Burstyn froze in her spot, and expertly allowed waves of shock, regret and even a hint of joy to wash over her. That complex tapestry of emotions, however, gave way to unfiltered shame when Shirley finally confessed that she hadn’t come back for Bonnie once she’d gotten back on her feet because she’d ended up with a man who “said he didn’t want any kids around.” In a later scene, as the women parted ways — likely for the final time — Shirley opened her arms and made one last desperate request for a hug, one that Bonnie promptly (and understandably) rebuked. This broken old woman had received Bonnie’s forgiveness, but the haunted resignation on Burstyn’s face let us know that alone wasn’t enough to make her whole.