Thursday’s Vampire Diaries formally reunited Alaric with (the body of) the love of his life, and it turns out her portrayer was just as surprised by Jo’s revival as most of the CW drama’s fans.

“I got the call telling me I was on hold for such-and-such a date to go back, and my jaw dropped,” Jodi Lyn O’Keefe tells TVLine. “I was like, ‘I’m not the only one to stay dead on this show? Yes!'”

Below, O’Keefe discusses playing dead during her first day back on set, her new approach to portraying Jo (but also not Jo) and what we can expect from her character’s journey of self-discovery. 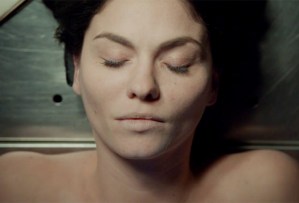 TVLINE | Let’s start with that first episode in the morgue. What are your fond memories of filming those scenes?
It was really hard not to laugh, especially when Ian [Somerhalder] was around, because he and I had a couple of really funny moments when I was dead. I was on that slab for a couple of days, so it felt like I was dead forever. There was a lot going on while I was lying there with my eyes closed, and the first thing I did was come in and ask everybody, “You guys got your words memorized? I got mine.”

TVLINE | Jo’s only been dead for a few episodes, yet so much has changed in that time. What are your thoughts on all these new developments?
Everything’s a lot darker, which I love. It seems a lot more intense, and I’m loving the trips through time — the flash-forwards and flashbacks. It’s really interesting to see what’s happening to these people as they’re all sort of unraveling. I love the direction they’ve taken the show.

TVLINE | And how has your approach to playing Jo changed, now that she’s… not really Jo?
Really, I just went with the amnesia. Regardless of who or what this is inside Jo, she doesn’t know anything. So it’s a clean slate at the moment, which is really kind of nice, because you get to discover who she is as you go along.

TVLINE | Do you even refer to her as Jo? Caroline Dries called her ‘Faux Jo’ the other day, and I like that.
[Laughs] I really like that, too. I’ve been calling her many things, but Faux Jo’s been one of them.

TVLINE | At any point, did they tell you who’s inside Jo?
Yes, finally. They like to hold information from us. Everything’s on a need-to-know basis, but I do now know who’s in her body. … That sounds bananas, by the way. What a statement. 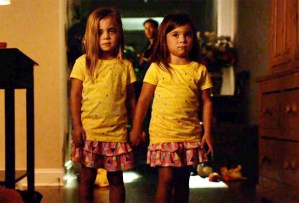 TVLINE | And how did you feel when you found out Alaric has twins in the future?
I was so excited, I can’t even tell you. I met [the twins] with Matt Davis last year and they really do look like us, so I was like, “Oh, God, this is the greatest thing ever.”

TVLINE | Generally speaking, what can we expect from Jo in the coming weeks?
Self-discovery, and a lot of it. She’ll be figuring out who she is and where she came from and what’s happening. It’s like a baby being born.

TVD fans, what are your thoughts on Jo’s return? Any theories about who/what might be inside her? Whatever’s on your mind, drop it in a comment below.