“Christmas” came early on Thursday’s The Originals, bringing with it gifts of crushing heartbreak, game-changing reveals and… a false arrest?

Executive producer Michael Narducci spoke with reporters about how this week’s biggest twists will impact the residents of New Orleans moving forward, but first, a quick recap:

* Cami was arrested for the recent string of handsome-man murders. (She’s innocent!)
* Hayley and Jackson continued to work for Davina as her personal bodyguards, earning their freedom.
* Aurora’s vampire origins were revealed: She tried to kill herself back in the day, which forced Rebekah to use her blood to save her. So she killed herself again — this time with vampire blood in her system — and was reborn.
* We also learned that Aurora told Elijah that Klaus killed their mother. (Oops?) 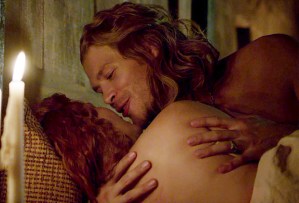 EX-GAMES | Fear not, lovers of insanity — the madness inspired by Aurora’s return has only just begun. “She’s kind of like the ex-girlfriend from hell,” Narducci says, adding that “she sounds perfect for Klaus.” That said, those two aren’t the only ones with history. “We’ve found out there’s a great sin from Elijah’s past,” Narducci adds. “Maybe Elijah has stood by Klaus’ side for all these centuries because of a sense of guilt. Maybe the noble, beautiful, honorable Elijah has some chinks in his armor.”

REBEKAH’S RETURN | Narducci says we’ll be seeing Rebekah in present-day New Orleans “very soon,” but refused to confirm whether she’ll be portrayed by Claire Holt or Maisie Richardson-Sellers. “I love both of those amazing actors, and we’re fortunate enough that we have a storyline that will have to resolve Rebekah in Maisie Richardson-Sellers’ body and pick up with what’s going on with the original body, as well. In not too long, you’ll understand how that’s going to play out.” 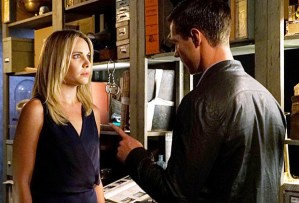 CAMI BEHIND BARS | Still reeling from Cami’s arrest? Well, don’t relax just yet. “We’re going to see the effects of Cami being arrested and her room full of dark objects being discovered by the police,” Narducci teases, adding that the discovery “might play a larger role into what the mastermind villains are up to in terms of how they want to deal with the Mikaelson family. … Things are going to get a lot worse a lot more quickly for her.” And for all you faithful Klaus/Cami ‘shippers: “Eventually, and inevitably, [Klaus] will be concerned very much for what has happened to Cami.”

THE FUTURE OF ‘HAYLIJAH’ | Let’s start with the good news: When it comes to Hayley and Elijah’s relationship, Narducci can assure fans that “nothing is ever finished.” That said, Jackson also “loves her and wants to be a good husband to her.” So what’s next? “Hayley’s going to find herself in the difficult decision of having to choose between this man she married, who is now her family, and the father of her daughter and the brother of the father of her daughter. That’s an impossible place to be.” Narducci also says that Episode 6 ends with “the most chilling and the most romantic and the most sexy, but also the most horrifying, ending we’ve ever done.” Could that be Hayley-related?

DAVINA DIVIDED | The most powerful witch in town will remain a hot commodity in the coming weeks, as “there are people who want her on their team, and they might not be the best people,” Narducci explains. But she also hasn’t forgotten the reason she became Regent in the first place: to resurrect Kol. Adds Narducci, “Has she given up on bringing him back? I don’t think we should give up on that drive.”

PROPHECY HIJACKERS | Could alleged enemies Lucien and Tristan be — gasp! — working together? It’s entirely possible, according to Narducci, who says the duo’s desire to survive might just overpower their differences: “These vampires understand a prophecy has been delivered that the Mikaelsons are going to die. [They’re thinking], ‘Even though we have strife between us, the danger is that we’ll be wiped out when our sires are wiped out. Let’s put aside our differences and find a way to hijack this prophecy and make it work out in our best interest.”

Your thoughts on Klaus/Aurora and the rest of this week’s Originals? Drop ’em in a comment below.