“Cowboy, Take Me Away” isn’t just a hit by the Dixie Chicks, it would also make a really good alternate title for Season 2, Episode 6 of Empire.

Except, this isn’t a story about sleeping on a pillow of bluebonnets, in a blanket made of stars. Nope, the subjects of this tale have longhorn bulls crudely tattooed between their shoulder blades — and their undercover leader, Adam Rodriguez’s Laz Delgado, hasn’t just infiltrated Lyon Dynasty records, but also Cookie Lyon’s heart. 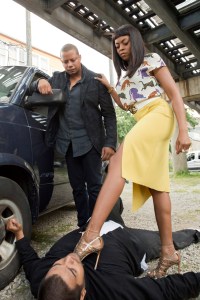 You know when our girl eventually figures out that Laz was the one behind Hakeem’s abduction and brutalization, she’ll make her usual broom-to-the-head/Louboutin-to-the-throat techniques look like butterfly kisses. Oh, and she’s absolutely, positively going to call him “bitch.” (The only question is how many times she’ll drop the b-bomb on his lying, sorry ass.)

But until that delicious comeuppance arrives, let’s recap the action from “A High Hope for a Low Heaven.”

HAKEEM’S BACK… OR IS HE? | Lucious and Cookie negotiate Hakeem’s release from his captors using $40,000 in cash, but the traumatized youngest Lyon takes his busted-up eye and badly damaged psyche right to the door of… Boo Boo Kitty! He kisses her like he’s trying to prove his manhood, and it leaves me wondering if he endured sexual assault during his captivity. (Am I overthinking here, or did you have that sudden, horrifying thought, too?) Back at Lyon HQ, he blames Lucious and Cookie for what happened to him, though if they’re to blame for the fame that’s put a target on his back, shouldn’t he also thank them for that fame in and of itself?

Hakeem spirals into an almost hallucinatory state as he rehearses for a big performance with his Latina girl group, but behind the scenes, Lucious is negotiating with Cookie to let his son come back to the Empire label — although she’s not invited along for the ride. “You ain’t a boss, Lucious. You a busta,” she seethes — but silently concedes he’s a busta with good wine, since she exits not only with her ex’s glass, but also his whole damn bottle. (Note: Lucious couldn’t even try to question the Lyon Matriarch’s boss status — not with an exit like that.) 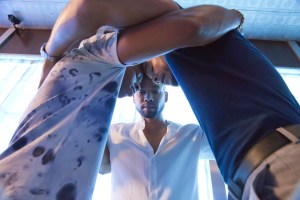 At ex-cop Laz’s suggestion, Cookie sets up a meeting with the kidnappers, with the prospect of hiring them as security detail or at least paying them off — and figures she can kill two birds with one stone by bringing along Hakeem to rebuild his confidence. It all goes sideways when Hakeem pulls a gun and threatens to shoot — but Cookie pretty much stands between him and his targets, pleading, “I’d rather die than lose you again!”

Lucious makes one more play for Hakeem’s soul, offering him a hot new track called “Boom Boom Boom Boom” — but his son promptly rejects it. “With you there’s always strings — or ropes that choke,” he huffs. In the end, it’s Jamal and Andre who rally Hakeem’s spirits, telling him they wouldn’t have fought back, either, and that his life was worth far more than his street cred. Group hug? Well, let’s call it a huddle and note that it’s nevertheless moving.

DESTINY’S PROBLEM CHILD | Yep, that’s Cookie’s nickname for Mirage a Trois, as she helps them prepare for their breakout moment at Big Apple Jam. On the big night, though, Hakeem freezes up at the sight of Lucious’ taunting face in the audience, and it’s Laura who pulls him out of his haze with a next-level vocal sung directly to his face. Later, when Anika shows up at Hakeem’s apartment, she finds he’s having a “boss-level celebration” — and she’s not invited. Ouch! 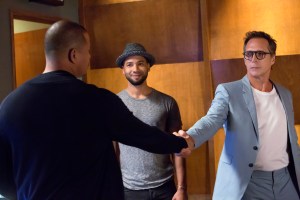 JAMAL’S NEW BENEFACTOR | Meanwhile, Jamal’s working on a track called “Delta John to Alpha One” (aka the best damn thing he’s delivered in all of Season 2) and getting frustrated that the Staples Center rejected him for a tour date on account of being “too narrow of an artist.” He knows it’s code for “gay” and brings in his father’s old enemy Jameson Henthrop (William Fichtner) — a gay, David Geffen mogul type — to help turn his marketing fortunes around.

FRIDA’S JUST ANOTHER WORD FOR NOTHIN’ LEFT TO LOSE | Andre has an epiphany (apparently backed by hard numbers) that Empire’s Ghetto Life division should be a Christian label — bad news for the artists he’s planning to drop, but good news for Becky’s illicit love J. Poppa, who warms to the idea like a nun hearing Handel’s “The Messiah” at Christmas. The one artist Lucious says absolutely cannot be cut is Frida Gathers — despite the fact that she ends an awe-inspiring performance at Leviticus by kicking the face of a heckler. Lucious tracks her down, tells her he relates to her more than his own sons (ouch, dude!) and then offers her “Boom Boom Boom Boom,” to which she adlibs with raw fury and a dose of humor. The girl is seriously good.

COOKIE MIGHT NEED HELP WITH HER MATCH.COM PROFILE | Cookie ends the hour by showing up at Laz’s house and finally giving in to his open flirtation. “Make me forget everything that happened this week, Laz,” she sighs, falling into his arms as “Boom Boom Boom Boom” not so subtly plays over their makeout session. But when dude takes off his hoodie, it’s not a case of sexy “Damn!” it’s more of an uh-oh/oh-no “Damn!” He’s got the same tattoo as the gang members who kidnapped her son!

What did you think of this week’s Empire? Did you suspect Laz had ulterior motives? Sound off below!