This Tuesday on The CW’s The Flash, the “other” Harrison Wells caused double takes, Dr. Light gave one Central City resident an eyeful, a closet metahuman got outed and Barry had a super-sparkly “blind” date.

So that explains why I couldn’t find any casting for Dr. Light. But because I turned up nothing, I suspected a twist was at play — though this one still was surprising.

Following a prologue that hinted at friction between Wells and Jay Garrick on Earth-Two, our Team Flash got to know the “other” Wells, whom Cisco labeled a “dick” and preferred to dub “Harry.” Wells/Harry said he came over to help stop Zoom, a “plague” that he created and who is determined to be the only speedster. As Wells makes the rounds he raises several eyebrows, drawing gunfire from Joe and freshly gut-punching the likes of Iris, who after all lost Eddie to his “evil” doppelganger.

The arrival of another “breacher,” a female Earth-Two thief nicknamed Dr. Light, gives Wells the idea to lure Zoom out by capturing his latest emissary. Once Barry comes face to face with the meta, though, he realizes that it’s CCPN reporter Linda Park’s own counterpart!

Suspecting that Dr. Light is there to kill our Linda, Jay and Caitlin hold a stakeout outside CCPN, where he prettttty much namechecks Aquaman and the two are about to get kissy-kissy before the blinding baddie sneaks up on them and races inside to find Linda. 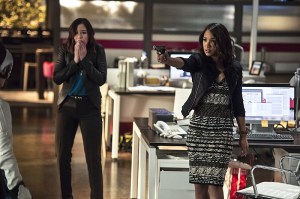 Badass Iris, though, saves her gal pal’s life by wielding the gun Joe slipped her earlier and shooting the visor off their attacker. Light, though, kills the ladies’ senior editor before running off.

All this time, Barry was braving a first date with Patty, even though his earlier run-in with Dr. Light left his vision highly impaired, But thanks to some remote guidance from Cisco (via a camera hidden inside glasses that probably didn’t need such conspicuously dark lenses), Barry charmed Miss Spivot — though the comely detective did deduce that he was unable to see her. With that ruse out of the way, sparks flew between the two, especially after some hand-holding and a goodnight kiss (…or two) — before they both got summoned to the CCPN crime scene (though Patty apparently stopped to change clothes?).

Afterward, Wells rails at Jay, blaming him for Zoom’s reign of terror, claiming that Zoom hunted the Crimson Comet and not the other way around, that Earth-One’s Flash runs toward danger whereas Jay runs from it. The Earth-Twosome slug it out until Barry breaks things up. Wells then gets the idea to use Dr. Light’s visor to locate the breacher — or more specifically, for Cisco to use the powers he has been concealing! For as Wells reveals to all using his metahuman-sensing wearable, Cisco is in a meta!

Cisco is unable to activate his power, not until Wells jabs the visor at his chest, reminiscent of how our Wells/Eobard reached in and crushed his heart. Cisco then is able to “see” Dr. Light at the train station. Barry dashes there and, at Wells’ suggestion and with encouragement from Jay, goes fast enough to create a “speed mirage” of himself, confusing Light’s aim until he can blindside her.

Back at S.T.A.R. Labs, Jay politely declines to help Barry & Co. battle Zoom — and warns them again about this Harrison Wells before leaving. Later at Jitters, Cisco gets barista Kendra/Hawkgirl’s phone number… and then his own nickname, which is suggested by Barry and seconded by Caitlin — “Vibe” — as Wells secretly looks on.

A final coda takes us back to Earth-Two, at a time where Zoom apparently has kidnapped Wells’ daughter….

What did you think of this week’s episode of The Flash?