Could Liv and Major’s passionate liplock at the end of last week’s iZombie (airing Tuesdays at 9/8c on The CW) be just the thing to save the spiraling former social worker?

“If there was any way of him getting back to that guy he was, it’s going to take something like connecting with Liv and being reminded of that,” star Robert Buckley says during TVLine’s visit to the show’s set. “Sometimes, you find yourself in your previous relationships, or you’re reminded of something you had or who you used to be.”

Although things appear to be on a upswing for Major, at least romantically, he’s not out of the woods yet. There’s still those zombies he’s been offing and disposing of for Max Rager, which could raise some flags if the authorities ever catch wind of them.

“Major’s already under investigation by the Seattle PD” for his involvement in the Meat Cute killings, Buckley points out. “Let’s not forget that Clive, like a dog with a bone, is not letting it go. So he’s in an incredibly dicey place.”

Adds executive producer Diane Ruggiero-Wright: “He’s going to have a dark and interesting path. It’s different from the path that he went on in the first season. It’s a surprising road.”

Read on for scoop about Clive’s home life, Ravi vs. Blaine and more. 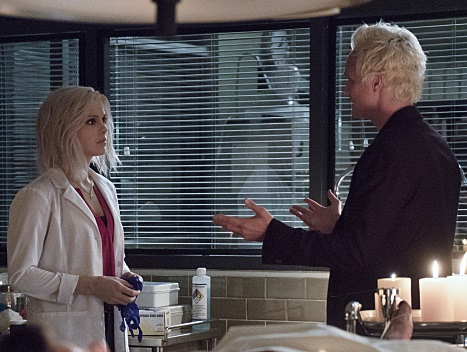 STRANGE BEDFELLOWS | As we previously teased, a common enemy will force Liv and Blaine “to band together as zombies,” Ruggiero-Wright says. The two are foes themselves, but star Rose McIver says the show’s writers crafted the storyline “so cleverly and made it work in a way that Liv just completely needs [Blaine’s help]. She relies on him… It’s an interesting dynamic. It’ll be a lot of fun.”

BEHIND THE BADGE | An upcoming hour will reveal “insights into Clive that I find endearing and heartwarming,” Ruggiero-Wright previews. Adds his portrayer Malcolm Goodwin: “You learn a lot about who he is. There was so many cool talents” – like cooking! – “that he had that I didn’t know about… It felt like a love letter to Clive.” The episode will also bring the detective, Liv and Ravi closer together, Goodwin says. 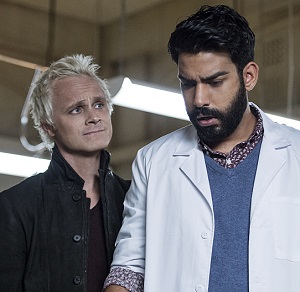 ZOMBIE SCIENCE | In other unlikely duos news, Ravi’s “work with the cure, the tainted Utopium, puts [him and Blaine] in the same world,” Rahul Kohli describes. “And Blaine is very much his guinea pig in the sense that he has no idea what’s going to happen down the road.” We, however, have a pretty good idea of what the partnership will look like: “Ravi and Blaine square-off… Stunts were involved,” Kohli teases.

iZombie fans, which storyline are you looking forward to most?