This Tuesday on ABC’s Agents of S.H.I.E.L.D., the “human” identity of the Inhuman monster known as Lash was revealed — to the surprise of mayyyybe 10 percent of TVLine commenters?

Spooked by what she saw two episodes ago during the transpo van ambush, Daisy was determined to get to the bottom of the beastly Inhuman’s alter ego. Figuring that it’s someone on the inside who could find out the van’s route, Daisy and Coulson first targeted ATCU boss Rosalind Price’s No. 1, Luther Banks.

Daisy, Hunter and Mack tailed Banks, but Hunter got impatient and approached the guy in broad daylight — though while wearing a bandana! — and iced him. Then when Daisy needed a blood sample, Hunter slugged the guy good, before depositing Banks’ body back in his car.

Later, though, Simmons reported back to Daisy that Banks’ blood test came back negative, that he us as human as they come. So, a dead end on that front.

Lash’s identity would come out, though — via a separate storyline, as May and Bobbi tracked the Von Strucker kid with the hope of getting a bead on Ward’s latest location. After fleeing the convenience store assault on Andrew, Werner had found himself hiding out with a power player named Gideon, who is not afraid of Ward. When May and Bobbi stormed that location, and after many goons were felled, May found Werner bleeding out.

With his last breaths, 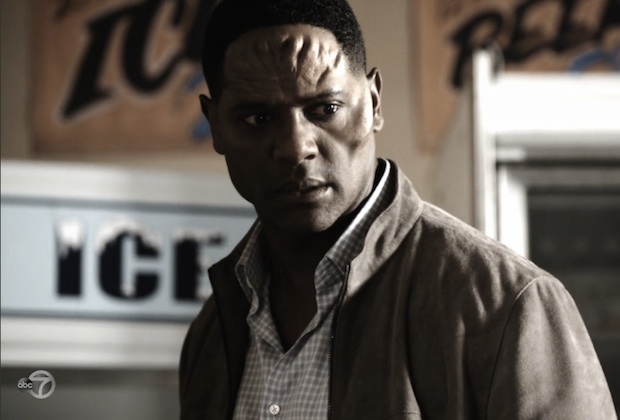 the kid didn’t reveal Ward’s whereabouts but instead related the surprising story of the attack on Andrew — which did not unfold as May’s ex claimed. Rather, Andrew transformed into Lash during the skirmish, before scaring Werner off and setting the place ablaze.

Needless to say, the news left May all :-O

At episode’s end, on the Bus, Andrew checked in with Daisy, who had just wrapped an untraceable call with Lincoln. The Secret Warriors’ resident shrink was quite curious about that Inhuman’s location, but Daisy couldn’t help him out.

Elsewhere in the episode: As indicated above, May is back and Bobbi is back in action. Also, Rosalind gave Coulson the 10-cent tour of the ATCU’s holding facility for Inhumans, who are placed in a “stasis” gel. (The two covert bigwigs also flirted up a storm.) And Fitz went about helping Simmons hopefully retrieve Will from the planet, though his first simulations on using the portal came up empty.

What did you think of the Lash reveal?