CBS amid much fanfare last week introduced us not only to Kara Danvers aka Supergirl (played by Melissa Benoist) but also the Kryptonian general who’s not about to let family ties stand in the way of her ominous plan for Earth.

For in the final seconds of the pilot, it was revealed that Tony Award winner Laura Benanti (Nashville, The Playboy Club) is recurring in a dual role, as both Kara’s mother Alura (seen in flashback and via hologram) and the aforementioned “embittered” aunt Astra.

Heading into Episode 2 (airing Monday at 8/7c), Benanti sheds a bit more light on her dark alter ego and her surprising agenda, as well as denotes the different between touching down like a boss versus The Boy Who Won’t Grow Up.

TVLINE | Tell us a bit about Astra….
I never know how much I’m allowed to say, because she’s a pretty complicated and layered character. What I can tell you right now is that she is Alura Zor-El’s twin sister, who was obviously sent to Fort Rozz by her sister. I can’t tell you why and I can’t tell you what she’s been sent to Earth to do, but I can tell you that I punch a lot of people in the face.

TVLINE | Well, we like face-punching. Did you have any kind of previous fight training going into this?
No! [Laughs] Not at all. Like, two days before the fight scene the fight choreographers were working with me, they had me flying and landing — and they kept saying, 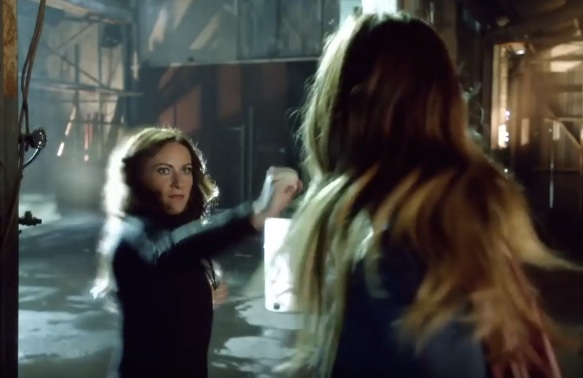 “A little less like Peter Pan and a little bit more like you’re scary.” The same thing with my punches — “You’re not dancing, you’re punching somebody.” So, yeah, it took me a while to sort of get into the grittiness of it, but it ended up being really fun and looking really cool.

TVLINE | I was thinking about that while watching Episode 2 because obviously there’s “fight choreography,” and then there’s “midair, hanging from the rafters on a fishing line fight choreography.” But that’s not you up there, is it?
That actually is my stunt person, Mallory. I’m never hanging. What we did do is Melissa and stand on this platform which they then move around and they blow wind on us in front of a green screen, so it looks like it’s us up there. Does Episode 2 look cool…?

TVLINE | Oh, yeah. And I see what you mean about sticking the landing — you look fierce, no Peter Pan.
Oh, good. What they do is just magical. It’s fascinating.

TVLINE | What I found interesting in Episode 2 — and I don’t think this is a spoiler, but more falls under the category of “intriguing” — is Astra claims she is there to “save” Earth. Though I have to wonder if that is just spin.
She really is. Or she believes she is. She thinks she knows the best way to save Earth.

TVLINE | And she’ll elaborate on that at a later date…?
Yes…. She will….

TVLINE | How excited were you to do this show? Because this is so different from anything you’ve done before.
So excited. This is so different from anything I’ve done. And I love that Greg Berlanti, who I’ve known forever, since I worked with him on Eli Stone, thought of me for this. When he called me and offered me this job, first he pitched me Alura and I was like, “That sounds so nice and sweet. I can see why you thought of me.” And then when he was describing Astra, I was like, “That is really cool. I’ve never done anything like this!” It’s fun not only to do something new but also be seen in a different light.

TVLINE | And it was always one actress doing both roles? Because Fox’s Minority Report switched from one actor playing the twins to two.
No, they always wanted it to be one actress.

TVLINE | OK, because we see how that creates a weirdness for Kara a la “This is the Big Bad but, oh my gosh, she looks like Mom.”
Yes. “She looks like my mom and also she’s my aunt who I used to love.” So that’s really complicated for her. And I’m the only real family she has left.

TVLINE | Does Astra have any soft spot, any Achilles heel, other than kryptonite? Or is she just stone cold?
No, she has a soft spot…

TVLINE | Will we get flashbacks to the sisters, and see you acting opposite yourself?
Yes — which is the craziest and coolest thing to shoot ever. It’s so insane. I got to see a little bit of it and it looks amazing. Basically, when we shoot it, it’s a person standing off camera reading the other lines, and I act into the air. I’m not looking at anyone, which is awkward and weird. But I’m actually proud of myself, it doesn’t look like I’m acting into the air!

TVLINE | Is the nature of the sisters’ beef strictly, “You locked me up and threw away the key” or is there some “Mom loved you more” in there…?
I don’t know if I’m allowed to answer that. But we’ll get into that, their differences.

TVLINE | How would you describe the dynamic between Astra and Kara?
Certainly, in Episode 2, we see that Astra had been locked away on Fort Rozz for a long time. She’s had a lot of time to think, to become embittered, and to get really strong. I think that she is single-minded in her focus of what she has been sent to Earth to do, and she’s not going to allow anyone to get in her way of doing that — not even her niece, not even her family.

I also think she’s got a lot of anger towards Alura, and [Kara] is Alura’s daughter, so [avenging her] is sort of the next best thing.

TVLINE | On the flip side, it could be tempting to try and recruit Kara to the cause.
Of course! Supergirl’s very strong, so yeah, that will come into play for sure. But when we first see Astra in Episode 2, it’s as hard as we’re ever going to see her. Like, she’s hard as nails. And then when I come back, we get to see why she became that way. We get to see more layers.

TVLINE | Will Astra have any kind of a public face, like “billionaire industrialist Ashley Ashford,” or is she just skulking in shadows?
Skulking. [Laughs] It’s mostly skulking!

TVLINE | How about one last tease of what to expect?
The thing I would say about this show, which I really love, is yes, there are good guys and yes, there are bad guys, but they allow for there to be a little more grey. Instead of mustache-twirling villains and halos, we get to see the light and the dark in everybody.

Want more scoop on Supergirl, or for any other show? Email insideline@tvline.com and your question may be answered via Matt’s Inside Line.