For Halloween this year, CBS’ Hawaii Five-0 set out to scare up an especially fun batch of thrills and chills.

“We always do [a Halloween-themed episode] — the thing is, how do you do one that stands out?” asks showrunner Peter M. Lenkov. “Usually, we do one story, and here we did two sort of familiar stories but with our spin on it. We wanted to go all out and make this one more of an event.”

The pair of well-trod tales H50 riffs on tonight at 9/8c, directed as is tradition by Joe Dante (Gremlins), are Frankenstein and his monster, plus a stab at vampires.

The seemingly improbable first mystery is bright to life when McGarrett gets wind of random body parts found strewn around the island. Coming as they do from individual bodies, the obvious, ominous question becomes: What is being done with the bits that were not discarded? “Somebody’s keeping certain body parts, so you’re wondering: What is he building?” says Lenkov. “Max and ultimately McGarrett come 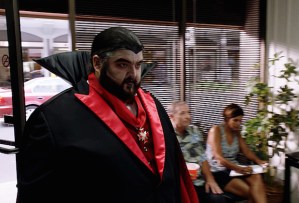 to the conclusion that they’re chasing a ‘Dr. Frankenstein'” in the form of a haunted widower with a “dark” agenda. “We tried to root this story in reality, as crazy as it is,” the EP says.

Elsewhere, a robbery at a blood bank invite spooky speculation — championed by Jerry, no surprise — that vampires are among us.

Danny meanwhile deals with his own kind of nightmare — as a teenage girl’s father — when his trick-or-treating date with still-hospiatlized Charlie is interrupted by the realization that Grace’s Halloween plans are not what they seemed.

“Grace sort of lies to her mom and goes to a party in the North Shore with a bunch of kids older than her,” Lenkov previews. “Danny goes to get her, and they then get 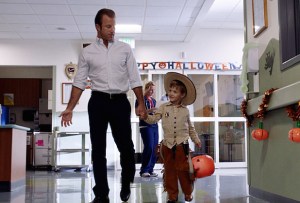 into their own little spooky adventure. In the end, it’s something that brings them closer together.” (And worry not, young Charlie gets a make-good on first-time trick-or-treating with his dad. Notes Lenkov, ‘The show works well when we wear our heart on our sleeve, so it has that kind of happy ending.”)

Surveying the Halloween outing’s many pieces, Lenkov says, “It’s a mix of everything — humor mixed with action mixed with the sentimental stuff. It’s scary when it takes itself seriously, but it is also funny in other parts. It’s 43 minutes I hope people can’t take their eyes off of.”