The demonic little princess goes straight for his nostrils, chips one of his veneers, bites down on his thumb with her razor-like teeth, all while Ash repeatedly smashes terra cotta pots into his own noggin in an attempt to dislodge her. With very little dialogue and no other human actors involved, it’s essentially a showcase for Campbell’s singular brand of cornball sparkle. He’s in on the joke, and even as he fights for his life, he’s winking through the screen to make sure the audience is, too.

For Cambell superfans, his charms might be all the fuel that’s needed to drive this weekly series. Those who want some sharply written zingers, intriguing characters or perhaps even genuine scares, however, might find Ash vs. Evil Dead is running on fumes by the end of its supersized, 45-minute premiere (airing Saturday at 9/8c). (Future installments will run 30 minutes apiece.)

This might be a good place to warn you that I hold no great affection for The Evil Dead, the low-budget 1981 splatterfest that started it all — and I wouldn’t argue too vehemently with you if you said, “Dude, you just don’t get it,” then headed down to the comments section to hack this review to bits with a chainsaw. But given that I absolutely, positively adore Drag Me to Hell, Raimi’s 2009 comic horror flick, I don’t think I’m completely outside the target audience for Ash vs. Evil Dead, either.

In any event, here’s the setup: Some 30 years after his last battle against the walking dead, we find Ash at his local saloon, using his wooden hand to pick up a comely stranger and give her the business in the women’s bathroom. Her cries of passion (“I’m coming!”) take a turn for the dark side when her face goes all zombified and she changes her tune to, “We’re coming for you!” Ash knows this is Very Bad News, but it doesn’t stop him from finishing what he started with his conquest, either, at least once she returns to human form. (Badum-bum!) 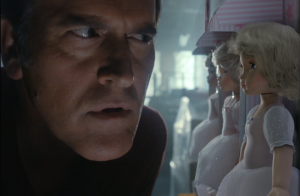 Turns out, a few days earlier, a verrrry stoned Ash tried to impress a poetry-obsessed hookup by reading her passages from The Book of the Dead, which fans of the movie know is Step 1 in causing a zombie uprising. Unfortunately for Ash, he can’t collect his Value Stop paycheck and flee town until he finishes his shift, which mostly involves sparring with his boss and dropping boxes of loose lightbulbs on the floor. There, his coworker buddy Pablo (who has a shaman uncle) and Pablo’s newly hired friend Kelly (whose dead mother has seemingly returned from the grave) discover what Ash already knows, leading to a climactic battle back at Ash’s trailer in which the trio are besieged by Ash’s comically grotesque old neighbor Vivian. (As Pablo and Kelly, Raising Hope‘s Ray Santiago and newcomer Dana DeLorenzo get little more to do than look on in awe at Ash’s zombie-slaying skills, and also get splattered with gore.) Ash’s chainsaw hand and Vivian’s bloody demise work as shock paddles to keep your interest alive even when Campbell has to deliver hammy one-liners like, “The other first thing I gotta do is some cardio — ’cause my heart is jackhammering like a quarterback on prom night.”

Meanwhile, we also get a subplot involving Det. Fisher (Girlfriends‘ Jill Marie Jones) losing her partner (and, temporarily, her badge) in an undead attack, then encountering a stranger in a diner (the always magnetic Lucy Lawless) telling her, “Sometimes what you think you saw is exactly what you saw.”

To me, Lawless’ line holds true of the entire Ash Vs. Evil Dead enterprise. Because as much affection as you might muster for the sight of Campbell returning to the role that made him famous, and as much giddy nostalgia Raimi delivers in the episode (calling back to the movie’s ground-level, entity’s-eye-view camera work and “things hidden behind sheets” suspense), the end product here is slight, and slightly stale. You just have to trust your eyes.

The TVLine Bottom Line: There are intermittent amusements in Ash Vs. Evil Dead, but an entire TV series can’t exist on Campbell’s soup alone.