Supernatural hosted a family reunion of sorts during Wednesday night’s Impala-themed hour when Sam had a vision of the younger version of his dad, as played by occasional guest-star Matt Cohen — except we found out it wasn’t really John Winchester telling him, “The Darkness is coming… God helps those who help themselves.” (As to who really appeared to Sam — could it be the holy deity himself? — that mystery lives on as the boys hunt.)

“It was fun for me to play that part of Sam,” star Jared Padalecki says during a recent visit to the show’s Vancouver set. “Sam’s not often really caught off guard like that. He’s been through a lot. He’s been to Hell and to Heaven and purgatory and he’s died and killed, so Sam’s not often caught totally off guard. So that was a fun direction for me to go with him.”

To keep the return a surprise, the production went to some “funny” lengths. “On the call sheet, they didn’t want to put Matt Cohen, so they put Leonard Cohen in case anybody picked it up,” Padalecki recalls. “I was like, ‘That’s not going to be suspicious! Oh, Leonard Cohen is doing a guest spot on Supernatural. He’s going to play the troubadour.'” 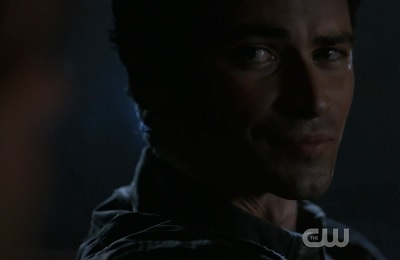 While Padalecki didn’t share many scenes with Cohen during his previous two appearances on the series, he has spent plenty of time with the actor offscreen, thanks to various fan conventions.

“Supernatural is such a unique show because even though [Cohen] hasn’t been on the show in five years, we still see each other several times a year,” Padalecki shares. “I don’t see my brother 10 times a year, but I see a lot of our guest cast. So he’s a buddy. He just became a dad. Most of the time, they call ‘Cut!’ and we’ll be like, ‘What’s going on? How’s the baby? How’s the wife?'”

“He’s a great actor, and he brought something great to the character,” Padalecki continues. “It was a really neat thing to do to use him instead of Jeffrey Dean Morgan, who I also love, because it puts Sam in an even more awkward position. It wasn’t the dad that he knew, so it had Sam really unawares… It was just such a well-thought out and well-executed script.”

Elsewhere in the episode, a ghoulpire (that’s half ghoul, half vampire) leader began forming an army because of The Darkness’ arrival, which “goes back to those unique alliances that are taking shape,” co-star Jensen Ackles describes. “People are getting their defenses together… and being like, ‘Listen, it’s not about you and me anymore. It’s about us, and we’re going to lose all of this if we don’t join forces and man up.'”

Ackles notes that struggle will mostly focus on “the brothers and those immediately around them” like Castiel, Crowley and Rowena. “It’s all these different players in the game and where they’re going to go to find safety — or if there is any safety,” he previews.

And it won’t just be ghoulpires shedding light on the mysterious new villainness. “In and around Episode 9 and 10, we’ll have some other cool characters that have some interesting things to say about The Darkness,” Padalecki teases.

“And what she is and where she comes from and how she ties into the whole thing,” Ackles adds.

Supernatural fans, what did you think of the unique Impala hour? Grade it via the poll below, then hit the comments to back up your pick!