There’s a problem with Season 9 of The Voice, and amazingly, it has nothing to do with Adam Levine’s decision to shave his head during the Battle and Knockout Rounds.

Nope, the bald pate currently rocked by the Maroon 5 frontman and former People’s Sexiest Man Alive (Whose Name Isn’t Idris Elba) has been a source of endlessly excellent zingers for his fellow coach Blake Shelton: Dr. Evil. The Blue Man Group. Powder. The common grocery-store egg. All of ’em — and many more cueball references — have been lobbed at Adam’s noggin, to hilarious effect, in the last couple of weeks.

The more troubling issue with the NBC reality juggernaut’s latest incarnation is the lack of depth in its talent pool. I’m not sure I’ve been this disengaged by what’s coming through my TV set during NBC’s Monday-Tuesday signal since Christina Millian held residency in the Sprint Skybox.

Is it just me, or is the muscular frame of ennui occupying an invisible fifth chair on the stage this season?

While you ponder that question, allow me to rank Tuesday’s Knockouts in order from least- to most-promising:

3. Team Adam: Keith Semple, “I Want to Know What Love Is” defeats Dustin Christensen, “Free” | Special advisor Rihanna gave excellent advice to both of these fellas — instructing Keith on how to improve his tone by not tightening his jaw, and warning Dustin to dial back on the vibrato — but neither of ’em listened. Yet while Keith’s clenched, karaoke cover of a dated rock ballad didn’t exactly scream “Season 9” champ, at least he hit most of his notes. Dustin’s wobbly pitch and iffy intensity devolved into a white-flag-of-surrender on the final bars — making this outcome as much a foregone conclusion as multiple gasps on Shondaland Thursdays.

2. Team Pharrell: Darius Scott, “On Broadway” defeats Morgan Frazier, “Even if it Breaks Your Heart” (Morgan stolen by Blake) | I wish once — just once — a Voice Battles or Knockouts episode wouldn’t end with a Steal… if only to introduce a tiny smidge of suspense back into the process. In any event, while both Darius and Morgan clearly have monster pipes, they’re also going to need a lot of coaching before I’m willing to bet on either of ’em surviving into December. There was such an excess of vocal showboating during Darius’ “On Broadway” that I lost any/all connection to the lyrics. True talent should exist in its own space, not jump up and down and yell “Look at me! Look at me!” Morgan, on the other hand, brought to life the struggle for artistic success in her Eli Young Band cover, but hit a lot of flat notes on the verse — particularly when she was dialing it in and aiming for something other than big, belty country. That said, I’m not upset that both of ’em advanced to the Top 20 — as long as they follow up with the kind of practice and training that results in an elevated performance level.

1. Team Gwen: Korin Bukowski, “All I Want” defeats Summer Schappell, “Little White Church” | Summer definitely brought out the sass this week, but unfortunately, it was at the expense of her intonation — and with every botched note, she opened the door a little further to allow for a Korin victory. The latter singer definitely sounded better in the Battles, but there’s an ethereal luxury to her upper register that I could listen to all day. Korin’s ability to transition effortlessly between airy and muscular might put Team Gwen in a better-than-expected position headed in the Live Rounds — so long as the “Hella Good” chanteuse can figure out the kind of dynamic (and not overdone) ditties that’ll bring out her artist’s best.

OK, your turn. What did you think of Night w of The Voice’s Season 9 Knockout Rounds? Who were your faves? How did you feel about Riri as advisor? Take our poll below, then sound off in the comments 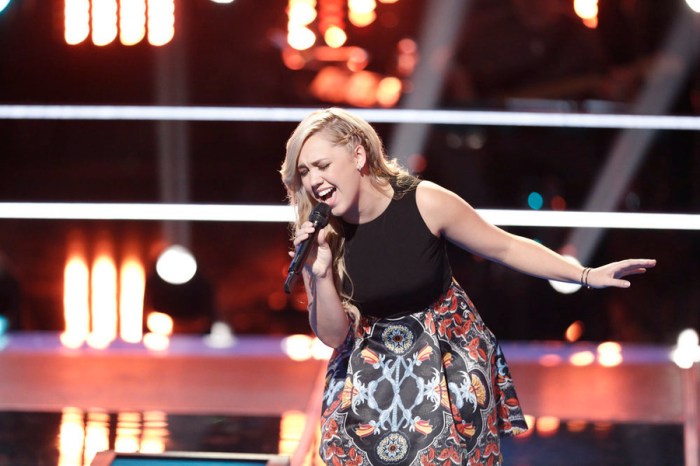